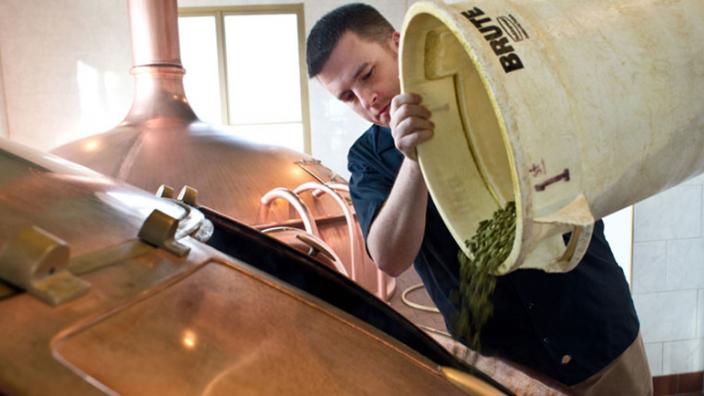 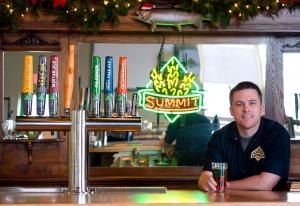 Alumnus and brewer Nick Hempfer boldly goes where many would like to go–into the inner workings of Summit. Behind the velvet curtain he reveals the magic, explaining how a potion of water, malted barley, brewers yeast, and hops becomes America's favorite adult beverage.

Nick views his work through a scientist's aperture. He majored in biology, worked in labs for a decade, and relies on this base for brewing. He also gives science the nod for landing at Summit, as the brewing industry welcomes transferable skills. "What allowed me to get the job here is that I had a varied career. Even though I didn't have a brewing background, I had an applicable science background."

The foam on top of the pint glass, so to speak, is that Summit also encouraged him to create a potion all his own–a signature formula inspired by a geeky admiration of "Star Trek: The Next Generation's" Captain Jean-Luc Picard.

A crazy idea, the pitch, and then the second largest brewery in the state's edict to Nick, "Make it so."

Growing up in a suburb of the Twin Cities, Nick chose UMD because of Duluth's extraordinary outdoor scene. His time in the Twin Ports fostered a simultaneous love of biology and craft beer, but his trajectory traversed for a while before finding its target. "Nothing is ever a straight path," he explains.

Nick's former Biology instructor Lyle Shannon concurs. He's noticed two types of students in his program. "A large percentage of our biology majors are interested in pursuing some sort of health care related career. Many are so focused on that goal that they don't consider, or aren't interested in, other career possibilities. Other students come in with just a general interest in biology, and as they go through their course work, find particular areas of interest that grab their attention." Nick was the latter group.

Years of teaching have given Lyle insight into what's needed for students like Nick, ones who aren't looking for a lab's predictability. "Sometimes there are pressures from parents to go one direction or another and students aren't encouraged to pursue what they're passionate about. But critical to your life's success is to pursue what you love."

Nick is lucky enough to not only pursue what he loves, he also has bragging rights to fusing two passions into one delicious brew.

Summit gives its brewers an opportunity to create a signature beer in its "Unchained" series. Nick's turn came last summer, not long after he started working at the brewery. He says he was equal parts excited and anxious to take the helm, especially considering how unconventional his idea was.

It came to him while watching "Star Trek: The Next Generation," where Captain Jean-Luc Picard frequently sips Earl Grey tea. "I'd always wanted to do a Star Trek beer and thought, 'There it is!"

After receiving an encouraging pat on the back from Summit, Nick got to work on a new tea beer. Each ingredient was painstakingly considered before being added to the brew. A specific malt that would compliment the Bergamot overtones of the Earl Grey was ordered, tea experts were consulted, and two varieties were tested before Nick was ready for release in August, 2015.

Its name is homage to its inspiration, "Make It So"- Captain Picard's catchphrase. The British-style Extra Special Bitter's reviews were tremendous. Cases flew off liquor store shelves to meet the demand, proving, as Captain Picard said, "Things are only impossible until they're not."

Brewing, involving giant kettles brimming with boiling wort, may feel like sorcery, but it's not. It's science.

Each batch of beer is tested in the Summit lab throughout the brewing process. "There's a lot of chemistry and biology involved," says Nick. "Beer is a living, breathing thing." The ingredients on their own are just ingredients until a controlled combination transforms them into beer.

Using this scientific know-how as a base, Nick is making his own transformation. He's found a way to turn "making a living" into "making a life."