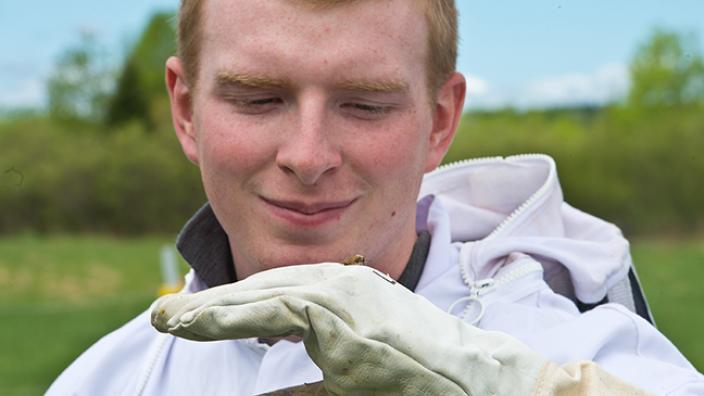 Behind every tablespoon of honey is an operation so tight, interlopers pay with pain.

When a stinging bee gets swatted, an alarm signal instigates a swarm that knows no mercy. But really, who can blame them? An estimated 25,000 hours of work goes into each sweet serving.

Unfortunately, bees' most formidable foe is shielded from their wrath. Neonicotinoid, a commonly used insecticide, weakens bees' immune systems and is responsible for a significant colony collapse in Minnesota. "Imagine the bee smoking," explains senior Michael Purtel, who, after going through most of his life without thinking much about them, has become a conduit to bees' wellbeing. 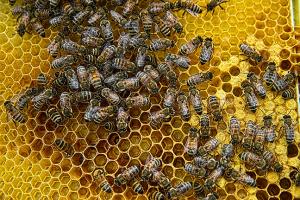 It was an invitation that he couldn't refuse. South St. Paul Representative Rick Hanson asked Mike if he'd like to tour the University of Minnesota Bee Lab, a world-renowned facility researching the colony collapse disorder.

Packing political aspirations, he agreed to the visit in order to rub elbows with Representative Hanson. But something unexpected happened: while learning how man-made factors were compounding the loss of bee habitat, he was stung by the realization that the bees needed a messenger. "There's not a lot of argument that this is happening, people just aren't aware of it." And Mike was perfectly positioned to spread the word.

As the vice president of UMD's Student Association, Mike is a natural coalition builder. He plans on teaching social studies for a few years before jumping into politics full time. The neonicotinoid issue seemed prime for advocacy... especially because all the players were lined up. They just needed someone to connect them.

In Answer to the Question

It's not like Mike's the first one to learn of the bees' plight. Nineteen other municipalities have passed resolutions banning neonicotinoids. In Duluth, City Councilor Joel Sipress tried to get a resolution passed more than a year earlier but it fell flat.

Sipress and the rest of the City Council met with Bulldogs this winter to find out what concerned students. "I asked if they'd heard about the pollinator issue," says Mike. "Councilor Sipress was the only one who had, so I told them it's something students feel strongly about.

Politics, like hives, rely heavily on a solid equilibrium. If something is slightly off, productivity is stymied. In this case, Sipress tried to get the neonicotinoid resolution passed, but it didn't seem like a large issue until Mike announced that it was important to students. "When the City Council heard that students were talking about this, that it was an actual issue to be addressed in the community– that really helped."

In March, the neonicotinoid resolution was back on the table. It would prohibit Duluth from using neonicotinoids and knowingly buying plants that had been treated with the insecticide. After some discussion, it passed in a unanimous vote.

Mike views the process realistically, humbly shrugging off credit and offering kudos to the ones who had everything in place. "I didn't do the most. I didn't facilitate. I didn't write the resolution. I was a community voice."