Seeing the Forest for the Bats 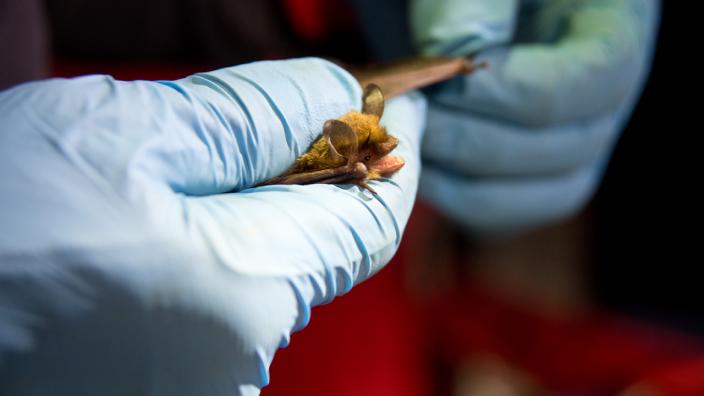 It's the dead of night in the middle of nowhere. UMD researchers are hard at work....

For millions of years, bats’ impeccable timing worked well for them. They emerge from their caves each spring just as the insects hatch. Then, bats zoom through the forests all summer long, eating insects and storing the energy as fat that sustains them through the long, cold winter ahead.

But then white nose syndrome appeared, arriving in Minnesota from the east two years ago. This non-native fungus spreads quickly through the population when bats congregate in caves to hibernate. Once established, the disease depletes the bats’ energy stores causing them to leave the caves too early in the spring, before the insects hatch. Without food, the bats weaken and die. 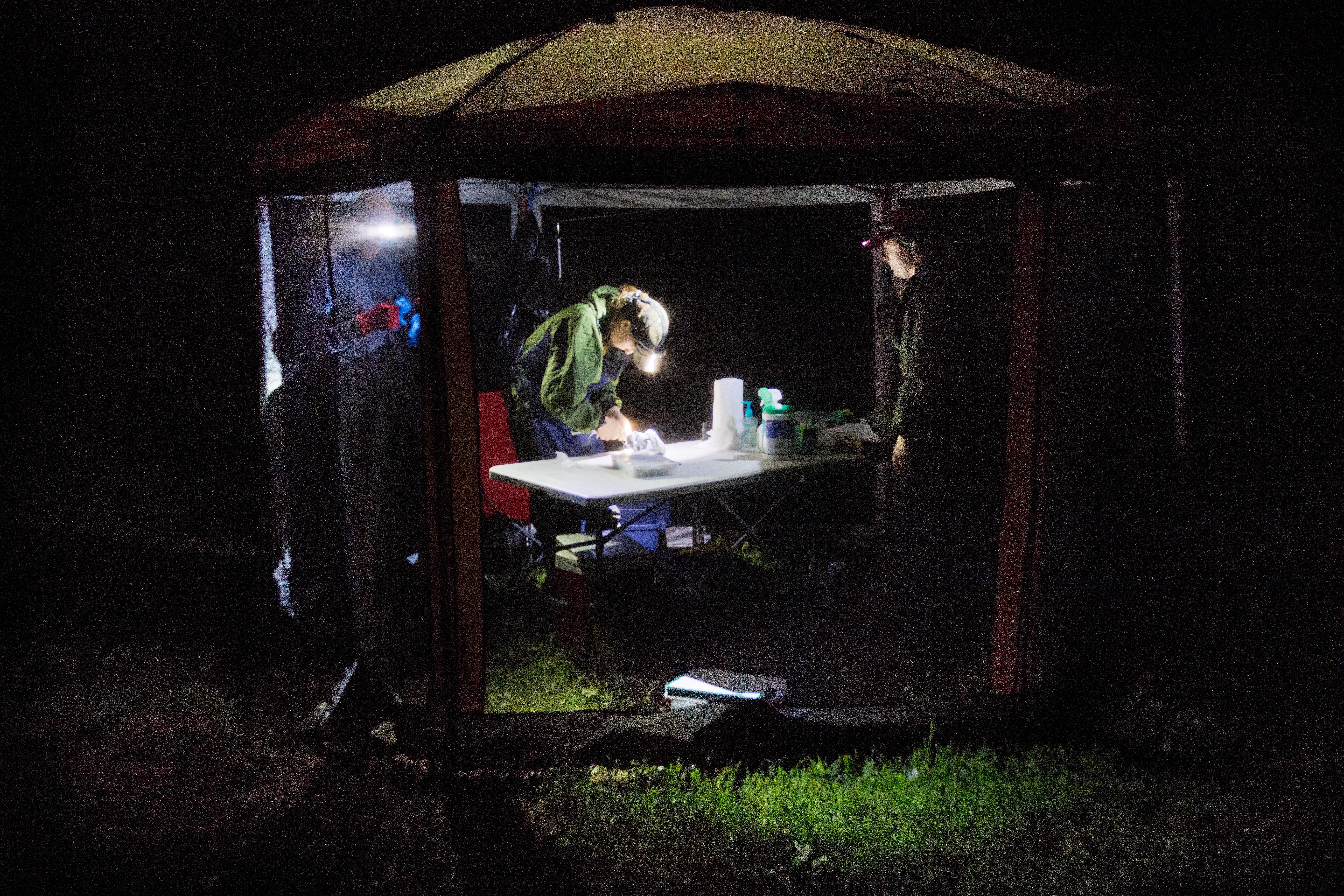 Ron Moen, a biologist who specializes in wildlife research, was ahead of the problem. In a preemptive move, he and Rich Baker at the Minnesota Department of Natural Resources proposed a study before the fungal problem hit Minnesota bats. They wanted to know where in the forest the northern long-eared bats live, when they bear young and how long they stayed in the forest.

“A lot of the bats people see – in their buildings and attics – are little brown bats. The northern long-eared bats that we’re studying almost always roost in trees, in a woodpecker hole or other openings or under loose bark,” said Moen. “With the knowledge we’re gaining, we’ll know which trees we have to be more careful with to protect those maternity roosts.” 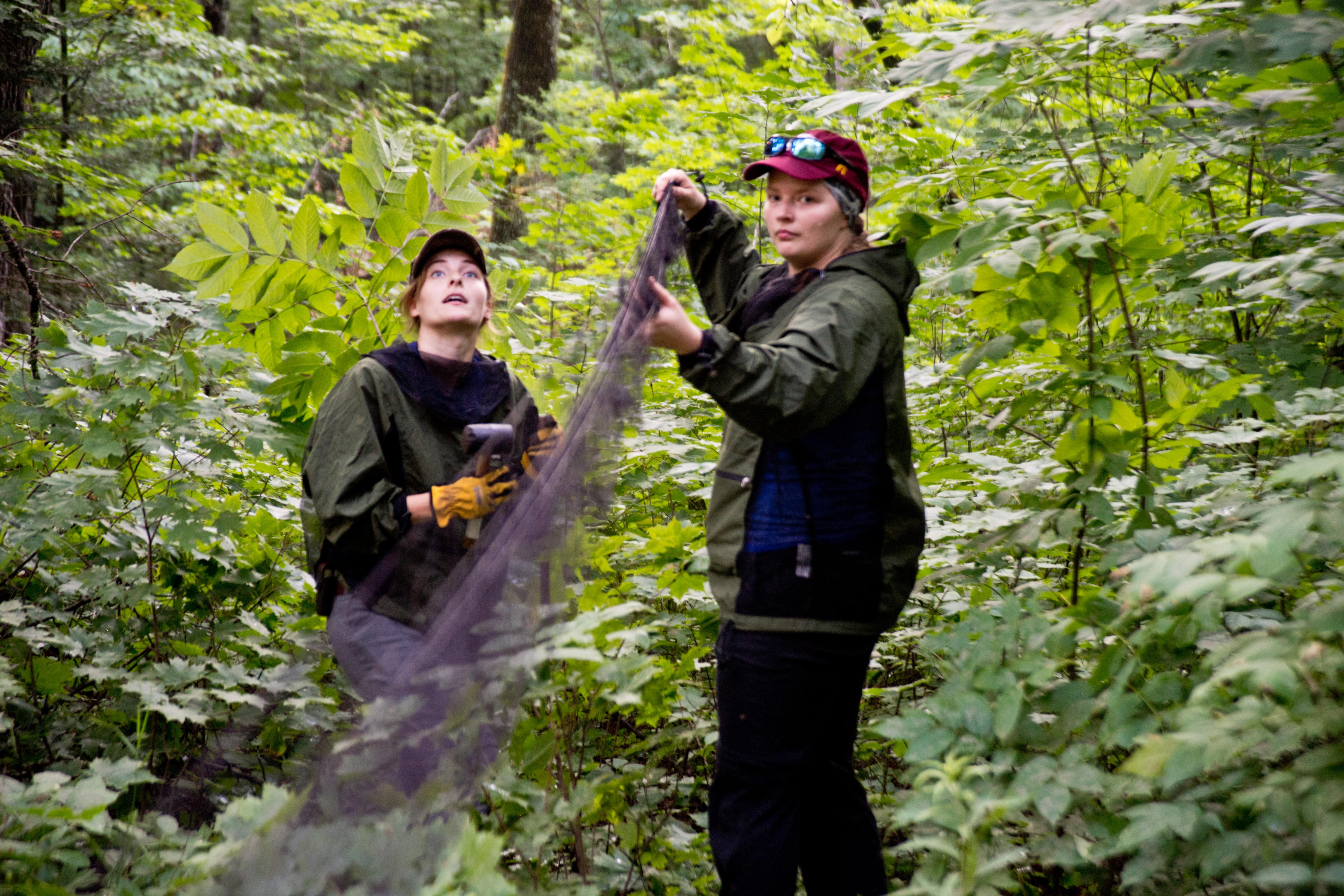 Recently, Moen's Natural Resource Research Institute (NRRI) team spent most of a night in Nemadji State Forest, about an hour south of Duluth, in effort to add to this knowledge.

They started setting up around dusk– which is a task in itself. The four researchers split into two teams and set up nets in the trails' natural corridors so they serve as a tunnels to trap the bats. This involves cutting branches and hammering stakes into the ground for the poles. The whole process takes about 20 minutes for each net. Their persistence pays off.

The recent appearance of white nose syndrome hit Minnesota’s northern long-eared bats as devastatingly as in other locations, with about 90 percent mortality. It’s a real problem for humans to lose that many natural mosquito controllers, especially as the insects carry diseases like West Nile virus.

The northern long-eared also hibernate and roost communally in large numbers so the syndrome spreads quickly. Further hampering the propagation, the females birth only one “pup” per season.

Minnesota is home to eight bat species, four of which are vulnerable to white-nose syndrome. 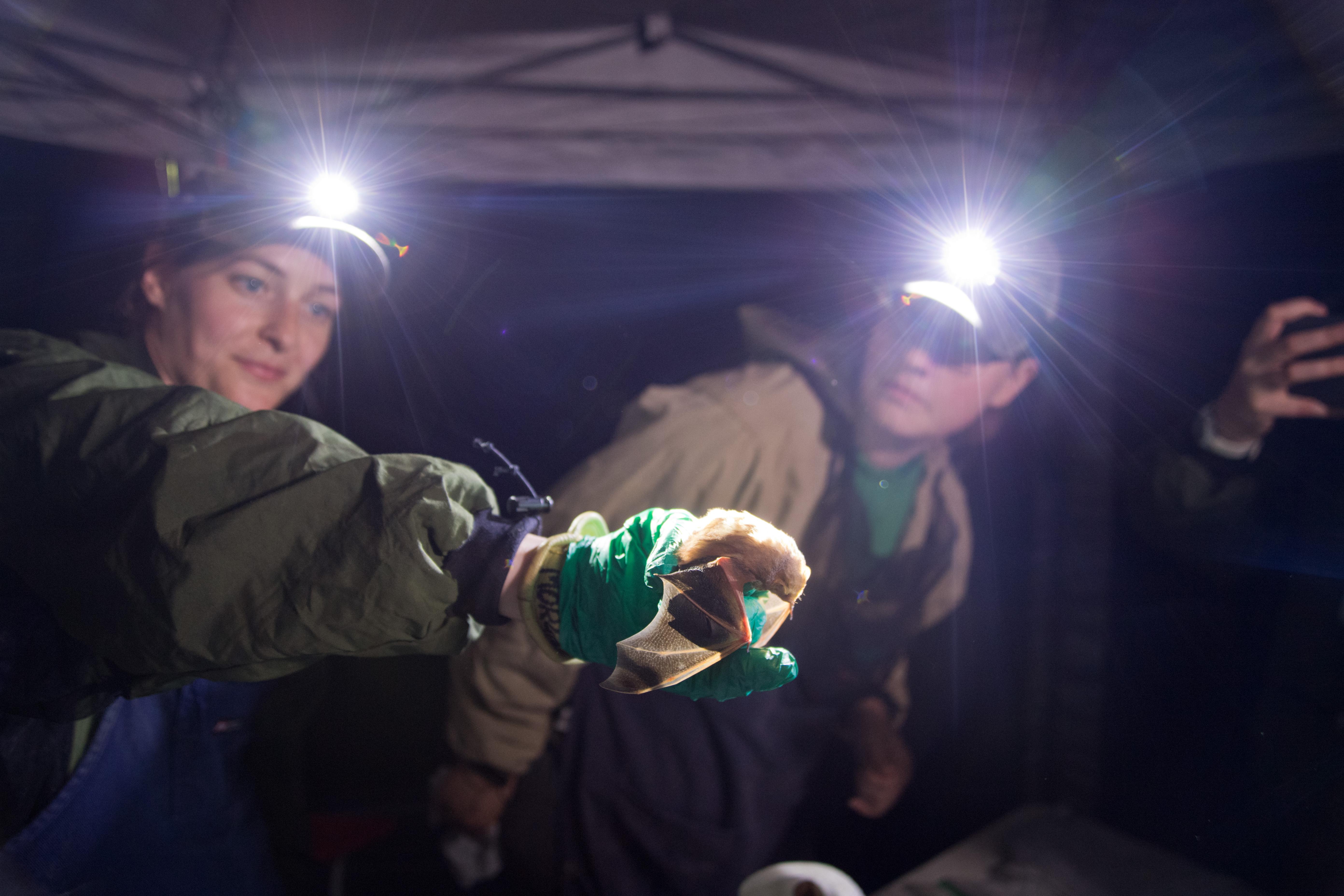 NRRI researcher Morgan Swingen weighs and identifies each bat that is caught. She checks the nets every fifteen minutes throughout the night.

Moen has an advantageous dual appointment with UMD. His wildlife research through the Natural Resources Research Institute ranges from moose to martens to turtles, answering questions specific to challenges and changes in the environment. In the case of bats, understanding how this threatened species uses the forest helps inform forest management decisions, which is important to Minnesota’s vibrant wood products industries.

As a biology professor in the Swenson College of Science and Engineering, Moen has ready access to a pool of talented biology students at the graduate, undergraduate and recently graduated levels.

“This is a big project that received just over a million dollars because it takes a lot of people to do this,” said Moen. “But it is really great experience, looks good on their resume, and when they do a good job I’m always happy to serve as a reference.”