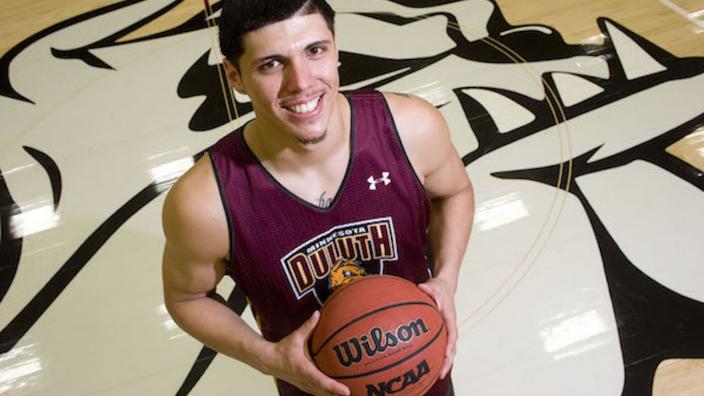 Hot Shots Might Win a Game but Teamwork Makes a Good Season.

Brendon is a team player and the sports page writers have noticed. In fall 2015, Brendon, along with fellow seniors Pierre Newton and Taylor Lavery perfected a power play that earned them the label, “The Three-Headed Horseman.”

Brendon Pineda-Morales is one of the seniors on UMD's basketball team, and he knows the younger players follow his lead.

Brendon has more time to set an example because he received one of UMD’s prestigious scholarships, the Goldberg Family Men's Basketball Scholarship. He doesn’t waste that time either.

"In the weight room and during practice, I push myself and set an example for my teammates," he said.  "Outside of practice, I use my spare time to get in the gym to better myself as an individual."

Brendon knows how to win. Consider his background. In Arizona, he played for Phoenix (Junior) College when they won the National Junior College Association Championship.

"When every player has respect for others and strives for their personal best, they create a team that can go the distance,” he said. Teamwork is Brendon’s motto. “When we got to the championship game, it wasn’t because of any one player. It was because we played like we were a single dynamic force.”

Brendon sets an example because he knows teamwork is the way to win. The Minnesota sports writers have noticed. In fall 2015, Brendon, along with fellow seniors Pierre Newton and Taylor Lavery perfected a power play that earned them the label, “The Three-Headed Horseman.”

He’s got a long list of accomplishments. At UMD in spring 2015, he won the NSIC outdoor shot put title. His high school honors begin with academics. Brendon finished in the top three percent of his class. He excelled in sports. He was a leader in track and field, then football, and finally found his most successes in basketball. 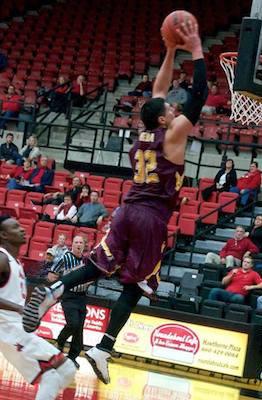 "I looked up to my older brother and the way he played basketball, and I went to watch him play in the first varsity game of the summer league," he said.  Roger Lefebvre, the coach of the Tolleson Union High School team, came up to Brendon and asked if he wanted to play.  "I didn't know what he wanted at first because I hadn't even started my freshmen year in high school, but he invited me to suit up and play in the game that day." Brendon was sent into the game. He immediately took an offensive rebound and then scored with a put-back lay-up, all within 90 seconds.

“That first basket was all it took,” said Brendon. “I was hooked on basketball.” And basketball was good to him. He was named the Tolleson Male Student Athlete of the Year in 2011 and Desert West Region Player of the Year in 2010-2011. Three years later was when he helped Phoenix College win their first National Championship.

Brendon is about more than athletics. The appeal of his criminology major starts with his desire to help people and his interest in the court system. Juvenile protection, adult probation, preventing unjust incarceration, and victim advocacy are all on his research list.

“No matter where I go, the lessons I have learned as part of a team will stay with me,” he said. Brendon talked about building trust and listening to each team member, not only the loudest voices. He appreciates people who step back to make sure everyone feels valued. “We can do better on a good team than we can alone,” Brendon said. “That’s the real secret to success."

For more information about the criminology major, see Criminology B.A. or visit the College of Liberal Arts website.