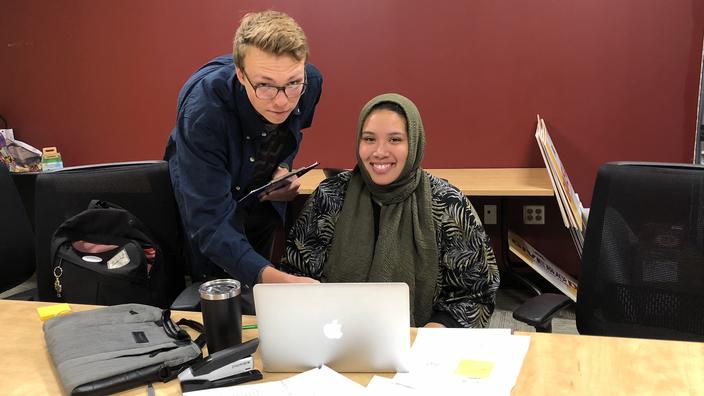 Involvement in student organizations prepares Ayah Abuserrieh for a career in law and politics.

Ayah Abuserrieh sat in the café waiting for her cousin to return. It was the middle of the night in Vienna. Her cousin had been gone a long time, too long. “I felt it in my stomach,” she says. “I was afraid something bad had happened.”

They were in Vienna. It was their first time venturing in out without their uncle. They were breaking his rule to never go out at night in a strange city. It wasn’t until after they drank their smoothies, they realized they could not use American money to pay. Her cousin set out to exchange their money while Ayah waited. It was only going to take 10 minutes, and over an hour had gone by.

Ayah paced, her head swimming, and her heart racing. "I thought something happened to her, that she was hurt or someone took her." When she finally calmed herself, she looked up and saw her cousin. She was flooded with relief.

“I felt like I was going to die.” That moment and the powerlessness of the situation stayed with Ayah. “I’m not afraid of death, but I am afraid of meeting God empty handed.” The scare in an Austrian cafe reaffirmed Ayah’s faith. When she arrived at UMD, she made a commitment to go into to politics so she can help others, and accomplish as much as she can in this life.

Ayah is a sophomore majoring in philosophy and political science.  In addition to her classes, she serves as a Student Association representative at large, and as vice chair of the Student Congress. Her positions allow her to speak out about her opinions and open up the discussion. Ayah knew she wanted to be a part of the Student Association during her first fall semester on campus. “I’ve always loved politics, and I hope to work in government one day,” she says. “I love being involved on campus.”

She is also a student affairs director for Bulldog Republicans and in 2017-18 served as vice president of Muslim Student Association.

She is proud of her work on the Muslim Student Association where last year she was able to orchestrate Islamic Awareness Week. “Islamic Awareness Week has an impact on the whole campus.” she says. “So many students want to learn about different cultures in the world. The events we put on let us share our faith and traditions.” The events included painting hands with henna and serving traditional foods.

The week before the event, anti-Muslim statements were seen on social media, which raised concern and conversation. It stirred mixed feelings among the organization. Ayah felt so strongly about the work they were doing, she encouraged the group to continue their plans. Islamic Awareness Week ended up being a “massive success.” Ayah had the opportunity to speak out about the organization and increase attendance. She tabled every day. This gave her the opportunity to teach and share with others a deeper insight about Islam. Fox news even did a story on her.

Ayah was born and raised in Rochester, Minn., but now lives with her father in Chicago. She enjoys spending time in the Chicago’s Little Palestine neighborhood and Burbank, Illinois with her family and cousins.

When asked about the future, Ayah said she felt like she had a lot more to accomplish in her life and feels equipped and confident. “I still am driven to give more.”