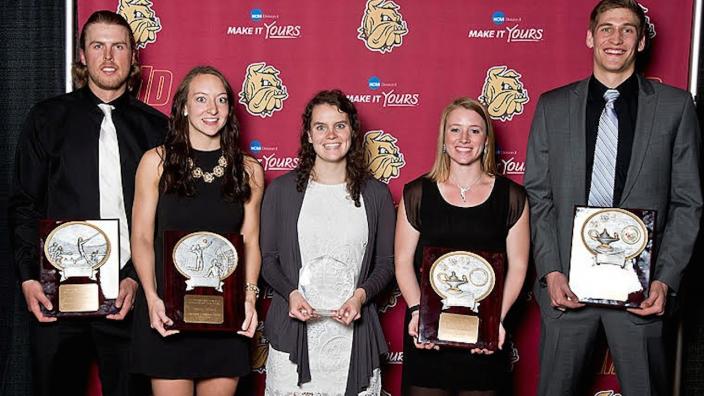 In addition, senior soccer forward Kate McMahon was the recipient the Shjon Podein Community Service Award, which has been presented annually since 2003 to a UMD student-athlete who best exemplifies leadership qualities on and off the field of play and has made noteworthy humanitarian contributions in the Duluth and University communities.

The night also included the awarding of the Chancellor's Cup to the women's basketball Bulldogs -- for the third straight year -- for maintaining the best collective grade point average during the last two semesters (3.46) of any UMD team.

Arguably the most potent power hitter to ever wear a Bulldog uniform, Wojciechowski (or simply "Wojo") will exit the UMD program sometime later this spring as its all-time leader in home runs, runs batted in and hits. As both a rookie and junior, he collared Daktronics All-American honors and received All-Central Region citations from three different entities those same two seasons. The Coon Rapids, Minn., product certainly has saved some of his best baseball for last as this year he's already set a UMD single-season record for home runs with 20 and currently possesses the best slugging percentage of any NCAA Division I, II, and III player in the country. A member of the Northwoods League's Duluth Huskies during the summers of 2013 and 2015, Wojciechowski also sports a .402 career batting average, a figure that ranks him second on the school's all-time charts.  Since Wojciechowski and the current group of seniors first enlisted their services, UMD has improved its victory total in every year, including 35 wins in 2015 -- the second-most in team history.

Wohnoutka, a junior biology major who maintains a 3.97 GPA and will graduate this May, earned a NSIC Myles Brand All-Academic with Distinction Award in 2015-16 and was UMD's nominee for that conference's Willis R. Kelly Scholar-Athlete Award. Besides qualifying for the Swenson College of Science And Engineering Dean's List all five of her previous semesters, the Luverne, Minn., native, and 2016 team co-captain was the recipient of the UMD Biology Department's Ed and Alma Turcotte Scholarship and T.O. Odlaug Award. Wohnoutka, an All-NSIC Academic Team honoree as both sophomore and junior, has been accepted into the Physical Therapy Doctoral Program at the Mayo Clinic in Rochester, Minn.  She paced the Bulldogs in singles victories in each of her three collegiate seasons, including in 2015 when she went 9-7.

A center from Spring Valley, Minn., Harder has compiled a 3.83 cumulative grade point average while majoring in exercise science. During each of the past three years, he's secured a spot on the NSIC All-Academic Team and has not failed to make the College of Education and Human Service Profession Dean's List since enrolling at UMD in the fall of 2011. Harder is also a 2015-16 NSIC Myles Brand All-Academic with Distinction Award recipient   On the court, Harder served as the Bulldogs' student manager for two years before being called into action during the 2013-14 season. The three-year letterman wound up playing in 43 games with the Bulldogs, including 13 as a starter. Harder's post-graduation plans are to attend Des Moines University and enroll in its Doctor of Podiatric Medicine program.

Since her arrival on the UMD campus in the fall of 2012, McMahon has been heavily involved in an array of volunteering endeavors, including the Mentor Duluth Program (Big Brothers/Big Sisters), where since last summer she's been matched with a young teenage girl. The three-time NSIC All-Academic Team qualifier and Fitchberg, Wis., native has also volunteered her time at the Aftenro Home (a nursing home facility in Duluth), the Boys and Girls Club of the Northland, Duluth's Congdon Park Elementary School, and the Saint Vincent DePaul pharmacy in Madison, Wis. In addition, McMahon spearheaded a "Kicks For Causes" fundraiser for Mentor Duluth at one of UMD's home soccer game this past fall while also assisting with the team's Salvation Army Adopt a Family project for a fourth straight year. She'll graduate next month with a triple major (biochemistry, chemistry, and Hispanic studies) and attend the Osteopathic Medical School at Marian University this September.