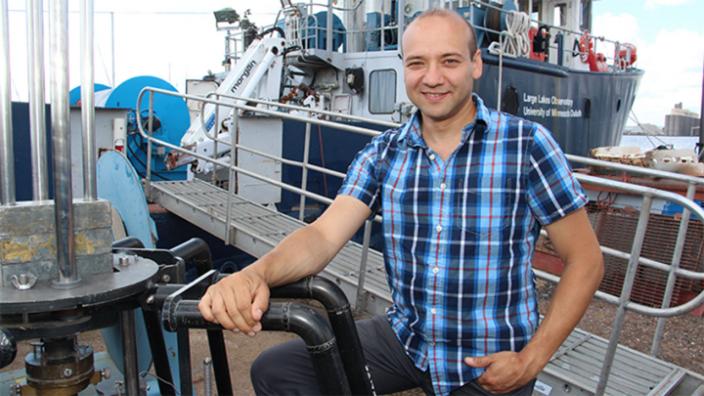 Research demonstrates how some data collected from large lakes, like Lake Superior, can be used to learn more about ocean environments.

UMD Associate Professor Sergei Katsev is featured in the current issue of Earth magazine after sharing some exciting research conclusions. Katsev worked with Sean Crowe, a professor at the University of British Columbia, to develop a mathematical formula that has major implications for people studying oceans and the evolution of climate throughout earth’s history. In addition, Katsev’s research demonstrates how some data collected from large lakes, like Lake Superior, can be used to learn more about ocean environments, too.

Katsev said his work is largely building on what is already known. “We’re basically issuing a correction and new information on a law that has been in place for a long time,” he said.

The scientific law he refers to is the rate at which organic matter decomposes in oceans, as well as lakes, which is basically a function of time. A related quantity is the tiny amount of organic matter that survives degradation and is buried in ocean floors. Katsev’s research provides a mathematical link between these two factors. He explained, “Finally, we are able to connect the rates we see in modern oceans with their consequences on geological time scales. The burial of organic material into sediments affects the amount of greenhouse gases - carbon dioxide and methane – in the atmosphere. It also determines the amount of oxygen in the Earth’s atmosphere, which for most of our planet’s history was very low and unsuitable for breathing.”

The breakthrough will allow people to better determine the makeup of ancient oceans or what the future of our oceans will look like based on current measurements. Surprisingly, research results came from data obtained in lakes and from comparing them to ocean measurements. Katsev said it was far from obvious that lakes and oceans could have the same breakdown and mineralization characteristics due to the differences in their chemical makeup. For years, he and many other scientists have been collecting samples from large freshwater lakes including Lake Superior, Lake Matano in Indonesia, and East African Lakes Kivu and Malawi.

“When you look across systems and compare large amounts of data it becomes obvious that these rates apply to both lakes and oceans. This is useful, because it gives us confidence we can apply these relationships to many different environments, including the ancient oceans when seawater chemistry was very different from today,” said Katsev.

The discovery Katsev and his colleagues have made was somewhat of a happy accident. “How do you discover anything really?” said Katsev. “You’re looking at data and suddenly you think ‘Oh, this is weird’ and then you start asking questions.”

Katsev is excited about the potential of future study and his background in physics and modeling are fueling further exploration. He works at the Large Lakes Observatory, a research institution within UMD’s Swenson College of Science & Engineering (SCSE). He said, “Knowing we can now use lakes to study ancient oceans has opened up the possibility for much more research.”

Earth magazine is published on-line monthly and the article about Katsev’s research is available at:  http://www.earthmagazine.org/article/ocean-oxygen-levels-control-seafloor-carbon-burial

In 2015, SCSE enrolled 3,102 undergraduate and 221 graduate students. The College is home to ten academic departments, in addition to the Large Lakes Observatory, the UMD Air Force ROTC program, and the Iron Range Engineering program, and connects students with hands-on research opportunities through its collaboration with multiple research institutions and area businesses.