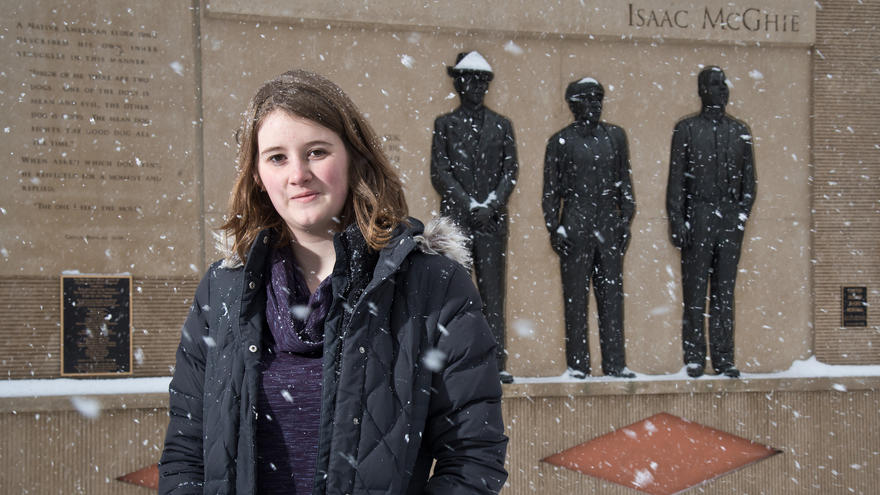 Newspapers and books are spread on a table. The newspapers are from 1920s and the books were written much later, but they both report and discuss the lynching of three circus workers in downtown Duluth. Dr. David Beard, associate professor of rhetoric, and Nora Curtis, a biology major and writing studies minor, read through the material carefully.

The Associated Press called the lynching Duluth’s “dark and ugly secret” and it’s the (sometimes unspoken) core of an oral history project on anti-racism. Nora is helping by conducting additional research and transcribing Beard’s interviews. 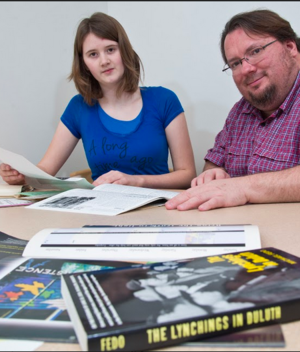 When she was offered the position, she was hesitant at first. “It seemed like a sensitive subject, and I was just looking for a job.” However, once she traveled deeper into the project, she realized the impact this information could have on her life.

Nora is assisting two professors, Beard and Jamie White-Farnham, associate professor of writing at the University of Wisconsin-Superior, who are both recording oral history and examining anti-racist activities in the Twin Ports.

When Nora went home for 2018 winter break and had the opportunity to transcribe a few more of Beard’s interviews, she began to apply what she had learned to her own life. “I started to notice things and think more critically about the people around me and to appreciate diversity more. But I had to notice it first.”

“The history of racism in Duluth is well documented, beginning with the lynching of Elias Clayton, Elmer Jackson, and Isaac McGhie on June 15, 1920,” Beard says. “The story Jamie and I want to tell is the story of anti-racist activities since the late seventies, when community writers, artists, educators, and activists began healing the wounds of racism in our community.

The book The Lynchings in Duluth by Michael Fedo appeared in 1979. Funds were raised and artists were commissioned in 2003 to create a Clayton Jackson McGhie Memorial at the site of the lynchings. Beard and White-Farnham are documenting the work the community has done in these and other activities to further anti-racism.

A Minnesota Historical Society Oral History Grant supported Beard and White-Farnham’s efforts to interview community members involved in anti-racist activities. They interviewed Michael Fedo and many others, including Heidi Bakk-Hansen, local writer and activist involved in the CJM Memorial; Henry Banks, local activist and host of KUWS radio show “People of Color;” Carl Crawford, local activist and member of Duluth NAACP; Carla Stetson, activist and sculptor of the CJM Memorial, and many others.

The researchers also collected oral history on a more contemporary topic. A broad group of organizations in the Twin Ports launched the Unfair campaign, an anti-racist advertising initiative, in 2013. There was a forceful backlash from the community and the campaign was abandoned.

Beard and White-Farnham gathered statements from the people who worked on the Unfair campaign’s implementation. They heard the stories of leaders in organizations that supported the project as well as reflections from the creative team.

When the transcripts of the interviews are complete, they will be archived in the UMD Library archives as well as the Minnesota Historical Society archives in the Twin Cities.

Beard sees historical significance in documenting anti-racist efforts. “We are working to record healing and to learn from the past.”

Nora says it's important to bring attention to anti-racist activities in Duluth. She says, “[The Clayton Jackson McGhie Memorial] brought attention to what was wrong in the past and what hasn’t been addressed. The research project tells ... what is going on in Duluth to prevent this sort of thing from happening again.”