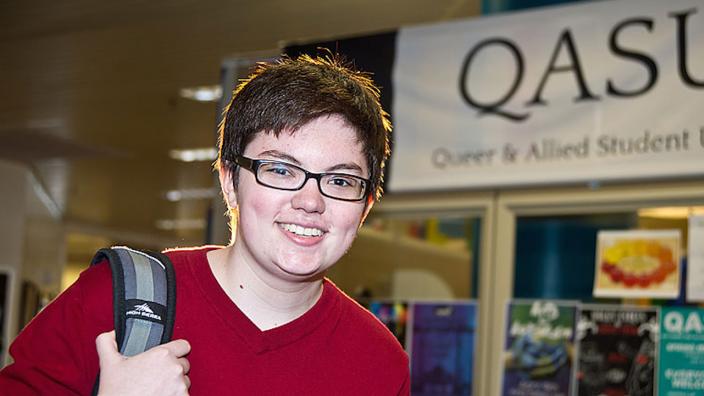 UMD senior Charlie Johnson is being awarded the prestigious Philanthropic Fund Foundation (PFund) scholarship this spring, and it's the third time he's won it. "PFund is the premier grant-making agency in the region for LGBTQ+ leadership and policy analysis," explains Assistant Professor George Hoagland, who wrote a letter of recommendation for Charlie.

George has been a reviewer for the PFund so she knows how competitive the scholarship process is, but she isn't surprised by her student's triple success. "He's Ivy League material, but he chose to be here and to minor in LGBTQ Studies. If you know him, you know what a wonderful student, thinker, and community member he is."

Beyond enhancing his community, Charlie is empowered by Duluth. It's a place that called to him, repeated itself, and then welcomed him home.

Cities, divided only by a border, can be worlds apart.

Charlie grew up in Hermantown, Minn., a small community to the west of Duluth. He spent his days reading and writing with equal vigor, culminating in a reporting gig for The Hermantown Star when he was just 13-years-old. For Charlie, one begets the other, "I've always been an avid reader. Most of my writing skills come from reading a lot."

Ernest Hemingway, Pablo Neruda, and Rebecca Skloot are three of his favorites– authors who perfectly mix research and storytelling. They offered an escape from a hometown that didn't feel like home.

A new chapter began when Charlie enrolled as a Post Secondary Enrollment Option (PSEO) student his junior year of high school. He describes the experience as "shocking," which would seem overstated out of the context of his story. After all, he spent his whole life as Duluth's neighbor. But it's what he found within UMD that completed his sense of purpose.

UMD's Queer and Allied Student Union is nestled inside UMD's Multicultural Center. It's a spot designed to celebrate the diversity of the queer community, something Charlie hadn't found growing up. "When I first met this group, it was a culture shock. I'd never met so many people who were like me."

He transferred to Concordia at Moorhead after completing the PSEO program, but Lake Superior, as it's been known to do, drew him back after only a year away. "I have a really weird connection to Lake Superior and it was hard to be away from it," he explains. "It's a feeling in your heart. I was aching for Superior."

Besides its proximity to the lake, Charlie also describes Duluth as where his support system is, "We all have each others' backs." Charlie appreciates having access to queer resources and says if he has questions he can easily find someone with answers.

But as he approaches graduation in December, Charlie is the one answering the questions others forgot to ask.

Charlie's mind was honed into journalistic thinking admirably early. He's been a paid writer since before he could drive to his assignments. Now, as an LGBTQ minor and a Writing Studies major, this thinking is being directed towards topics both meaningful and understudied.

Charlie's writing projects are focused on transgender health care, LGBTQ elders and aging, and intergenerational trauma in the LGBTQ community.

"I am driven by the idea that I can make a difference in the world by sharing my stories and experiences as a queer, transgender individual from rural Northern Minnesota." says Charlie. "I hope that through research and writing projects, I can use my voice to shed light on the issues facing queer communities."