Handcrafting a career in films.

When five-year-old Sara Olson’s Barbie needed a new outfit, she pulled up to her mom's sewing machine and got to work. When President of District 13 Alma Coin needed a cape, Sara sewed it. Both Barbie and Hunger Games' President Coin donned handcrafted clothing because Sara, '91, has a skill. "I make things that you can't make with a computer," she explains. "The things that I create have to be touched by my hands."Never stagnant, Sara grew her craft by adding layers of knowledge over the years. It was in the middle, while at UMD, when this craft caught fire.

"She was so good from the very start," remembers Laura Piotrowski, UMD's costume shop supervisor. Sara had started hanging around the costume shop because her husband was in shows. Laura noticed Sara's skills and quickly got her a job. "When they come in here already knowing how to sew, you can teach them so much more, as opposed to someone who hasn't sewn anything since that pillow in seventh grade."

Sara was soon making patterns and draping in the shop while taking every related class that was offered, even the ones that weren't required for her bachelor of arts. "This ended up being a huge boost to my career because these classes were directly applicable," she says.

Laura lived with Sara's family one summer while they both worked at Vee Corporation, the place where the Sesame Street Live characters are born. "Sara would come home, make dinner, play with her kids until bedtime, take a nap, then get up and study until the middle of the night," says Laura. "She worked insane hours and did incredible at everything. She did well with her family, she did well with her studies, and she did well with her work."

Eventually that work looped further south and into the classroom before circling back to her sewing machine, where the odds were in her favor. 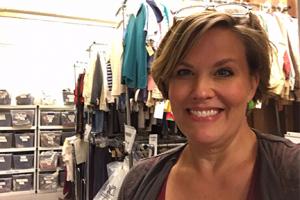 The Peach State of Things

When her husband's company relocated to Georgia twelve years ago, Sara continued to learn, getting a master's degree in education. "I like making boxes and decorating boxes, not living in a box," is Sara's way of explaining that the school she was at wasn't a good fit.

She switched to teaching at the collegiate level, at Brenau University. One of her colleagues happened to be working on the costumes for "The Walking Dead." "You can make a lot more money working in film," he told her. She made the leap.

That was only four years ago, but her resume already reads like a Hollywood veteran. The place that they moved to for her husband's work turned out to be fertile ground for Sara's talent. Last fiscal year, television and film generated $6-billion for the Georgia economy.

"Hunger Games was my fourth movie, which was lucky, but I also have a high level of skills- like sewing, cutting, and draping."

The Argument for Authenticity

Sara's job security didn't appear in her parent's crystal ball. They tried to talk her into studying education instead of theater, thinking it would bring their daughter a lifetime of stability. But Sara argues there are ways that you can make money doing what you love to do. "My job is always going to be needed. Even De Niro has to have things fit and shortened."

This knack for craft is unique. Laura says that most of the students who come into her shop these days have never created. "They're not being taught how to see something and how to fix it, or how it works. They're whizzes at computers or electronics, but not problem solving."

Sara's advice to these students? "Learn a skill. You have to learn a craft."

You just never know where it will take you.