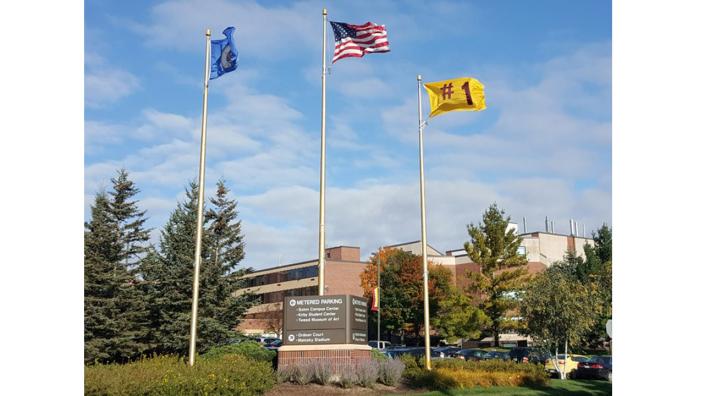 UMD and Athletic Director Josh Berlo have agreed to a two-year extension, now running through May 1, 2023.

This is an extension of the five-year contract that Berlo signed in November of 2015.

“Josh is a tireless advocate for student athletes. I am confident in the direction and leadership Josh has set for UMD Athletics as it achieves new heights in community engagement, academic experiences, and competitive success,” says Chancellor Lendley (Lynn) Black. “He is a strong advocate for UMD and is leading the much-needed renovations of the physical spaces in which our athletes compete.”

This includes plans to renovate Romano Gymnasium, which is the hub for Bulldog Women’s Volleyball, Men’s and Women’s Basketball, academic and recreation space, as well as a community programing.

"I wish to express my sincere appreciation to Chancellor Black and the senior leadership of UMD for the opportunity to continue to lead Bulldog Athletics. In addition, I would like to thank Bulldog Country for their ardent dedication and commitment to our outstanding athletic programs. Their unconditional support has enabled our remarkable student athletes, coaches, and staff to achieve unparalleled success in our Bulldog mission, while concurrently building the infrastructure to sustain and further these accomplishments,” says Berlo. "I am honored to serve this University and its great traditions as we strive together to be the best Division I and II institution in the NCAA.  Personally, my wife Megan and I could not be happier to continue to be a part of the UMD and Duluth communities."

Berlo came to UMD in 2013 from the University of Notre Dame after a more than 13 year tenure, serving as senior assistant athletics director for guest relations and event marketing prior to his arrival in Duluth.

As UMD’s director of intercollegiate athletics, Berlo supervises UMD’s coaches, staff, and administrative personnel. He also develops and implements the strategic plan, manages an annual departmental budget of approximately $10 million, directs the use of UMD athletic facilities, and leads fundraising and marketing efforts.

Dr. Stephen B. Castleberry is the NCAA faculty athletic representative at UMD, a position each NCAA institution designates to a faculty member in an effort to ensure academic integrity of its athletic program. Castleberry says Berlo’s commitment to his athletes’ education is evident in their record setting grade point averages:  3.14 in 2013-14, 3.18 in 2014-15 and 2015-16, and 3.21 in 2016-17.

"Josh truly lives and leads with the ‘three C’s’ of UMD Athletics at the forefront:  classroom, community, and competition. I am excited about this contract extension."

Part of Berlo’s directive to his department is to create a strong community bond. The hours that student athletes, staff, and coaches are engaging with the community has risen from approximately 2,000 in 2013-14 to more than 3,000 in 2016-17.

Berlo leads by example through his own service on the American Cancer Society's Minnesota State Leadership Board and the North Country Trail Association National Board. Berlo is also a volunteer with the Superior Hiking Trail.

Competitive excellence has been the backbone of UMD’s athletic program since its inception in 1931. This has spread to nearly all of UMD’s teams under Berlo’s leadership.

During Berlo’s tenure, 13 of UMD’s 16 varsity programs have competed in NCAA Championship events, including the return of Women's Hockey to the NCAA Tournament in 2017 after a six year absence and the 2017 Men’s Hockey Frozen Four appearance. The 2016-17 consensus National Women’s Hockey Head Coach of the Year, Maura Crowell, says she’s pleased that Berlo will continue to lead the athletic department through 2023. “There are many positives happening on campus as a result of Josh's leadership. He's been a great supporter of the women's hockey program, and I love the direction that our entire department is moving in."

Bulldog Athletics has a rich history of continuous improvement, which continues to be a focus under Berlo’s leadership. Examples include:

The UMD Department of Intercollegiate Athletics mission is to create a strong sense of pride amongst Bulldog Country through academic superiority, strength in community and competitive excellence.

Now in its eighty-seventh year of operation, it continues to maintain one of the most competitive and balanced sports programs of its size in the country.