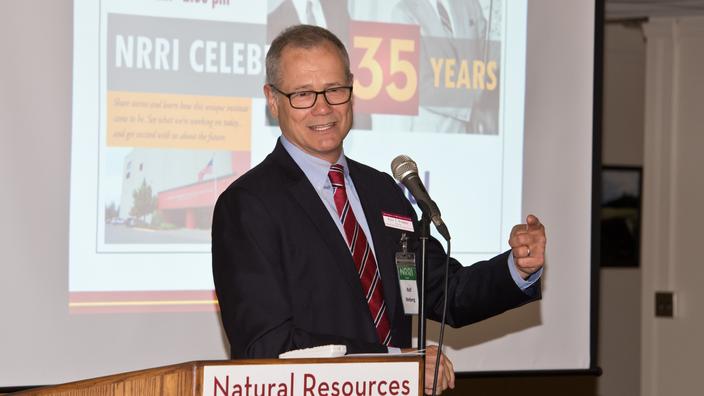 NRRI highlights collaborative research spanning 35 years and gets excited for the future!

If just one word was allowed to describe NRRI, it would be “collaborative.” NRRI researchers reach out to the talents in the University system, across the state to industry and agency partners, and further still to innovators around the globe.

On August 10, NRRI celebrated the legislative and community collaboration that formed the institute in 1983. A gathering of legislators, industry, agency and university stakeholders viewed NRRI’s newly remodeled lobby with a timeline highlighting examples of projects over the decades.

Representative Mary Murphy was one of the original legislators who promoted the establishment of the institute. She shared stories of growing up in the neighborhood and witnessing the struggles of the economy of the 1980s that NRRI was formed to address.

NRRI’s first permanent director, Michael Lalich, spoke about establishing the institute structure and mission and highlighted accomplishments of the staff over his 30 years at the helm.

“I was asked to highlight my favorite success stories, but that’s so hard to do,” he said. “There are just so many.” Among others, Lalich mentioned early assistance to Duluth-based Epicurean and Loll Designs, and Northern Contours of Fergus Falls, which continue to grow and create jobs. He added that taconite industry R&D in Coleraine has also been a boon to the Iron Range over many years.

“These two men exemplify the spirit of this new flexible and creative space,” said Weberg. “Our researchers will use it to explore opportunities and solutions with our stakeholders and partners to continue providing innovations for the challenges of our state and beyond.”

“It’s exciting to build a future on the solid foundation of the past 35 years,” added Weberg. “Our comprehensive and collaborative approach makes NRRI nationally unique. With continued support, we’ll help prepare Minnesota for the economy of the future.”