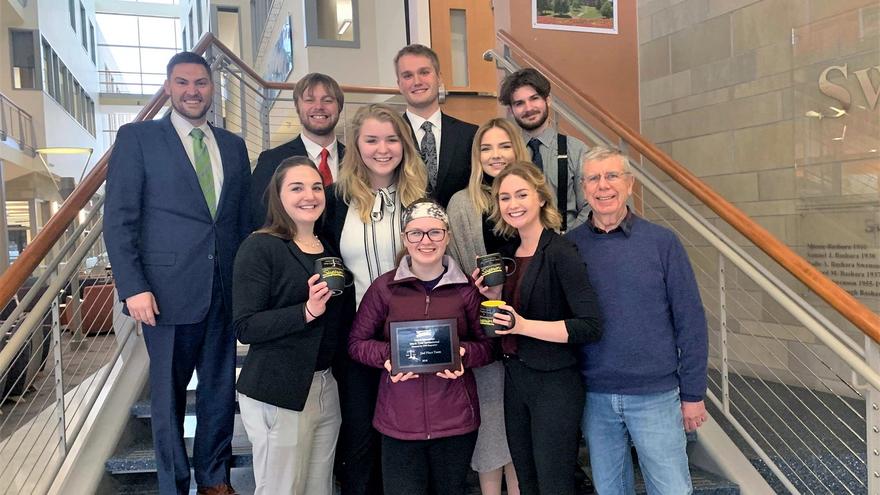 The UMD Mock Trial Competition Team enjoyed outstanding performance this past weekend at the University of Wisconsin-Superior Durst Mock Trial Tournament. Assistant Professor Nathan LaCoursiere from the Department of History, Political Science and International Studies is the team's advisor. 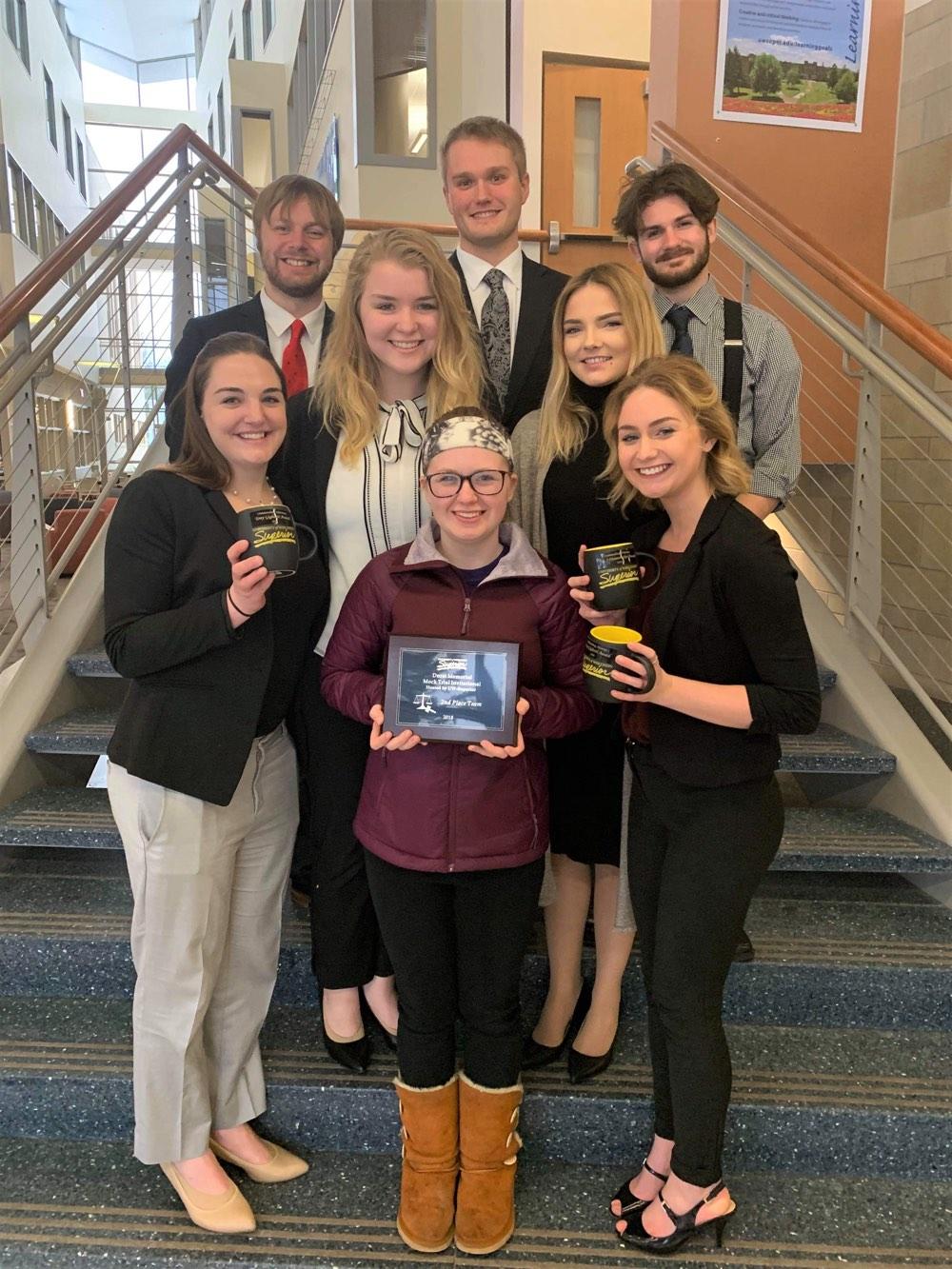 With a record of 7-1, UMD placed second overall in the tournament (and indeed, were three points short of going undefeated and sharing top honors with Macalester). Three student attorneys at the tournament received perfect "No. 1" attorney rankings from every judge they appeared before, and UMD proudly claimed two of them: Audrey Baumgartner and Claire Schmitz. Claire also received a "Best Witness" Award.

In addition to the continued dominance of both Claire and Audrey over the course of the 2018-19 season, we are proud to report that all of our student attorneys and witnesses were regularly receiving top-four witness and attorney rankings throughout the tournament.

This team is having a lot of fun, and we could not be more proud of their hard work. The Saturday night, before the final round, the group held a "Merry Mockmas" holiday and team-building gathering, complete with ugly holiday sweaters and exchange of white elephant gifts. This sort of team fun and cohesion paid off: in the final round, UMD's defense team took both ballots by a single point against a very talented St. Thomas team that, previously, had lost only to undefeated Macalester. 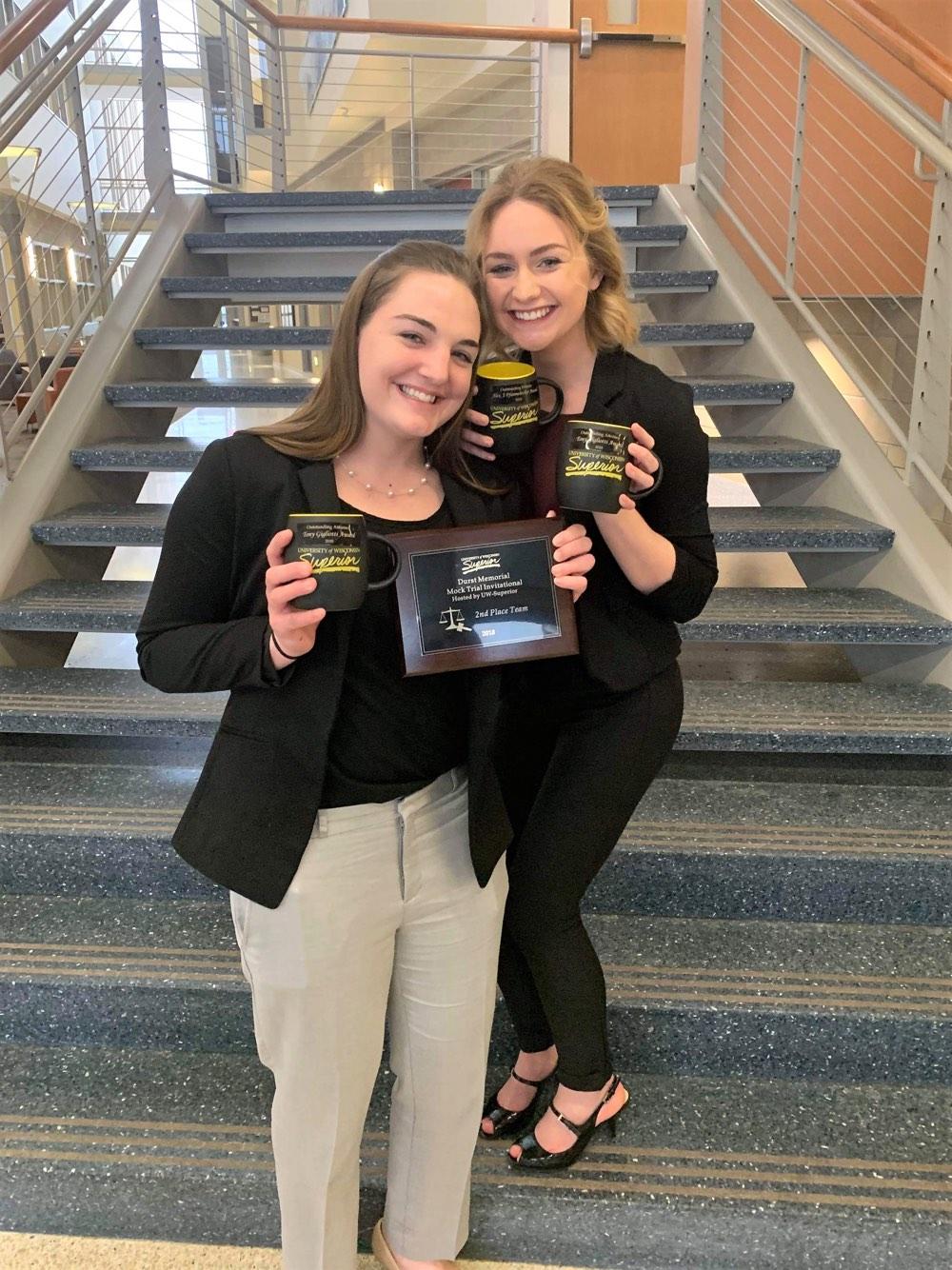 Audrey Baumgartner and Claire Schmitz received perfect "No. 1" attorney rankings from every judge they appeared before.

The team will now enter the holiday break building strategy ahead of regionals next spring. Many thank-you's are in order before the break. Special thanks to Dean Susan Maher for the additional financial support of the team this year, which has given the team the ability to get a comfortable night's sleep, along with a good meal before every round this year, and also to Cindy and Geraldine for their continued support through the resources of the department. Geraldine has been a huge asset to the team on the organization and logistical side - cannot thank you enough!

Associate Professor Joseph Staats, Department of History, Political Science and International Studies, was present to support the team at their final round yesterday. Professor Staats has not only been heavily involved in the past coaching and advising of this team, he continues to play an incredibly important advising role for these students as they explore grad school.

It is exciting to report that team members from both last year and this year are having great success with their law school applications. UMD is regularly graduating students who, 5-10 years from now, we would not want to cross in a court room!

Many more to thank, including the students themselves. (For example, biology student Tom Kramer, who did not accumulate enough rankings for an attorney or witness award at this tournament, has nevertheless been critical to the team's analysis and success working with the AMTA case this year, and he has also been coaching and building UMD's second Home Team - the students who will next year step in to fill big shoes.)