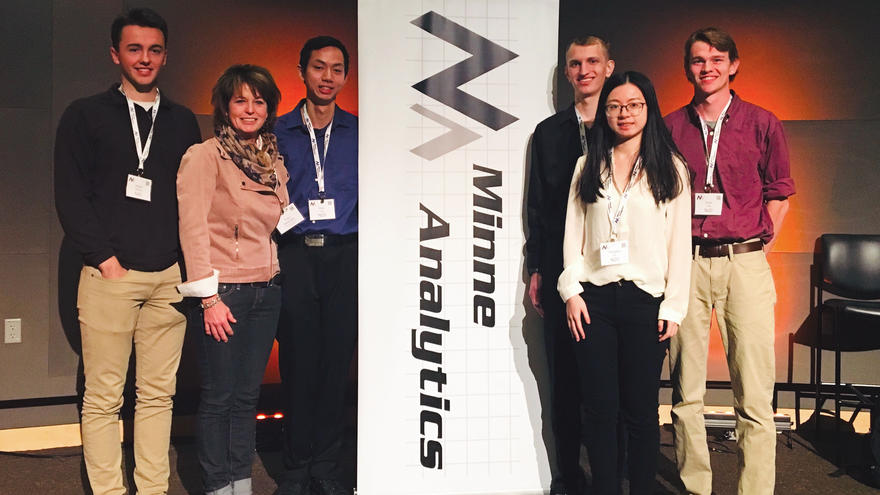 Nine students at UMD competed in the month long MinneMUDAC Data Analytics Challenge. This years challenge was to predict voter turnout in Minnesota’s eight Congressional Districts. The undergrads were charged with predicting overall turnout in each of the eight Districts while the graduate teams were required to predict turnout by party (Democrat, Republican, other) in each of the races.

The teams spend one month collecting data, analyzing data, and building models that provide insight into the challenge question. Teams must work collaboratively on the challenge. At the end of the one month, the team assembles a presentation that explain and tells the data story.

The teams have roughly ten minutes to present a month’s worth of work, insights, and solutions they discovered. Assistant Professor Tracy Bibelnieks started advising teams in Fall 2016 and says “This is not an easy task. Students take what could be a thirty minute presentation and have to distill it down to the significant pieces that explain their solution.”

The undergraduate team consisted of Noah Lahr, Patrick O'Brien, Brian Paulsen, Nhan Tran, Xingjian Ye, Kaylee Anderson, and was advised by Tracy Bibelnieks. The team competed in the Novice undergraduate division. Out of 20 Novice teams, the UMD team took second place and each member walked away with $200 each in prize money.

The graduate team consisted of Aaron Crenshaw, Kim Mandery, Tianyi Zhang, Yingchao Zhou and was advised by Aaron Shepanik. The team placed in the top three of 20 graduate and business professional teams. The final standing in the competition for the team will be determined after the election when their predictions are compared to the actual voter data. It is ensured that the graduate team will also be the recipients of prize money!

Tracy says, “This was one of the most amazing showings for the UMD teams considering that none of the students had ever competed in this type of competition.”

Learn more about UMD's Department of Mathematics and Statistics.