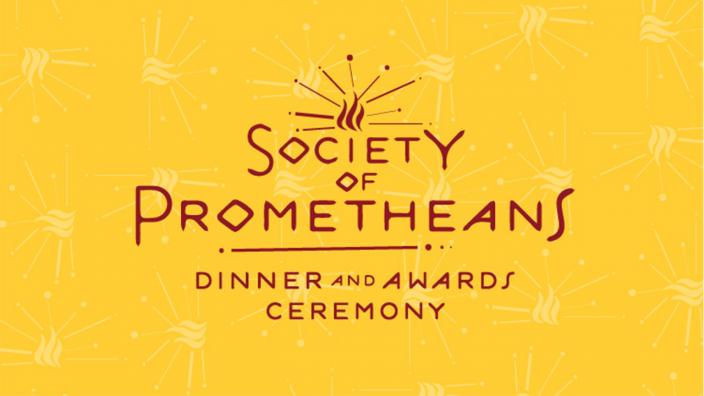 The UMD School of Fine Arts honored six Prometheans in 2017.

The Society of Prometheans celebration honors alumni and those impacting UMD’s School of Fine Arts who have demonstrated the passion, commitment, and talent to achieve excellence in their art and profession and benefactors who have enabled SFA to achieve new levels of excellence in programs. 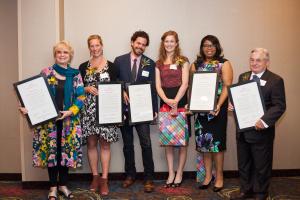 Tweed Museum of Art honored Bruce Hansen: Bruce is the former president of the Tweed Museum of Art Advisory Board and remains as a board member. He is retired teacher with multiple years of experience in the Minnesota Public Schools. Recently, Bruce served on multiple sailing committees.

Jason is a BFA alumnus from UMD. Along with his wife, Jessica, they co-founded Yellow Tree Theatre in Osseo, Minn. Jason serves as founding artistic and executive director while managing the organization. In 2016, he directed A Gone Fishin’ Christmas at the Yellow Tree Theatre.

Jessica is also a BFA alumna from UMD. She co-founded Yellow Tree Theatre in Osseo, Minn. with her husband, Jason, and is currently the associate founding artistic director and director of development. She is an outstanding author of six full-length and two one-act plays. In 2006, her play What I Learned from Grizzly Bears received the Best Ten Minute Plays award at KCACTF.

Department of Music honored Nicole Jordan: Jordan is an alumna from UMD where she received her Bachelors in Music. Currently, she is the principal librarian at Atlanta Symphony Orchestra. She is also an active member in the Major Orchestra Librarian’s Association (MOLA) and holds the sub-committee chair position.

Department of Art & Design honored Diane Fay Skomars: Diane earned her B.A in Speech from UMD. She is the author of the book Have I Taught You Everything I Know?, inspired by a conversation she had with her daughter on 9/11 while living in New York at the time. She has held multiple leadership roles in universities, including director of Alumni Relations and director of Student Activities Center. She received numerous awards honoring her outstanding efforts and contributions in these positions.

Fine Arts Academy honored Emily Vikre: Emily is the co-founder and president of the Vikre Distillery in Duluth, Minn. This year she received the “Labovitz Award for Entrepreneurial Success” and last year the distillery was voted by USA Today as the “Best Specialty Spirits Distillery in the U.S”. Emily has accomplished much in the area of improving nutrition in the community.