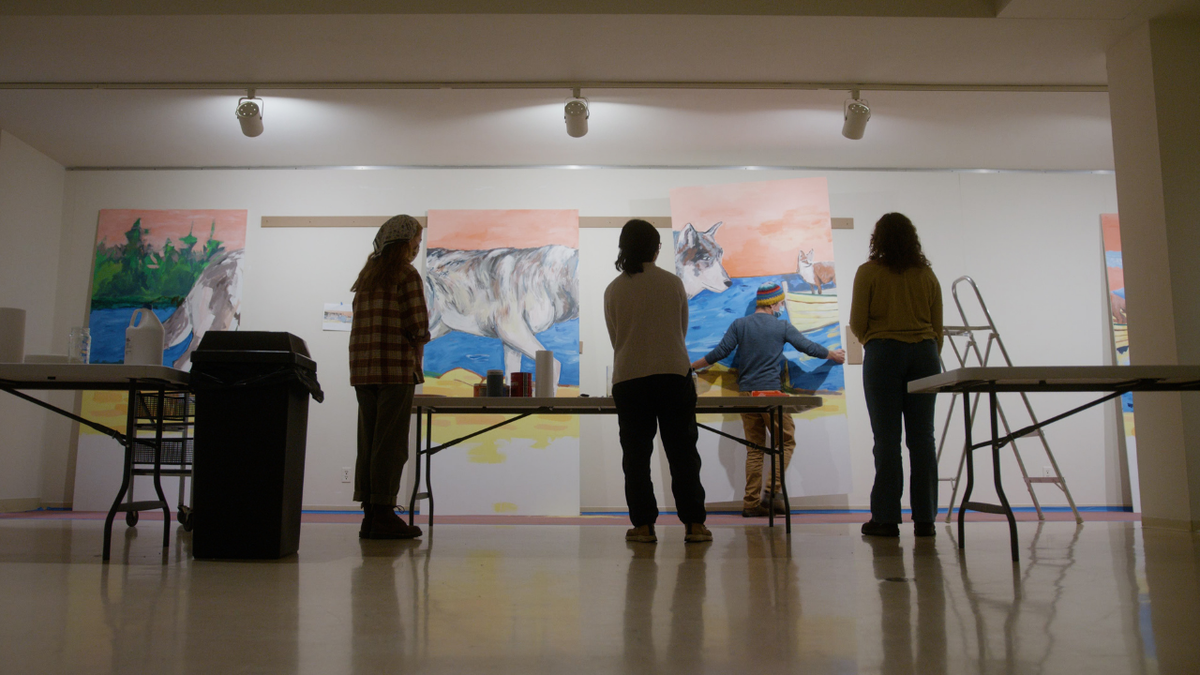 A new campus mural is the end product of a targeted invitation to create.

Double majoring in Art and Biology is an unusual combination, but senior Jessica Ross’ passion for both subjects can be traced to growing up on a farm in Fisher, Minnesota. 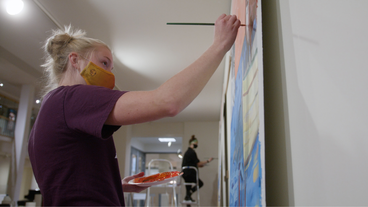 There, her grandpa led Jessica on walks that doubled as lessons about the nature they were seeing. And at the kitchen table her mom, a former artist, would paint with her.

Jessica’s art and science overlap is unique, but it’s also the exact combination featured in the work of Adam Swanson, who just happens to be one of her favorite artists. The natural world inspires his art, and he previously worked as a marine technician supporting National Science Foundation research. 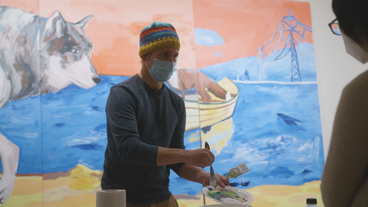 Tweed staff Camille Doran, registrar, and Missy King, executive office and administrative specialist, thought of Swanson when developing a collaborative project with a local artist. “I knew Adam could easily mentor students, particularly ones who may not be as involved in visual arts,” says Doran.

This was the overarching goal– to involve students with little exposure to visual arts. They purposely included science students in their outreach.

Painting began last week, but Swanson kicked off the design process in the spring. Because of the pandemic, most of the collaboration was done via Zoom.

“The second component, the painting of the mural, raised concerns about how to accomplish it during the pandemic,” explains Doran. They worked with UMD’s Environmental Health and Safety office to develop protocols, like spacing the panels apart and limiting the number of students to four at a time. 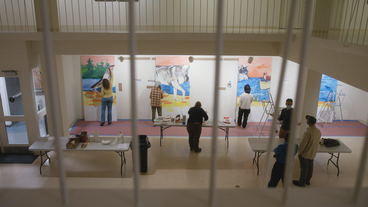 But the timing also makes the mural more meaningful. “These projects are more precious during COVID-19; we have so few opportunities to be together,” says Swanson.

Watching him work with students, Swanson’s efforts to empower their creativity is evident. “Go ahead and put a plant here,” he encourages participants, illustrating how they can stray from the original blueprint of the mural, which depicts a fox and wolf on the water. The electrical tower in the background symbolizes the relationship between humans and the natural world.

Participant Ross relishes the opportunity to paint with Swanson and other students, and as she works, she shares plans to continue to share her love of art.

While in high school, the Fisher School District discontinued Ross’ arts curriculum. Ross worked hard to successfully get the program reincorporated. As she nears the midpoint of her senior year, while relishing the research that comes with her Biology major, Ross is considering working with small towns and the arts after graduation. “It’s so important that everyone has access to creative activity.”

This evidence-based logic is apparent in the Tweed mural, which is on display through next summer in Tweed's contemporary artist gallery on the main level. After that, Doran says it will be available to any units on campus that are interested in displaying it.

Watch as Adam Swanson and Bulldogs create their mural at the Tweed, and hear why they're participating