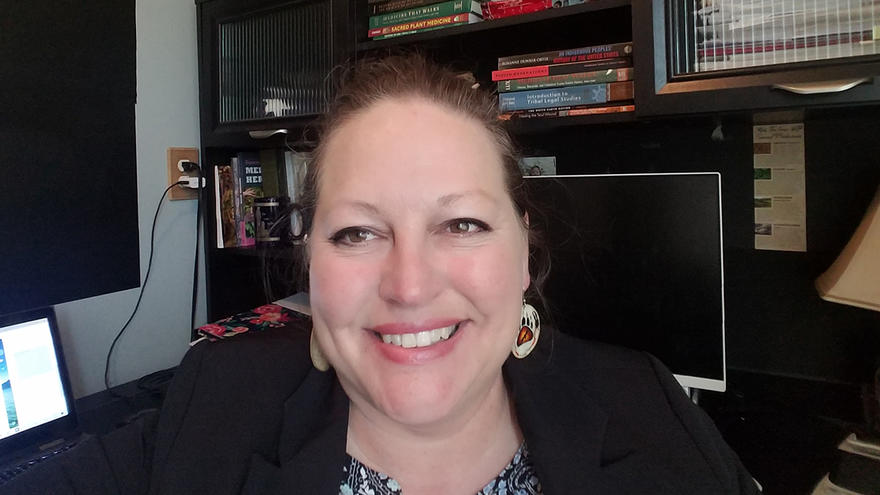 The UMD Center for Regional and Tribal Child Welfare Studies (CRTCWS) is leading a new initiative to educate and train all child welfare workers in Minnesota to provide culturally responsive services to American Indian families.

Jeri Jasken was just hired to direct the Aabinoojiiyag-Wakhanheza Un Thantanhanpi – For all the Children - Sacred Being: Tribal Training and Certification Partnership (TTCP). An enrolled tribal member of the White Earth Nation, Jasken brings more than 24 years of personal and professional experience to this role.

“We are looking forward to Jeri bringing her skills and passion to the new venture!” says Bree Bussey, director of the CRTCWS. “She has been a tireless advocate for effective ICWA implementation and compliance and is sought out by tribes across Minnesota and beyond for her technical assistance.”

Over the last decade, Jasken has been honored by the United States Children’s Bureau for her work in child welfare. She has led programs that received the Minnesota Department of Human Services Commissioner’s Circle of Excellence Award, both for tribal child welfare programming and for holistic treatment programming for pregnant women. She was also honored with a distinguished leadership award for her work in advancing addiction treatment by the Minnesota Association of Resources for Recovery and Chemical Health.

Under Jasken’s leadership, White Earth became one of two American Indian Child Welfare Initiative tribes in Minnesota, taking exclusive jurisdiction of its own tribal child welfare programs. This led to improved outcomes including increased family preservation, a reduction in out of home placements, and improved wellbeing indicators for families. She has expertise in direct practice and organizational management as well as policy development and implementation.

The CRTCWS, based in UMD’s Department of Social Work, is recognized as a leader in the state and nationally for its comprehensive and culturally responsive approach to training child welfare workers to work with American Indian families.

The center’s collaborative method engages tribal leaders and government entities. Its overarching goal is to prevent out-of-home placement of American Indian children by enhancing social work practice. Currently, Native children in Minnesota are placed in foster care at a rate that is 18 times that of their white peers.

All Minnesota child welfare workers and their supervisors will be mandated to attend a two-day training conducted by TTCP, which is being developed in partnership with the state’s tribal leaders. The training aims to advance knowledge of tribal systems and compliance with the Indian Child Welfare Act to reduce disparities that exist statewide.

The TTCP was created through a joint powers agreement between the CRTCWS Department of Human Services and the University of Minnesota Twin Cities Child Welfare Training Academy. The partnership is working on a legislative proposal to secure sustainable funding from the state.

Learn more about the Aabinoojiiyag-Wakhanheza Un Thantanhanpi – For all the Children - Sacred Being: Tribal Training and Certification Partnership.