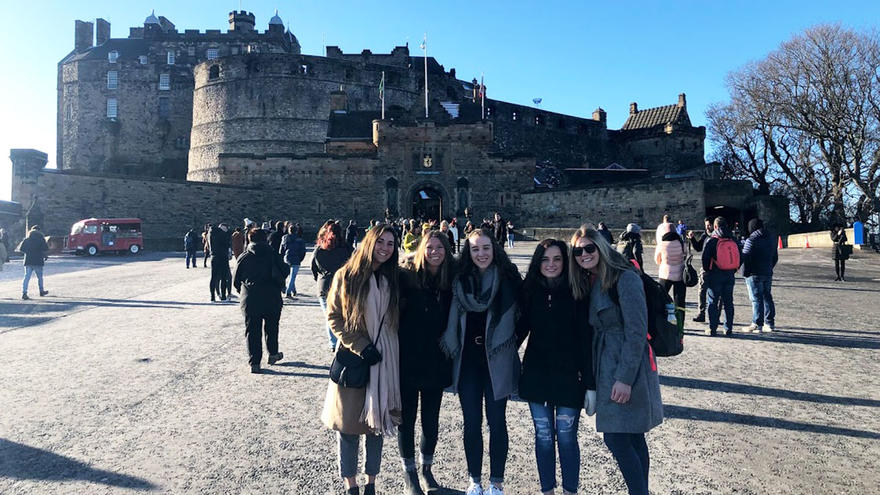 Marketing major Courtney Cornelius studied in Scotland and traveled to nine other countries.

According to the Study Abroad Open Doors Report for UMD, 265 UMD students studied abroad during the 2018-19 academic year. Of those 265 students, 18 went to the United Kingdom. Courtney Cornelius was one of those students.

Cornelius is a junior, majoring in marketing with a minor in sustainable business. She is very involved in campus life. She is the business manager for The Bark, part of Phi Sigma Sigma, is the marketing chair for SERVE, she’s in Colleges Against Cancer, and is now part of the Study Abroad Board.

Cornelius went to Scotland for a semester-long study abroad program with her best friend, Kamille Ditommaso. She chose Stirling, Scotland, because, “My heritage is Scottish, and it seemed similar to Duluth with its outdoor/city combination.”

She took an ethics class with a focus on the U.K. for her major/minor, and a U.S. history class where she learned new things about United States history. She was able to learn about events like slavery from a perspective outside of the U.S.

Studying abroad isn’t all about studying. Cornelius said that, “You get to travel a lot while you’re there. Of the places we visited, my favorite place was Greece.” She also visited Sweden, Norway, Iceland, Netherlands, England, Ireland, Spain, and Italy.

When she got to Scotland, she made strong friendships with other study abroad students because they had to ‘adapt together.’

The hardest part of being in another country for Cornelius was the accent and the lingo spoken. She learned that, “it’s not a trash can, it’s a rubbish bin.” Plus, the school system was different because “they provided less busy work. Also, we had a lecture once a week and then discussion once a week. Coursework consists of a paper and a final exam,” she said about the school.

There are many Study Abroad options offered through UMD, and there are many opportunities to learn how to get involved. Students can talk to a peer advisor in the Study Abroad office, take the Study Abroad 101 session (held on Tuesdays and Wednesdays at noon), drop by the advising session (open office hours are 10-11 a.m.), or just type "study abroad" into the search bar of the UMD website and browse through the options.

Study Abroad is a great way for students to grow their perspective and meet some cool new people!