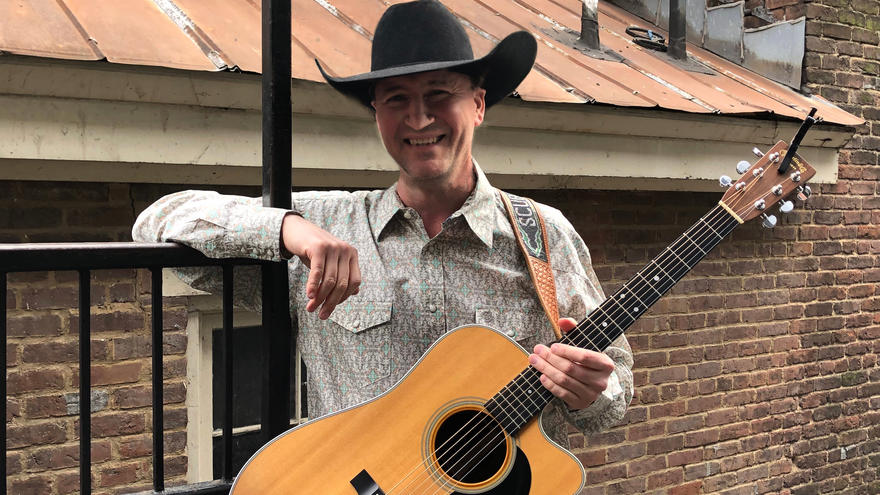 Steve Turner wears a big black cowboy hat and a cowboy shirt and plays music that urges the people in the crowd to action. They jump up from their seats to dance and often belt out the chorus lyrics.

“Where you all from?”  he asks a group of recent arrivals. “Wisconsin,” they holler back.

“Heck no,” was the group refrain.

“I’ve got you,” Steve shouts his reply with a smile and the group shouts back in agreement. 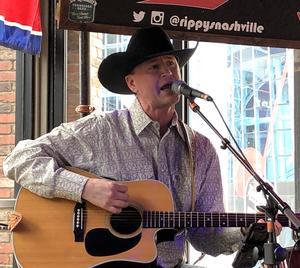 At Rippy's in downtown Nashville

His easy way with the crowd brings them up to the stage between songs to make requests or just to chat. Steve delivers a clean, intense classic sound, a mix, country and rock. He performs for hours, mostly songs with a strong beat and stronger vocals. The crowd loves him.

He’s in Nashville now, working as a pharmacist full time and playing music on his days off. It’s been a long flight from his childhood home of tiny Naytahwaush, in Mahnomen County, Minn., near White Earth. Steve is an enrolled member of the White Earth Band of Ojibwe, “Born and raised,” he says.

“Honestly, my first college scholarship check from White Earth was big. I took it to mean my tribe was investing in me. I wanted to honor that investment by finding a career to make things better for Native people.”

It took him a while to take off in the right direction. First, he got an undergraduate degree in management from UM-Morris. After working at the Shooting Star Casino in Mahnomen during his college years, his degree took him first to an insurance company, then eventually the Native American Business Development Center with the Minnesota Chippewa Tribe. It was his next job at the Cass Lake Indian Health Service, where everything changed.

Steve worked in medical records, but there was something missing, especially compared to the Cass Lake people in the next office, the pharmacy department. He watched his colleagues work. “They were an absolute beehive of activity,” Steve says. The pharmacists were busy with customers and medications, and there was a special “whistle-while-you-work” quality to their interactions. “They laughed and swarmed around like hummingbirds. They had a pattern I wanted to know.”

As Steve learned more about their work, he made a big decision. He went back to school.

He took pre-pharmacy courses in Bemidji, and with the prerequisites under his belt, it was off to UMD for the pharmacy degree. “Taking those courses in medicine took every ounce of energy I could muster,” Steve says. “It was tough.” Everything, even music took a back seat.

At UMD, he was part of multicultural pharmacy student organization. It was through a pharmacy school professor that Steve met Rick Smith, the director of the American Indian Learning Resource Center, who became a special mentor. "Rick knew of my passion for music," Steve says. "He provided me a unique opportunity to share my gift of performance with groups studying with the Blandin Reservation Community Leadership Program."

Long days and many nights of studying brought graduation. His first job was with the Fond du Lac Reservation at both the Min-No-Aya-Win clinic in Cloquet and the Center for American Indian Resources clinic in Duluth. Steve eventually made the move out of Minnesota to work as a pharmacist at the Cherokee Indian Hospital in Cherokee, North Carolina. Cherokee had an added benefit. It was less than a five-hour drive to Nashville.

With professional job as a pharmacist in hand, Steve eventually felt settled enough to turn back to music. For Steve, that passion began as a young boy. His earliest memories were of his father playing guitar and singing to him, his brother, and his sister.

When his father, an Episcopal minister, moved the family to attend seminary in Evanston, Ill., the move gave Steve a taste of the big city. He went to events like the Nutcracker Ballet and sang in a boys choir.

Steve gives credit for his love of music to many. During his years working in the business world, Steve showed up with friends for a branding at the Ducheneaux family ranch on the Cheyenne River Sioux Reservation in western South Dakota. The party went on all night with Steve joining in on vocals and guitar. That’s where Steve discovered his second family. It's also where he found his voice and his style. He never looked back.

“The Ducheneaux’s pushed me to shoot for higher things,” Steve says. “They supported and encouraged me.” Over the years, the many all-night jam sessions on the Ducheneaux Ranch brought a greatly expanded vocal range and book of songs. “Their voices will always be there, like my dad’s voice; they’re part of me.”

One adventure followed the next. In 2012, singing karaoke on a lark, Steve won local, regionals, and the grand finale, besting 9,000 singers in all, and ultimately landing a spot at WE Fest, called the largest country music festival in the United States. He showed up at the three-day gig in Detroit Lakes, Minn., where he opened for Keith Urban.

The biggest leap Steve has taken to date was giving notice at his job in North Carolina and renting an apartment in Nashville. He made trips back and forth, playing music in clubs near the Ryman Auditorium and interviewing for pharmacy jobs. Two weeks before his final move, he got a call on his cell phone. He saw the area code for Nashville and answered right away. The call turned out to be the job he was hoping for. He was hired as a pharmacist at the Veteran’s Administration Hospital in Nashville.

Nashville brought a bigger music scene. In 2017, he played on Broadway at a coveted stage, Tootsie’s World Famous Orchid Lounge, during a coveted time, CMA Fest. That was the year he released Troubadour Dream, an EP available on several digital music outlets including Apple Music. It features two of his original compositions, "Waiting on Sundown," and "A Troubadour’s Dream".

But he can’t deny it. Music is his first love. “I get a thrill every time I walk down Broadway in Nashville. Every stage has incredible musicians. It’s majestic.”

About the University of Minnesota College of Pharmacy - Duluth Campus