More Than a Job 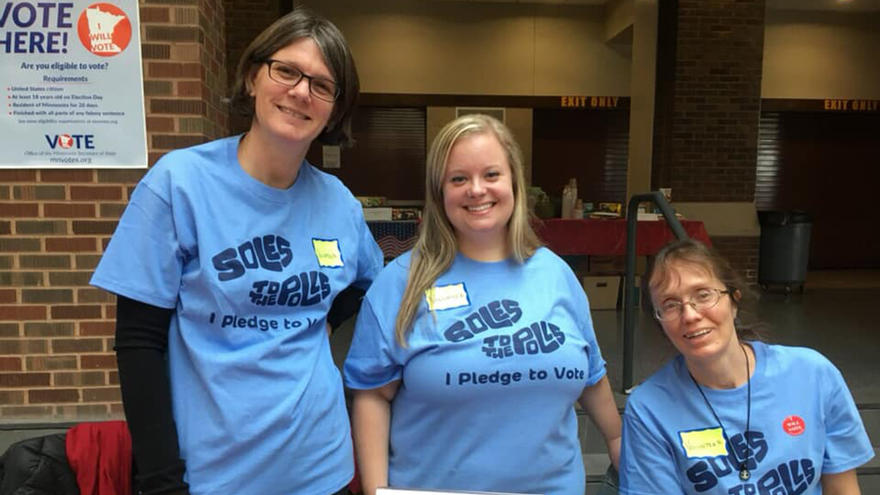 When Sandra van den Bosse gets "ticked off" about injustice, she stands up and takes action.

"It's a natural thing that I have always done," she says, matter-of-factly. The instructor in the UMD Department of Social Work's keen sense of right and wrong was instilled in the Netherlands, where she grew up. She was first compelled to demonstrate while in high school there against injustices like apartheid and the war in the former Yugoslavia.

Protests evolved into organizing and a career with stints at the United Nations and other nongovernmental organizations working on issues related to peace and human rights. When van den Bosse first moved to the United States, she worked on domestic violence issues. She helped develop national-level trainings and later co-facilitated groups with perpetrators of abuse.

Van den Bosse started teaching in the Department of Social Work in 2012 and now directs the Bachelor of Social Work (BSW) program. She expects her students to live their values and points out that social work is more of a philosophy than an occupation. "You are expected not just to do it as your job; it's a part of your being," she says.

The BSW program started in 2014. Last year it doubled its enrollment. The program distinguishes itself in its focus on working with American Indian populations and emphasis on cultural responsiveness. "It used to be cultural competence but we changed it cultural responsiveness," van den Bosse says. "Competence implies an end date to the learning, which we don't think accurately represents the goal and learning process."

A core piece of the BSW curriculum, guided by the Council on Social Work Education, is for students to learn to "Advance human rights and social, economic, and environmental justice." In the course of completing their degrees, BSW students learn about this in class and complete 420 hours of field work at organizations where these lessons are incorporated into practice.

The commission works on a variety of issues. It has held listening sessions where Duluth citizens can voice concerns and was part of the "Soles to the Polls" effort to get people to vote.

It has been tackling some bigger projects too, such as helping to establish a warming shelter for people experiencing homelessness and helping to create a policy to guide the Duluth Police Department's use of crowd control protective gear. Van den Bosse notes the latter has been quite a process. It involved many community meetings with groups that have different opinions and input from local branches of organizations such as the NAACP and Showing Up for Racial Justice (SURJ).

The policy will be presented to the community in January. If adopted by the police department, it would be one of the most progressive policies in the country on the use of crowd control protective gear, according to van den Bosse.

This volunteer work informs van den Bosse's teaching. "I talk to my students about the work I do. Like how to run meetings with groups and how hard it can be when you have people who are different and don't agree on much," she says. "They like to hear about recent practical experiences."

She points out that there are near endless opportunities for students and regular citizens to make a difference through involvement in city commissions, unions, and nonprofits.

"I want students to be involved. I think it's important," says van den Bosse. "I think everyone should do volunteer work. It's our obligation to society."

The Department of Social Work is part of the College of Education and Human Service Professions. This article was inspired by Human Rights Day, which is celebrated on December 10. It commemorates the day in 1948 when the United Nations General Assembly adopted the Universal Declaration of Human Rights, which outlined a set of fundamental human rights for the world.