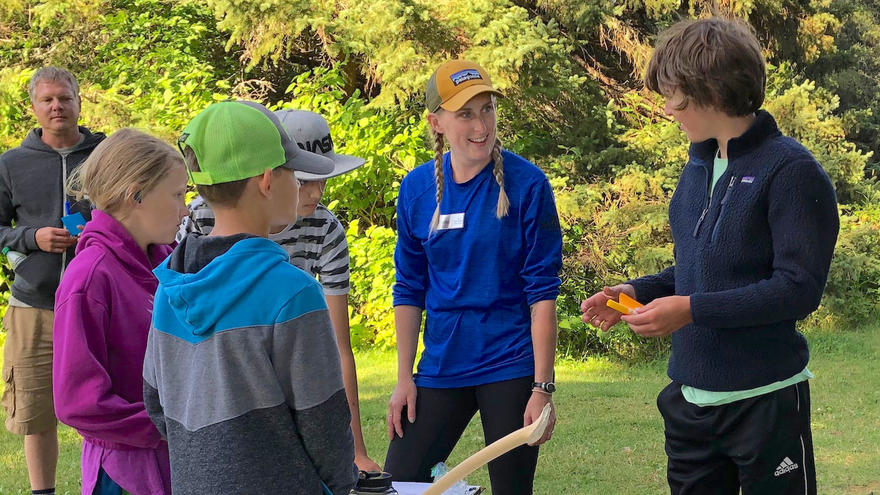 They race around a field in Grand Portage National Monument, tagging one another and then dropping to the ground. Ten kids and six parents play the game. Trisha Bartels, a key partner collaborating on the Voyage of Discovery, calls out the moves. The game, Predator and Prey, where each individual becomes either a wolf or a deer, is based on the process of elimination. After each round, the children sit in a circle, smiling, laughing, and recapping their moves. At the end of the game, students discuss influences on the ecosystem when certain species were eliminated before others.

The game is one of the activities in Voyage of Discovery, a new program developed by the National Park Service, Minnesota Sea Grant, and the Grand Portage Band of Lake Superior Chippewa. The Great Lakes Restoration Initiative funded the new program through the U.S. Environmental Protection Agency. In addition to the activities in Grand Portage, like the one above facilitated by Trisha, the groups traveled to Isle Royale National Park on the Seahunter III ferry to receive additional educational programming. This summer, 2019, the program offered three, free, overnight camp experiences for 9-12-year-olds and their adult mentors. The group who played the Predator and Prey game was only a portion of the 40 people who attended the last of the events in late August 2019. 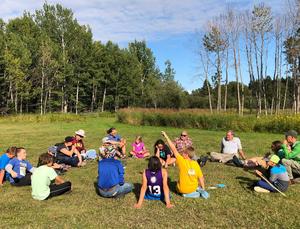 A group of children, parents, and leaders play a game about animal habitat.

The activities make up part of her Master’s thesis for her environmental education degree. In addition to the Predator and Prey game, Voyage of Discovery collaborators included a lesson held on the Grand Portage dock about the geology of Lake Superior. A Remotely Operated Vehicle (ROV), which is similar to an underwater drone, was in high demand. The children and adults took turns operating it on the lake floor to see the different kinds of Lake Superior rocks. 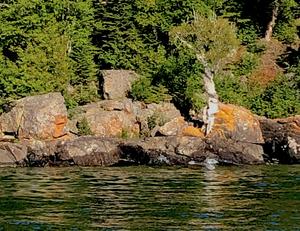 The group also learned about the ash borer threat to black ash trees. As the black ash trees die, they won't be able to absorb excess water, causing forested wetlands to flood, riparian corridors to shrink, and ultimately causing harm to wild rice beds. Grand Portage National Monument and the Grand Portage and Fond Du Lac of Lake Superior Chippewa are preparing for the future by restoring tamarack, yellow birch, white cedar and other species to floodplains and forested wetland edges in the hopes that at least a part of the niche occupied by black ash can be filled by these native species and others plantings. The final evening activity was a fireside chat about Ojibwe culture and the history of the Grand Portage Band of Lake Superior Chippewa.

Life turned around for Trisha in 2017. After getting a BFA degree in communication design from Milwaukee Institute of Art & Design, she worked in graphic design jobs in Madison, Wis. and Eugene, Ore. “I felt like I was missing something,” she says. Life took an exciting turn when, on a whim, she left everything and moved to Running Springs, Calif. to teach Outdoor Education at Pali Institute of Outdoor Education. “For the first time, my job didn’t seem like a job. I loved teaching outside.”

Trisha had found a new thrill, environmental education. That realization led her on a hunt for a master’s program where she found Ken Gilbertson at UMD and the MEEd Degree (Masters of Environmental Education). “Ken said I didn’t have to follow a rigid plan. He encouraged me to design my own program so others could learn from me. I was sold.”

Two years later, Trisha is newly married to Sam Bartels, who shares her love of the outdoors. She’s also putting the finishing touches on her Master's thesis "Creating Connection to Nature: A Curriculum Project Combining Interpretation with Adventure Education." This thesis is based around the sites of Grand Portage National Monument and Isle Royale National Park. "The thesis will be used as inspiration for the Voyage of Discovery Program as they continue to develop this program," Trisha says.

“Sea Grant is proud of the program, and they are going to try and do it again next year,” Trisha says. "Sea Grant's hope is to offer more people the opportunity. I think we all recognize this is something very, very, special.”

At the last August Voyage of Discovery session, the fireside chat was in many minds as the camp quieted down. Almost everyone was in their tent. Nedda Raine, one of the older girls on the camping trip, hadn’t fallen asleep yet. Only a few of the grown-ups were around the fire. The waves were lapping against the shore a few feet from the tents. The wind ruffled the leaves of the birches. Then, the sound of rhythmic drumming came across the field. The steady deep beat, almost like a heart beat, thumped. A voice joined in, singing high notes at first and then the song notes deepened into lower tones. The next morning, as campers talked about the song, no one knew where the music was coming from. Some thought it came from the nearby visitors center, others guessed the Grand Portage Pow Wow Grounds.

“I heard the drumming and singing and I thought it was peaceful and calming. It was so tranquil that it helped me fall asleep,” says Nedda, who has American Indian heritage. She and her two sisters were among the 40 adults and children who came that weekend. “I don’t think it was a song that traditional groups play at pow wows. It was probably a newly created piece, but I am not entirely sure.”

In the morning, the group boarded the Seahunter III ferry for Isle Royale National Park. The captain brought the boat in close to shore the see the 300 year-old Little Spirit Cedar Tree. “The Spirit Tree is personally a blessing to see because I know how important the tree was to my ancestors,” says Nedda. “It felt very spiritual and I thought it was fascinating and beautiful. Also, how cool is it that a tree could grow out of pure rock!”

Trisha believes that environmental education is life changing. "Experiential learning is a more effective way to teach, as it helps connect the mind and body to learners through sensory experiences," she says. She implements these concepts within her thesis. "I hope others will it use my work to expand their own agencies with the curriculum."

About the UMD Master of Environmental Education

Photo above: Trisha Bartels shares a story with campers.