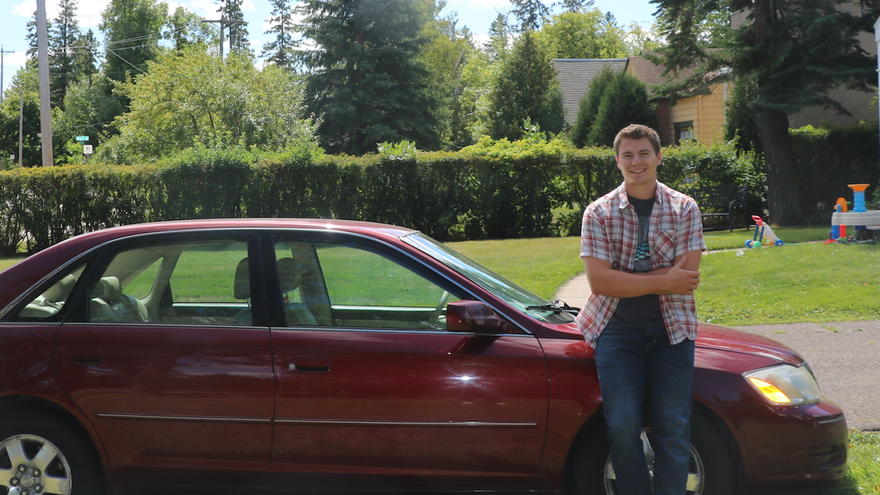 Finance student Ryan Klosterman takes his skills outside of the classroom.

Vibrations shake on the highest setting from an Apple watch. It’s strong enough to wake even a heavy sleeper. It's a summer night, and Ryan Klosterman is in his hometown, Cold Spring, Minn. It's active bar time. He grabs the keys to his 2000 Toyota Avalon and heads to his car. He is about to pick up his first rider of the night. This is Ryan’s Sober Cab business. 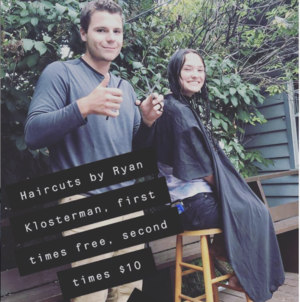 Ryan and a Tappa Cuts client

A finance major in the UMD Labovitz School of Business and Economics, Ryan possesses an entrepreneurial spirit. He has started two businesses this year, the Sober Cab in Cold Springs and a haircut business in Duluth.  He is taking every business principle he learns and applying it to his businesses. “The people at LSBE, and the faculty, and staff there really do a good job of making sure their students understand basic economics,” says Ryan.

When the summer started, Ryan went around and handed flyers out to the active bars in his town. “They were all pretty excited. If there was a problem, they’d call me,” says Ryan. His flat rate was $20. “That is what I felt was worth it for me to get out of bed."

In a community that needed more safe transportation, Ryan created a successful business. He had a steady clientele. He had an average of four riders call each weekend and would also receive reservations from people for the weekend ahead. “When there is that much demand and you are the only one doing it, economically it made sense,” Ryan explained.

According to the Minnesota Office of Traffic Safety, 72 people died from DWI related accidents in 2018. Starting the Sober Cab business “was beneficial to me because I felt like I was doing something. I have family members that were injured in accidents.” Ryan’s aunt actually died in a car accident. The Sober Cab business was about more than economics, it was about his care for others. “It was definitely a heart thing,” says Ryan.

The hair cutting business in Duluth, Tappa Cuts, came next for Ryan. Ryan’s business plan is to give the client’s first haircut at no charge. After that, he charges a fixed rate of $10 for life. Ryan’s motto for this business is, “It will grow back.”

Ryan’s ability to start these businesses was not just about the numbers. “Making logical decisions based not only on money,” was important to Ryan. His biggest concern was, “What my goals are in life,” Ryan says.

Ryan utilized the tools provided to him within the LSBE department and made something of it. Through determination and thinking beyond the classroom, he was able to make a difference that positively impacted not only himself, but two different communities. That is the spirit in entrepreneurial spirit.

This story was written by Rikkia Walker, a student majoring in journalism. Rikkia works in the University Marketing and Public Relations office at UMD.