Bulldog at the Helm 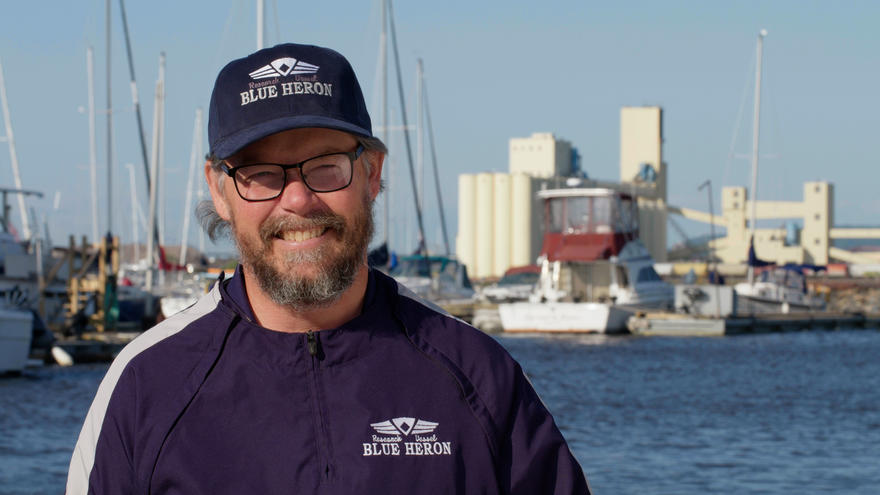 The conditions couldn’t have been more favorable for the 12-hour job… until they weren't.

It was April, and scientists and crew members aboard the Blue Heron, UMD’s research vessel, were putting a mammoth mooring system into the western arm of Lake Superior. “Everything went perfectly. The crew worked like a Swiss watch out there,” remembers Blue Heron Captain Rual Lee.

But spring on Lake Superior can be volatile, and that volatility took hold as the Blue Heron turned towards Duluth for the 11-hour trip back to shore. “The wind switched, and it got worse. We ended up in a snowstorm– a gale with waves coming behind us,” says Lee. Autopilot does most of the boat’s steering, but the waves got so bad they started overpowering the system and Lee was forced to hand steer successfully back to shore. 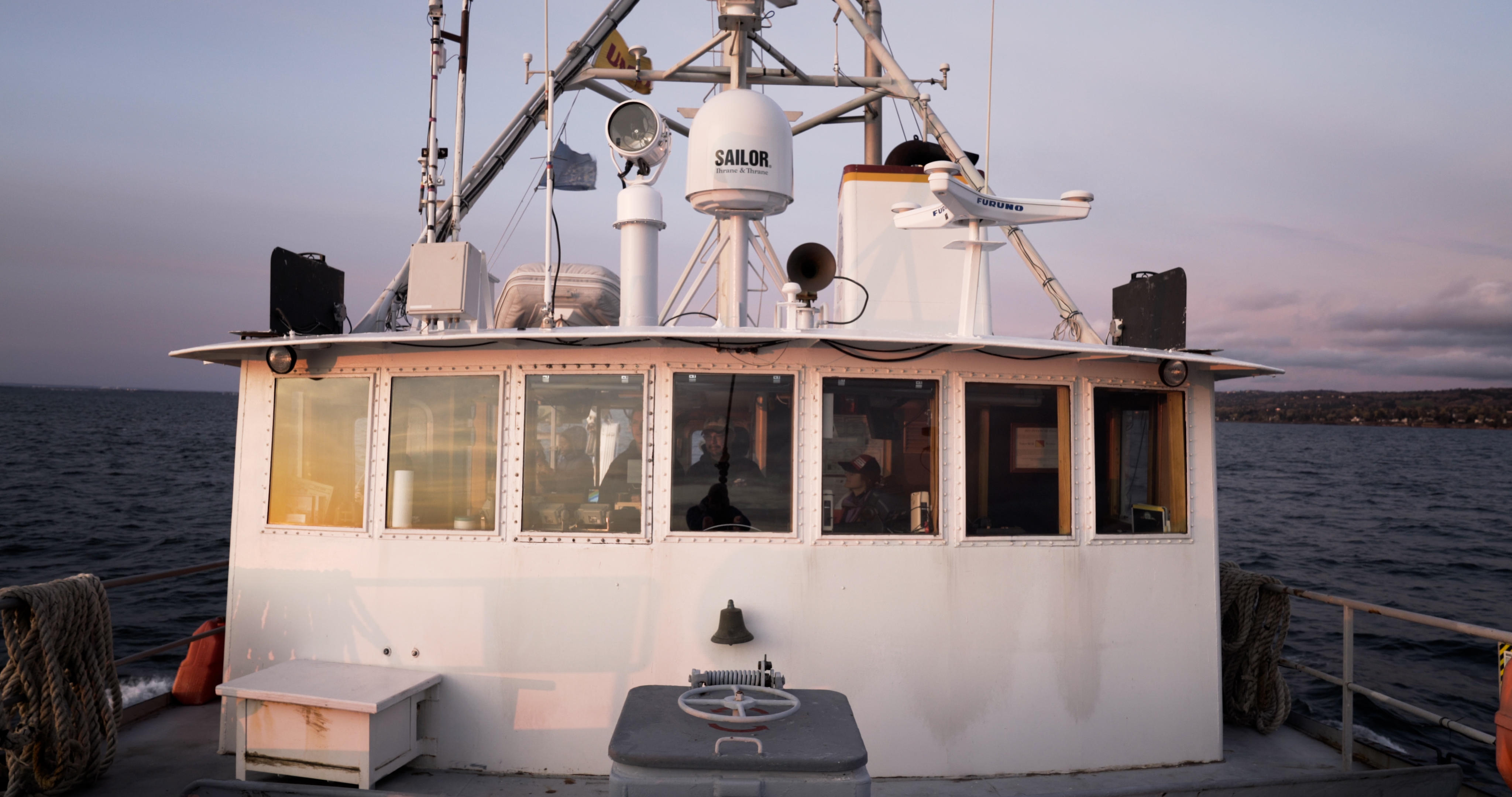 Growing up in Duluth, on sailboats and docks around Lake Superior, gave Lee the mental muscle needed to captain through the storm. And as 1986 UMD grad, he has the added passion for the research that happens on his cruises.

Lee enrolled at UMD pre-Blue Heron, majoring in history and political science. The Large Lakes Observatory, where he would later work, wouldn’t be formed for several years, but a formation of a different type took place. “Going to UMD becomes part of who you are. It affects the way you look at things and how you see the world.”

After graduating, he worked with marine safety gear and in commercial diving. When the Large Lakes Observatory was looking for a captain for the predecessor to the Blue Heron, the Noodin, Lee was hired. 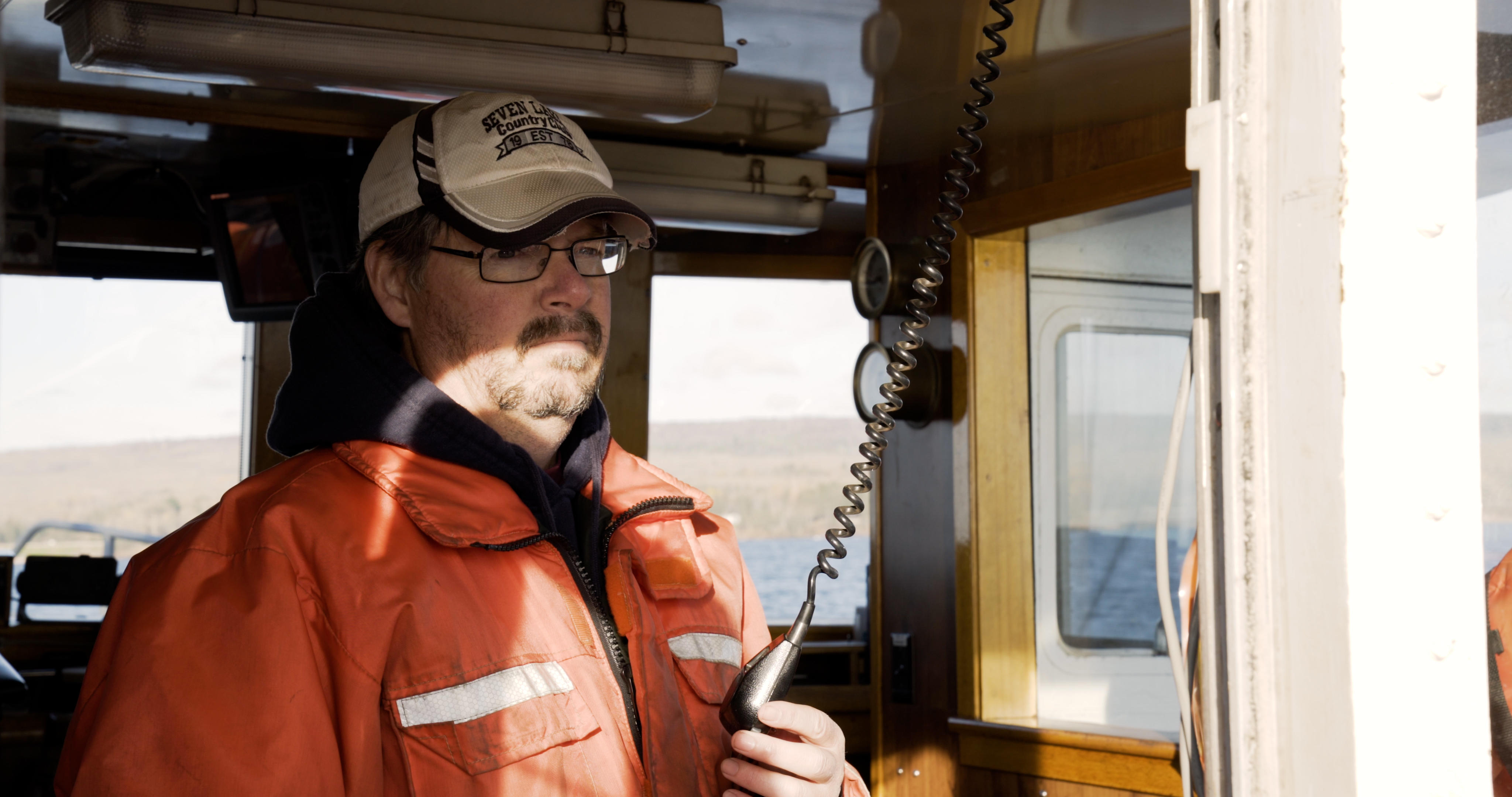 "The Best Part of the Job"

These days, excursions on the Blue Heron can last up to three weeks. In fact, a 2011 cruise brought them from Duluth, through Lake Heron, and into Lake Erie. This extended time gives Lee and his crew plenty of time to get to know the research and the researchers that are aboard. “That’s one of the best parts of the job– to be able to hang around really smart people doing really interesting research.”

Screens are set up in the Blue Heron’s galley kitchen where the crew and scientists talk about what they’re finding over dinner. Lee’s an optimal partner who makes sure that researchers are able to maximize their time on the Great Lakes, collaborating with chief scientists to find out what can be done in what order, depending on the weather.

And scientists can only use the equipment that they have with them, so the crew members are master improvisers… like the time researchers were coring, taking samples off the floor of Lake Superior with a giant straw-like tool, and the core catcher went missing, so they riveted together two pop cans.

“It’s our mission- science support," Lee summarizes. It's a simple explanation for a role that Lee's taken to new depths in the name of impactful research. 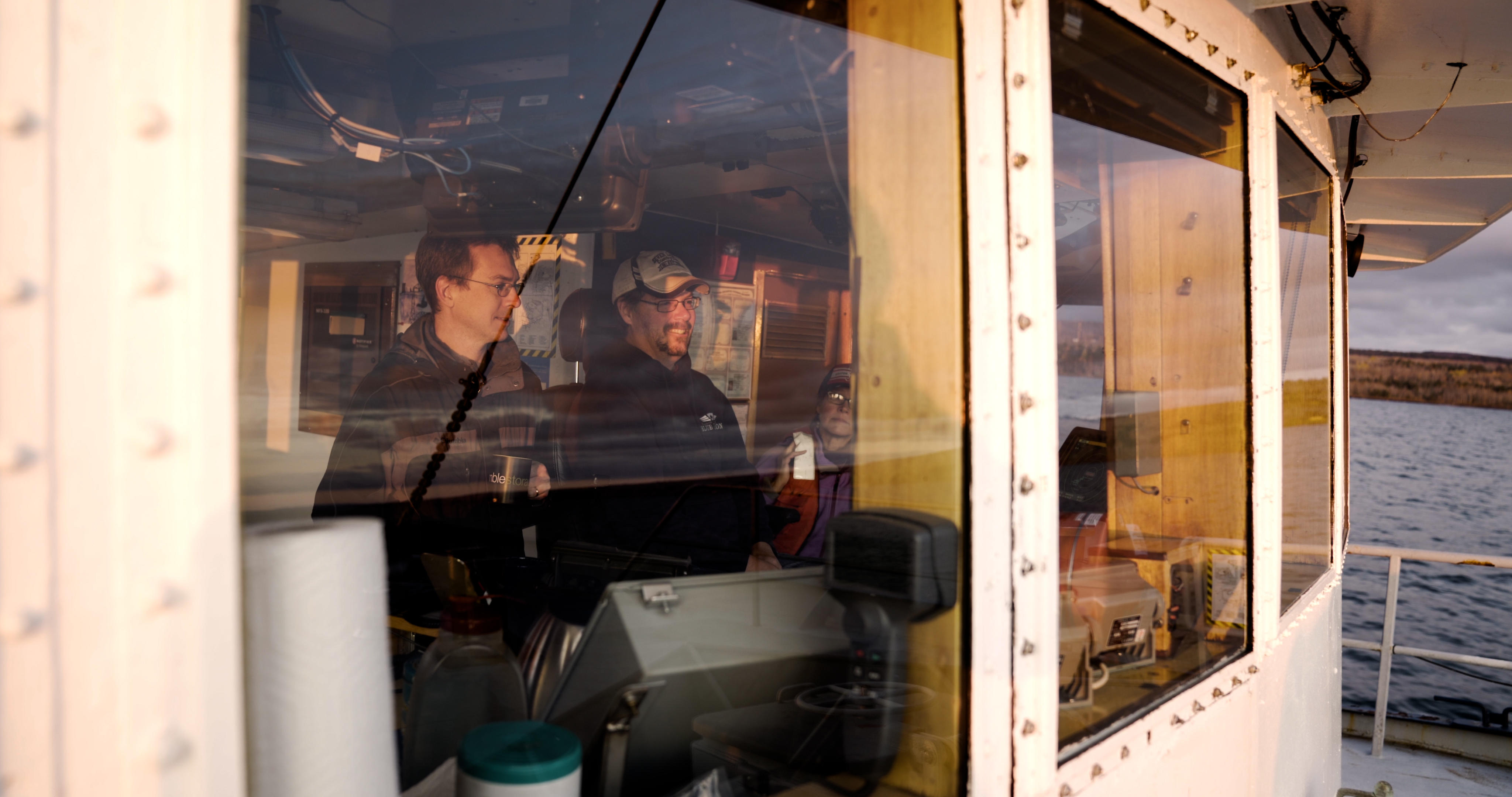 Large Lakes Observatory Timeline
The move to create a UMD center to study Lake Superior began with a "Lake Superior Water Policy Conference" in 1988. With impetus from the conference attendees, chemistry professor and visionary Robert Carlson led the effort to establish an "Institute for Lake Superior Research." In 1994, with financing secured, Professor Tom Johnson was recruited to lead the unit. The name was changed to "Large Lakes Observatory" and its mission was broadened to its current global scope.

The purchase of a research vessel in 1997 was the most significant early advancement. In her previous life, the RV Blue Heron was a commercial fishing trawler that fished the Grand Banks in the northwest Atlantic. Johnson and an LLO crew sailed it from Portland, Maine, through the St. Lawrence Seaway and across the Great Lakes to Duluth. During the winter of 1997/1998, the Blue Heron was outfitted for scientific research.

Under Johnson's watch, LLO grew in size and stature, and it maintained a strong focus on geophysical sciences because that was a unique and undercapitalized niche in large-lake science. LLO was instrumental in the International Decade for East African Lakes program during this time. Many internationally significant discoveries were made in that effort, including Tom Johnson's work on volcanic ash from the Toba supereruption in Lake Malawi.

In 2004, Professor Steve Colman was hired to lead LLO. The team of researchers launched much new work in Africa while establishing new observation platforms on Lake Superior. Faculty numbers grew and outreach programs were broadened.

LLO underwent a major renewal during the period of 2013 to 2016, replacing close to 50% of its faculty and increasing further in size. Residents and visitors to Lake Superior began attending a summer 'Science on Deck' educational series. Beginning in 2013, LLO invites members of the public on board to tour the boat and learn about research and education on the Great Lakes. Professor Eric Brown served as interim director before Robert Sterner took over as director in 2014.

LLO has continued to grow and broaden. Active areas of investigation include paleoclimate, carbon cycling, geomicrobiology, water, and ice dynamics, benthos and plankton dynamics, and ecological stoichiometry. LLO is active in graduate curriculum reform in limnology.

Lake Superior has been a primary focus. That hasn't stopped LLO scientists from conducting research throughout the world. LLO scientists have carried out major expeditions to the great lakes of the East African Rift Valley, Lake Issyk Kul in central Asia, Lake Nicaragua, Lake Qinghai in China, Great Slave Lake in the Canadian Arctic, as well as to smaller lakes around the globe.

More about the Blue Heron