Strengthening Ties to the Range Scientists, engineers and staff from SCSE toured the Iron Range to introduce new professors to the region and its resources.

The group embarked on the tour from August 14-16, 2019. Wendy Reed, dean of the Swenson College of Science and Engineering (SCSE), said, “Our mission as part of a land and sea grant organization is to serve the people of our state and region and that’s what the trip was all about. We planned three days to tour multiple places and met with key people in health care, natural resources, power generation, water, timber pulp and paper, mining, and environmentalism.” 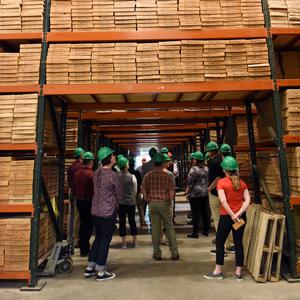 One of the stops on the tour was at the Department of Natural Resources Core Library where they store thousands of core samples from Minnesota.

Moe Benda also helped organize the tour. Benda is the Director of the University’s Iron Range Graduate Engineering Education Program, which provides distance learning opportunities to professionals in mining or related engineering fields. “It’s important our faculty have a solid understanding of the people, history, industry and issues of this region,” said Benda. “And by bringing these professors to the area to meet with Range leaders, we hope it will spur future collaborative efforts.” 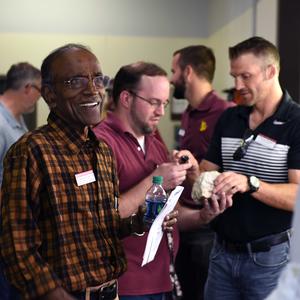 Professor Subbaram Naidu from the Department of Electrical Engineering

The road trip focused on three regions of the range, the west in Grand Rapids, central in Hibbing, and east from Virginia to Tower. Stops included: the Blandin Paper mill; a forest/timber stand; a Minnesota Power facility in Cohasset; the Natural Resources Research Institute in Coleraine; an industry networking lunch in Chisholm; a tour of the Department of Natural Resources Core Library and Wetlab in Hibbing; an alumni reception at the MN Discovery Center; a bike ride on a new stretch of the Mesabi Trail; Polymet tour; geology tour; lunch at the Heritage Center at Bois Forte Band of Chippewa in Tower, MN; and concluded with a tour of the Duluth harbor tour from the Duluth Seaway Port Authority.

“It was a packed three days and even during our time on the bus, we had speakers share their knowledge and generate conversation,” said Reed. “It was immediately obvious that the trip was beneficial and we hope to continue doing something similar in the future to strengthen ties and better serve the region.”

One of the new faculty members that participated in the tour Yongzhi Qu said, "It was very nice touring the Iron Range with my colleagues. It is the best team building tour that I have ever been to and it helped me a lot toward my understanding of the local industry, values, and for my teaching and research."

Above photo: SCSE Faculty and staff get a bird's-eye view of the Boswell Energy Center from the roof  during a tour of the Minnesota Power facility.

Learn more about Swenson College of Science and Engineering