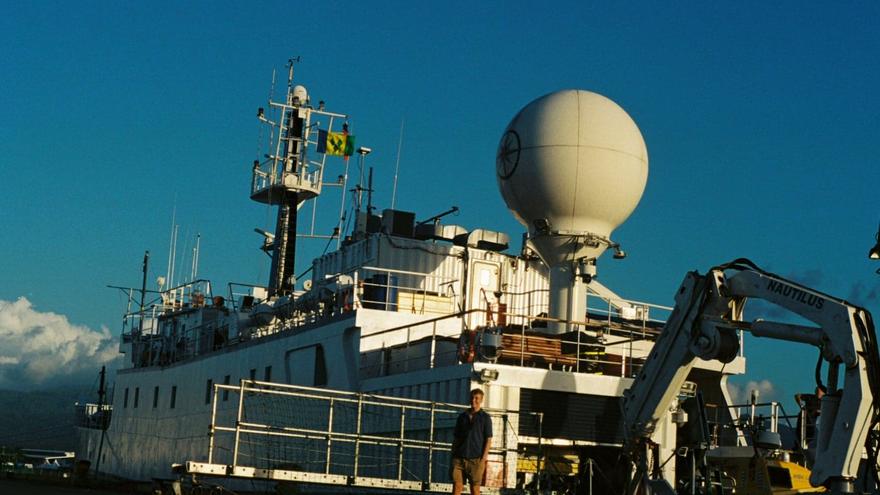 From the moment UMD alum Nova West could hold the family camcorder, they were documenting family events. 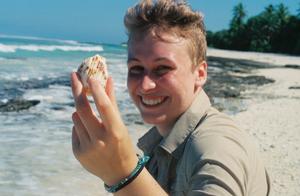 “I remember being really excited about how it changed my worldview, looking through that viewfinder,” explains Nova, who got a gig as a videographer for the local newspaper at age 15.

The College of Education and Human Service Professions’ Environmental and Outdoor Education program graduate ('17) never imagined this early passion for capturing moments on film would take them to a remote location in the South Pacific for work on a project to uncover one of the greatest mysteries of the 20th century.

The results of these efforts, “Expedition Amelia,” will premiere on Sunday, October 20 on National Geographic television. The documentary details a recent ocean exploration led by Dr. Robert Ballard, the renowned deep-sea explorer who discovered the wreck of the Titanic. The mission: to discover Amelia Earhart’s plane.

Expedition Amelia’s research and film crew spent 2 ½ weeks at sea this summer on a research vessel called the Nautilus. Nova was part of a two-person team responsible for digital imaging and assistant editing.

This meant ensuring video footage was properly backed up after each day of filming. It entailed sorting and prioritizing footage and reducing video files to make them easier to upload by satellite and send to editors back in Washington, DC.

Since some footage was taken by humans and some was taken by remotely operated underwater vehicles, syncing the video was also key, according to Nova. This made it easy for editors who weren’t on the expedition to pull different shots from the exact same moment.

Anytime Nova wasn’t working was spent observing and learning. Sometimes it was as simple as taking in the view on the deck. Other times it was talking with scientists or volunteering to help with aspects of filming and production.

Nova says it was an exceptional experience. “It was really a once in a lifetime opportunity to be part of something bigger than myself. There’s something about being in the place where things happened.”

How did a recent college graduate end up working on such a high-level television project? It began with a passion that was channeled into purpose.

Along with a fondness for filming, Nova’s love of the outdoors was cultivated in childhood, spurred by family camping trips to Northern Minnesota that proved an exciting contrast to daily life in Owatonna.

Nova’s parents granted their children the freedom to run around and explore the outdoors. “There was always this level of admiration for the natural world coming from my parents,” says Nova. “It was important to them that we understood how the natural world worked and explored it on our own.”

On a whim, Nova decided to check out UMD with a friend one weekend. They describe being awestruck at the view and the beauty of the lake and the city sprawled out ahead. “It’s absolutely stunning, no matter what time of year,” says Nova. “As soon as went over that hill the first time, I just knew. ‘This is the place I’ve got to go.’”

Nova started out as an art major but a year and a half in was struggling with the idea of graduating and not being able to find a job. Or working in a job that required being stuck inside all day.

At a friend’s suggestion, Nova signed up for an intro to outdoor education course in the Department of Applied Human Sciences. It only took one class. Nova was hooked and decided to switch majors.

“It felt so natural to me. Being able to not only be outside but to teach others while being outside and apply the creative energy I have towards that education,” explains Nova. “I wanted to find new ways to show people what the outdoors has to offer and why we need to protect it.

A course during Nova’s senior year presented an opportunity to incorporate video into teaching about the environment. Professor Ken Gilbertson was so impressed by the result that he took Nova aside to suggest an internship in the television industry.

Nova appreciated Gilbertson’s encouragement and recognition of their talent. “It was just a godsend that he thought of me. He saw so much potential in me … I was so excited about the possibility of this happening.”

In July of 2017 Nova packed up, moved to DC, and didn’t look back. For three months, they worked as an assistant production coordinator on “Trackers,” a National Geographic show about finding lost pets with search and recovery dogs. Then came another internship with GoodFight Media, where Nova had the chance to learn more about editing film.

During the second internship, a Nat Geo production manager reached out to Nova about an assistant editor job. Within a week Nova applied, got the job and was working on The Incredible Dr. Pol, a Nat Geo Wild series about a pioneering veterinarian.

Networking and being in the right place at the right time have been integral to Nova’s career success, but they admit hard work and enthusiasm factored in too. “If you do a good job and put yourself into your work, people really see that and they appreciate that,” says Nova. “I’ve also found being passionate and excited about a project gets other people really excited and makes for a really great work environment.”

Working on Expedition Amelia helped affirm Nova’s affinity for film and fieldwork and may help set their future course. Nova is considering going back to graduate school to delve deeper into aspects of environmental science, such as marine biodiversity and conservation.

Being on the expedition made Nova realize the potential and opportunities to use ocean exploration as a tool for talking about climate change. “We know so little about the ocean and yet it’s literally the lungs of our planet—it produces more oxygen than all the rainforests combined. People don’t realize how important it is to our livelihood,” says Nova.

As a queer and trans person, in the male-dominated film industry, Nova is also concerned about representation and inclusion. “It’s motivational to see when younger people in the queer community get really excited when they hear about the things I’m working because then they think ‘I could do that too,’” Nova says, “ I’m excited to inspire that in other people.”

Though the specific path forward from here isn’t clear, Nova looks to the future with enthusiasm and an open mind, ready to learn more, eager for the next adventure. In the midst of an array of freelance projects, Nova’s working to develop physical skills like scuba diving and rock climbing that would be helpful for work in remote environments.

“I’m really excited about being able to travel and see the world and be able to share the things that I experience. I also love the opportunity to learn about so many different places, cultures and creatures,” says Nova. “The world is so rich and full of life and energy. I find myself in the most strange but amazing situations. It really just feels like I’m living.”

Watch a live stream from the Nautilus.