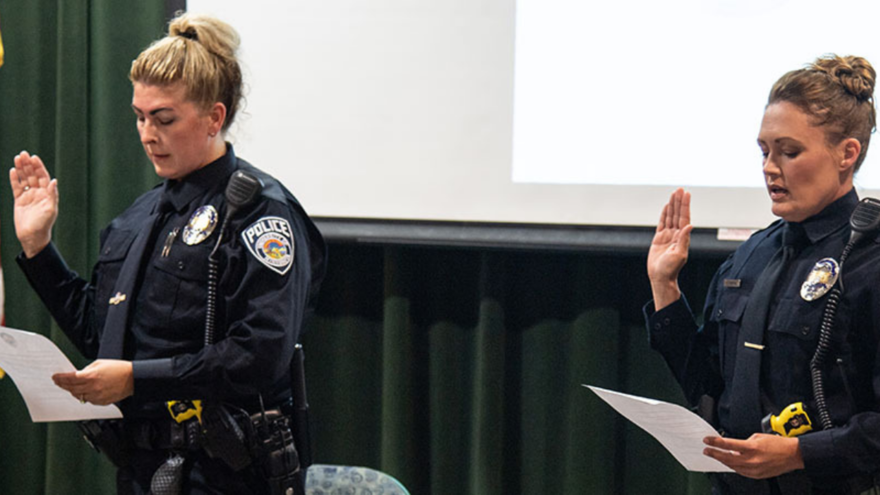 UMD welcomes the newest members of its police department.

The swearing in ceremony for Officer Dawn Valure and Officer Kalika Pukema was held on Tuesday, July 30, 2019.

UMDPD Chief Sean Huls notes that with these hires, his force is now comprised of an equal number of female and male patrol officers, while nationally women account for only 11% of police officers.

“You would be hard pressed to find a more caring, compassionate, and responsive police department anywhere,” says Chief Huls. “Research has shown that female officers like Officer Valure and Officer Pukema are having a profound impact on police culture. Women are  less likely to resort to the immediate use of force when safe to do so, and are skilled at using communication to help diffuse potentially volatile situations and at addressing violence against women.”

About Officers Valure and Pukema

After ten years in Colorado, Valure returned to Duluth and received her Bachelor of Applied Science in Law Enforcement and Skills Component from Fon Du Lac Tribal Community College in 2006.

Valure was hired as a Deputy Sheriff in 2008 for the Lake County Sheriff's Office where she worked for until being hired by the UMDPD.

Pukema was raised in South Range, Wisconsin and graduated from Northwestern High School in 1992.

She then joined the Air National Guard’s 148th Fighter Wing, served 10 years in the military, and is a decorated veteran.

Pukema went back to school and graduated with high honors from Fond du Lac Tribal and Community College in 2011 with an Associate of Arts degree in law Enforcement. She was chosen as squad leader, was awarded a service to the college medal, and was the second female ever to receive the Les Northrup Leadership award.

About the UMD Police Department

All UMD police officers are licensed by the State of Minnesota Board of Police Officer Standards and Training board.

UMDPD is dedicated to UMD’s campus and works with surrounding law enforcement agencies to keep the neighborhoods where students live, work, and recreate safe.