Coming Back from the Out Back 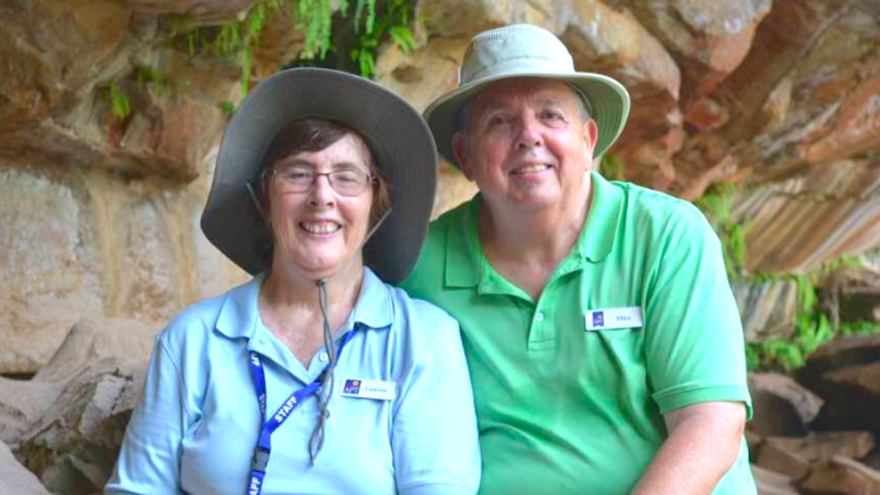 This summer, with UMD as their base, Mike and Leanne Schaul explored the U.S.

The year was 1975. Mike Schaul was just about to graduate from UMD with a teaching degree and a background in psychology, music, and art. “I had no idea what I was going to do,” he says. He stood in front of the employment notice board and read a listing, “Interested in teaching in Australia?”

Now, Mike was no stranger to world travel. In 1972, he took a break from UMD to travel with Up With People, spreading good will through musical performances on two continents. He thought about teaching in Australia: “Go to the other side of the world and teach? I can do this!”

He spent the summer of 1975 in training and wading through the working visa red tape, but on September 4, he left San Francisco for Brisbane, Australia. Mike arrived in Brisbane with 200 out of the 10,000 teachers Australia imported from the U.S., Canada, and Britain in the early 1970s.

He was greeted with some strange sites. He took old city buses and stayed at a decades-old “temperance hotel,” where no alcohol was allowed. “I went into a Woolworth’s store, expecting to see something familiar,” he says. But the arrangement took him by surprise. “All of the merchandise was set out exactly how the old five and dime stores looked in the small country town where my grandmother lived when I was young. The clerk wrapped everything you purchased in white butcher’s paper and tape.”

And then came his posting. “They handed me a tiny piece of paper,” he says. “I was assigned to Trinity Bay State High School in Cairns, about 1,000 miles northeast of Brisbane, on the coast.”

When the airplane landed in Cairns, he was greeted by a metal shed terminal, a shuttle bus, and a two-lane bumpy road. “I had $32 in my pocket. It was a drizzly day, with grey, dark clouds, and had no idea where to go.”

The day grew brighter when the bus driver dropped Mike at a family motel with rooms rented on a "bed and breakfast" basis. “My commitment was for 15 months, but I liked it there. I signed up for another two years and four years after that,” he says. One factor for his decision was the job market was bad in the Midwest; besides, Mike was having a great time.

Mike was transferred one hour north of Cairns to Mareeba in 1981. He was impressed by the mountains, landscape, and wildlife. “I liked it,” he says. “It’s tropical, so they grow mangos, papaya, and avocados and there are coffee plantations and wineries.” The diverse population of Italian and English immigrants and aboriginal people was intriguing.

Mike felt so comfortable in Mareeba, after a couple of months he adopted a dog and bought land.  And, “There was this quiet girl I met, Leanne. She was born and raised in Brisbane and, like me, had been transferred to Mareeba, as a high school teacher.” As things happen, they married in December 1981.

Leanne and Mike continued to teach at Mareeba State High School. Mike taught art, craft, photo, multimedia, and was also the art department coordinator. First he taught half time and served as the department head of Visual & Performing Arts at Education Queensland for the other half.

Leanne and Mike built a house and had three children, a daughter, Andrea, and twin boys Alan, and Andrew. In 1988 Mike completed a graduate diploma in school counseling at the University of Queensland.

He then worked as a school counselor for five years, but he missed classroom teaching. In 1993 he was appointed full-time Visual and Performing Arts Head of Department, responsible for art, photography, multimedia, music, dance, drama, and instrumental music. This position saw him teaching half-time and administering his department the other half.

He and Leanne both retired in January, 2012 with 67 years as professional educators between them.

Back to the States

“We’ve been back to Duluth a number of times,” says Mike. They’ve also been to countries around the world but most of their overseas trips have Minnesota as the focus. 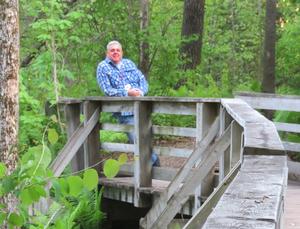 Mike on the Superior Hiking Trail

He and Leanne have traveled to nearly all of the states in the U.S. and visited UMD friends along the way.

When they found out about the UMD summer senior housing program, they got their reservations in early for summer 2019. They hired a car for ten weeks and their first trip was to see a friend from UMD, Sue Dack Jones. In fact, Sue and other friends packed up boxes of goodies for their stay in the UMD residence halls: a microwave, dishes, a crock pot, and more.

A summer in Duluth brought back memories. There is lots to remember about Mike’s days at UMD: living in a dorm in Torrence Hall, parties in Stadium Apartments, and being in the center of the action at his job at Kirby Desk.

A walk on the Superior Hiking trail among the birch, maple, and pine surprised Mike. “A short little wander into the woods really stirred some powerful remembrances for me.” He found himself surrounded by quiet in the middle of Duluth.  “There is an emotional connect between me, Duluth, UMD, and the North Shore of Lake Superior,” says Mike. “It stirs the creative juices and inspires poetry.”

About the UMD Department of Education