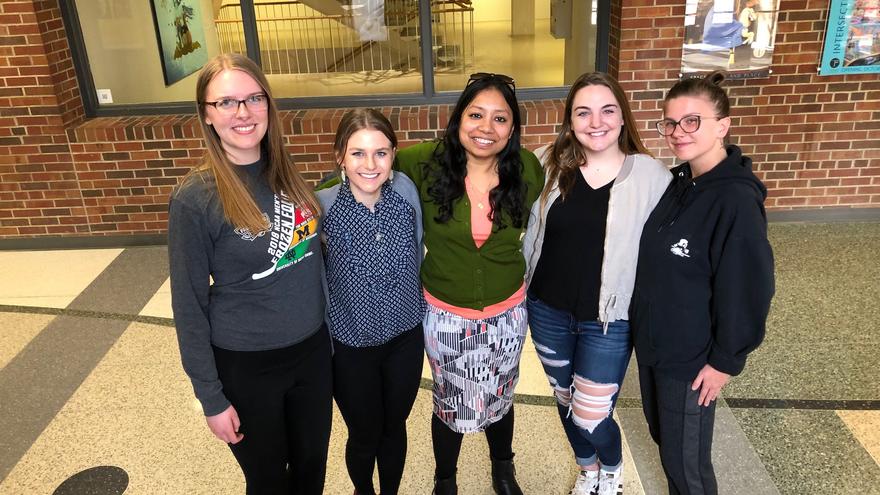 The three-day #MeToo Awareness conference runs April 19, 20 and 21. It is free and open to all.

Every one of these students has a story to tell about unwanted sexual contact. They tell stories that are personal. They tell stories about family, loved ones, and friends. They find inspiration in the #MeToo movement because the codes of silence are being broken about sexual harassment and assault. These four, along with Dr. Devaleena Das, an assistant professor of Women, Gender and Sexuality Studies, are among the organizers of a three-day #MeToo Awareness conference on April 19, 20 and 21.

This is the first UMD conference to address the #MeToo movement. It is a response to the sexual harassment and abuse allegations that have dominated the public's attention in the U.S. and internationally over the past year. Panelists and speakers will provide an in-depth look at multiple aspects of violence against men and women.

"This movement is not just about 'women' or only 'white women'," says Professor Das. "There are layers of intersectional identity components and social positioning. We are trying to show how a person's place in society (race, gender, sexuality, class, religion, abelism, ethnicity, colorism, caste, ageism) make it more complex in voicing the multiple vectors of power involved in sexual violence,"

Tarana Burke, the founder of the #MeToo movement, stated. "For women of color or trans people of color with disabilities, it becomes harder to get a platform to voice their concerns." In 2006, Burke established the group, largely to help survivors of sexual violence and raise awareness about sexual assault and harassment.

The first day of the conference will include a reception and keynote presentation by Dr. Sneja Gunew, professor emerita of English and women's and gender studies at the University of British Columbia, Canada. The second day will be a series of sessions and panel discussions. Musical pieces and physical and psychological exercises, such as yoga, will be held in between sessions. The third day offers a yoga workshop.

“There will be moments where we all will feel vulnerable, and it will be hard for us to process,” says Professor Das. “There are activities throughout the conference to help us with the emotional processing.”

“Awareness is the key regarding sexual violence, and empowering women and girls.” says Mikayla, a junior double majoring in Hispanic and international studies. “That’s why we need this conference. It will give people the resources that they need to do that.”

Olivia, junior journalism major and women's, gender and sexuality studies minor, agrees. She says people need to know more about basic human rights. “The conference will help our community critique itself,” says Olivia. “Duluth wears a friendly tourist face, and it's because of this that people tend to forget we are not totally sheltered from sexual violence,” 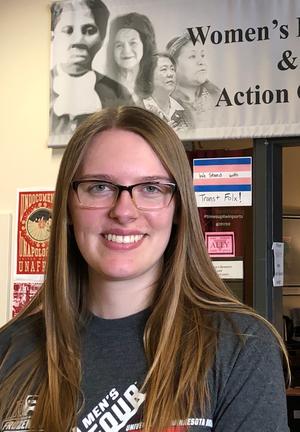 Sara Minder is a student advocate in the Women's Resource and Action Center at UMD.

Sara Minder, a senior double majoring in women, gender, & sexuality studies and political science, has a special interest in the conference because she is an sexual assault advocate for the UMD Women’s Resource Action Center (WRAC). She works with other students during open hours in the WRAC office at UMD for ten hours a week.

WRAC advocates go through 40 hours of Program for Aid to Victims of Sexual Assault (PAVSA) training. “We’re a confidential resource,” says Sara. The advocates provide support by listening to every story and validating experiences, providing information on available options, advocating, and making referrals to other agencies, with permission from the student. While Sara can't comment about confidential aspects of her work at WRAC, she sees the need for more education about sexual harassment and assault.

Audrey Baumgartner and Sara are PAVSA crisis volunteers, so the conference is relevant to the work they do. Audrey and Sara accompany sexual assault survivors to the hospital or work with individuals who call the PAVSA crisis line. Audrey, who is a senior double majoring in women, gender, & sexuality studies and political science and minoring in communication, is on her way to law school.

Audrey is especially interested in the Criminal Justice and Legal Responses to Sexual Assault session at the #MeToo conference. “We have police officers, lawyers, and judges coming,” she says. “Everyone needs to learn more. This affects everyone.” In the U.S., according to a Centers for Disease Control and Prevention study, one in three women and one in six men experienced some form of contact sexual violence in their lifetime.

The #MeToo conference includes the opening session on Friday, nine sessions on Saturday, and a Yoga class on Sunday. The topics for the Saturday program include Criminal Justice and Legal Responses to Sexual Assault, Healthcare and Sexual Violence, a #MeToo Media Forum, Prevention of Sexual Assault and Advocacy on College Campuses, and a session on Dismantling Rape Culture, among others.

This event is sponsored by the Women, Gender and Sexuality Studies, the Department of Anthropology, Sociology & Criminology, The College of Liberal Arts, the Women’s Resource & Action Center, the Alworth Institute for International Studies, and the University of Minnesota Medical School, Duluth Campus.

About the Women, Gender and Sexuality Studies minor

About the College of Liberal Arts