Toward a Stronger UMD

During afternoons in spring and fall 2019, about 30 grade school kids tossed footballs, threw basketballs, and jumped rope with UMD football players. They were at the Laura McArthur school playground in West Duluth as part of a program called the Key Zone.

The men played with the children. They held the jump rope and ran after balls. “The kids were super comfortable approaching us,” says Javien Versey, a psychology major and one of the football players. “Even on the first day, they seemed excited to see us. Their faces lit up.” As the visits increased the men got to know the children.

“Once, I saw one of the Laura McArthur boys in my neighborhood in Brooklyn Center,” said Dayvia Gbor, another football player and exercise science major. “He must have been visiting relatives.” The two had a stronger bond in Duluth after that.

Versey and Gbor; along with exercise science major Justic'e King, civil engineering major Chamere Thomas, and others, are members of a new student group at UMD, Black Men Serving Excellence, or BMSE. The young men have done more than participate in Key Zone. They partnered with the UMD Men's Basketball team for a youth basketball camp on the Martin Luther King, Jr. holiday and they presented a Black History Jeopardy event in February 2020. 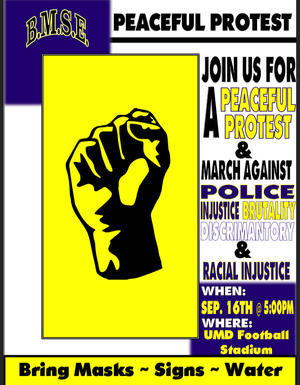 In fall of 2020, they want to be a force “for raising awareness and change,” says Gbor. Their mission statement says it all, "To create a bond of Brotherhood with like-minded individuals. To cultivate young Black leaders, and to strive for excellence in all of our endeavors."

The pandemic took away opportunities in spring 2020 but now that students are coming back to campus, BMSE is launching an ambitious endeavor. They are organizing a Peaceful Protest and March against Police Injustice, Brutality, Discrimination, and Racial Injustice at 5 pm on Wednesday, September 16, starting in the Malosky Stadium on the UMD campus.

“The march isn't meant to be threatening. It’s meant to show solidarity with everyone at UMD, faculty, staff, students, and the community,” said Versey. Defensive Backs Football Coach Marcus McLin, the group’s advisor, agrees. “This is a peaceful protest against injustice. It’s not anti-white, and it’s not anti-police.”

The group began talking about the march in late August. They took some time considering what should be done. “We thought about it for several days,” says King. BMSE is too new to be an official student organization, so the young men asked Coach McLin to talk to UMD administrators and the campus police. “When he came back and said people want to sponsor us, help out, and be a part of the protest, it brought relief to me,” King said.

Safety is important. Everyone should wear masks and stay six feet apart. Marchers are asked to bring water and signs, and gather on the football field. The march route will wind through campus.

BMSE has a mission to cultivate and strive for excellence in all of their endeavors, while also creating a bond of brotherhood. The upcoming march on September 16 fits with their goals.

Versey says, “We want to serve and represent our community and show that we can defeat the stereotypes that society holds against us.”

They have intentions to raise awareness for the voices of black students on campus and “make UMD a safe place for everyone to come,” says Thomas. Coach McLin won't give up when it comes to helping UMD become stronger. “This is where we live. This is our community, and we want to help make the changes.”

Most of all, the group is providing a voice for black students by having a peaceful protest and march. We want to “challenge each and every person in the community to take the initiative against injustice,” says Gbor.

About the UMD Department of Civil Engineering

About the UMD Department of Psychology

About the UMD Exercise and Rehabilitation Sciences Program