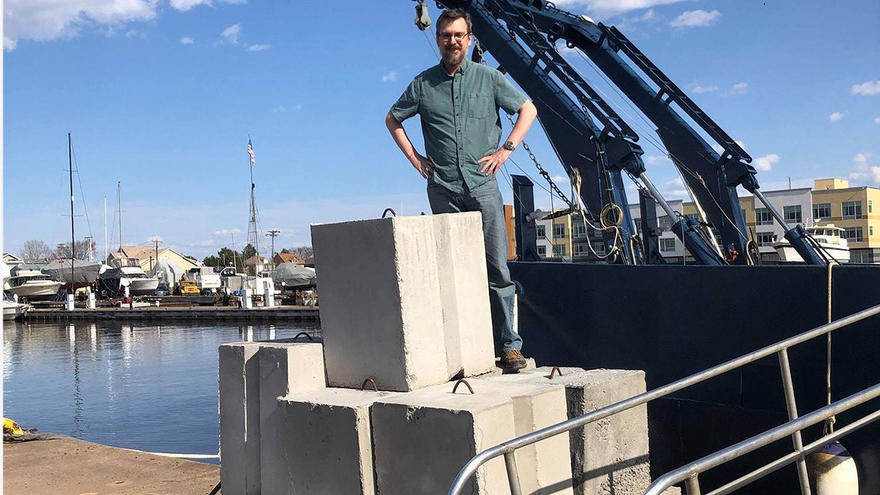 In an attempt to answer novel and complex questions, UMD’s LLO deploys equipment designed to take data from Lake Superior.

In May 2019, about 30 miles from the Minnesota shoreline, eleven people — UMD students, staff, faculty, and ship’s crew — began assembling, as Jay Austin from UMD's Large Lakes Observatory (LLO) says, “an enormous horizontal mooring” to gather data about convective cells in Lake Superior. The crew built it piece by piece on deck, and as the components were ready, lowered them deep into the lake. When they completed the endeavor, the structure dwarfed Duluth’s Aerial Lift Bridge.

First they fastened steel cable to 1000-pound concrete block weights (see photo with Jay above). Next came the massive steel floats at the top of the mooring. The critical horizontal line, spanning the width of the experiment, followed.  Finally, five lines were suspended from the upper span to near the lake bottom, with several temperature sensors attached to each. Once the assembly was complete, there was still a huge undertaking left. The R/V Blue Heron had to tow one side of the concrete weights away from the other side in order to lower the top of the assembly 100 feet below the water’s surface. 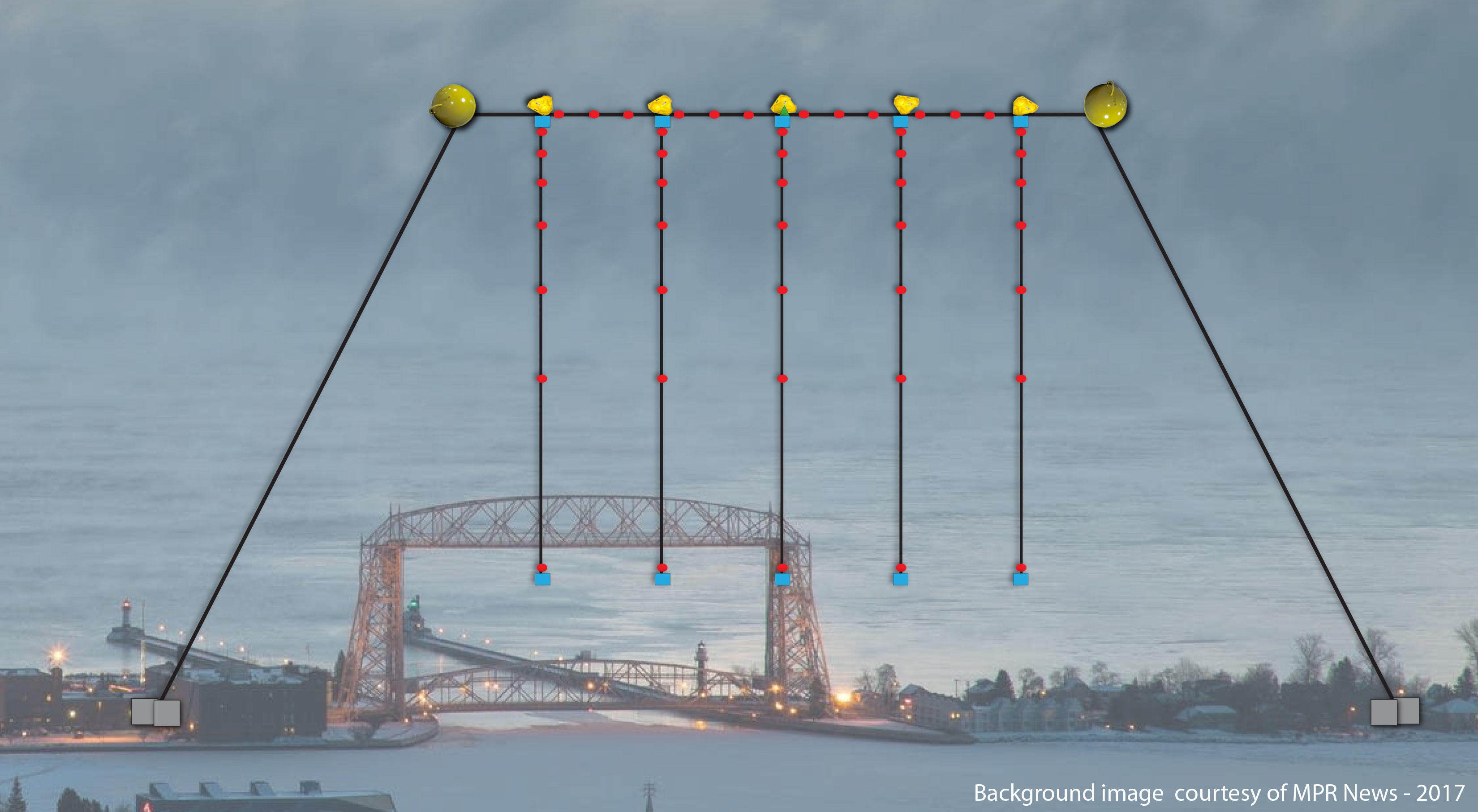 UMD’s LLO has had experiments moored under the surface of Lake Superior since 2005 but this is the first one that resolves features horizontally. It is gathering temperature data from five columns, not just a single column, extending near the lake floor. The data was collected over a several week period between May and July. In addition, data on currents and surface meteorology was collected, some of which was transferred in real time to the LLO facility, and some which will be analyzed after the equipment is brought back to the lab.

The UMD-led study, funded by the National Science Foundation, with partners from the University of North Carolina, Scripps Institution of Oceanography and the University of California-Davis, looks at convective cells in Lake Superior water. “It’s almost more of a fluid dynamics experiment than limnology,” says Austin, who is the principal investigator on the project and UMD department head and professor of physics and astronomy.

Convective cells occur in air and water and many factors impact them. The result is a circulation pattern such as those seen in oil heated on a stove, or, as Austin says, “the pattern you sometimes see in a bowl of miso soup when it is cooling.” This 2019 Lake Superior project looks at temperature structure, as well as horizontal and vertical velocities in order to determine the character of convective cells in Lake Superior.

A similar mooring was constructed in 1998 by the Woods Hole Oceanographic Institution to study internal waves on Georges Bank in the coastal Atlantic. The 2019 LLO experiment is much bigger and takes place in deeper water than the 1998 experiment. At nearly 1000 feet wide by 500 feet tall, and resting 100 feet below the lake surface, the experiment will gather the most comprehensive set of data on convective processes in lakes ever collected.

As the data is analyzed by UMD students over the next few years, the study will add to the body of knowledge about the complex behavior of Lake Superior and other large lakes around the world. It’s an “enormous” undertaking indeed.

About UMD's Department of Physics and Astronomy

Top photo: Jay Austin and a stack of the 1000-pound concrete weights.
Upper center: Ten of the crew members who assembled the experiment.
Lower center: A schematic of the horizontal mooring, with the Duluth Lift Bridge shown for scale. (credit: Craig Hill. Lift Bridge image: MPR).
Bottom photo: The buoy that collects meteorology data for the convective cell experiment.