Challenging Women to Change the World 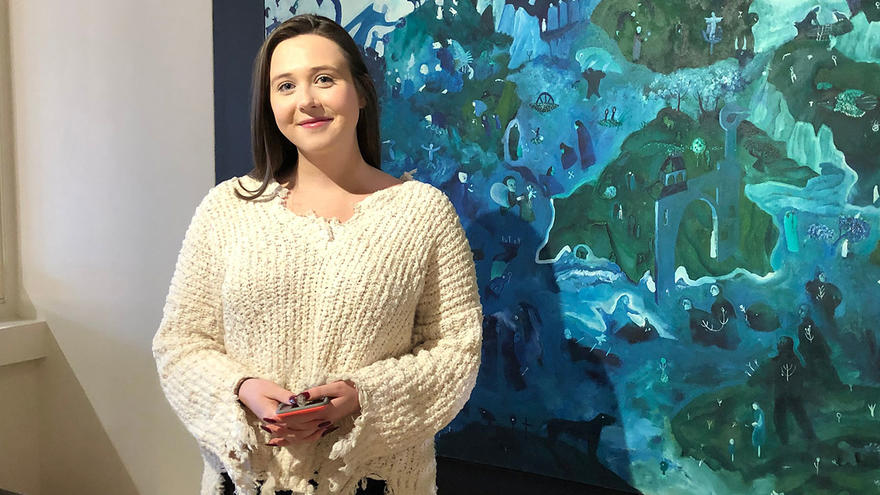 Lexi Finnegan finds her voice with help from the Jane Maddy Scholarship.

Lexi Finnegan, a senior at UMD, was sitting in the library when her phone dinged. Lexi casually glanced at the screen, unaware that the message she had received was notifying her that she had been awarded the Jane Maddy scholarship. As soon as Lexi read the email, she called her mom to share the good news. “I was freaking out in the library,” Lexi said, “I was so excited.”

As a double major in Women, Gender, and Sexuality Studies (WGSS) and International Studies, with a minor in Political Science, Lexi’s time at UMD has been far from dull. She has spent the last two summers as an intern in challenging roles.

In 2018 she spent the summer with a United Nations program in New York City, and in 2019 she worked in downtown Minneapolis at the Global Rights for Women program, which is a nonprofit organization that works internationally to help women, focusing specifically on domestic violence issues. “Every day, women around the world face terror. In many countries, sexual assault, domestic violence, and sex trafficking aren’t even crimes,” says Lexi. “The program works on creating or changing laws to protect women’s rights.”

That internship was a goal she had been working toward since her freshman year at UMD. With only eight people working in this high-impact program, the experience taught Lexi that, “you don’t need to be a... billionaire to make a difference.”

Lexi grew up in a feminist family and jokes that she has feminism running through her blood. “I always knew that I wanted to do this type of work and advocate for women and anyone that is marginalized in our society.”

Lexi shares that she wanted to come to UMD because of the women’s movement scene in Duluth. She admires the programs in the city and said that some of the work she did with the Global Rights for Women program was based off of the Duluth Model program. The Duluth Model, a domestic abuse intervention project, was developed in Duluth and has been used around the world to reduce domestic violence against women.

Lexi says that winning the Jane Maddy scholarship only affirms what she already knew. “This is what I am meant to do,” she says.

The Jane Maddy scholarship is awarded twice annually, providing selected students with anywhere from $500–$1,000 in finances. It is dedicated to women's studies and feminist causes.

The scholarship honors UMD alumna and faculty member, Jane Maddy, MA ’68. She was one of the founders of the women’s studies major at UMD and a professor of psychology.  Lexi received the award her junior and senior year for her work within the program, which she says has changed her entire life.

“It has helped me find my voice and my identity and the importance of... advocating and being strong and being powerful and using your voice,” Lexi explains.

Looking through a Different Lens

The women’s studies program has prepared Lexi for real world experiences by teaching her to critically examine society, the economy, and power structures or, as Lexi says, “how to look at things.”

Lexi has two projects due during her final months at UMD. She has conducted research connecting acts of violence against women with men who perpetrate mass shootings for her WGSS senior seminar paper. She is also researching how limited access to water around the world has a disproportionate effect on the lives of women. Her paper about access to water is for her International Studies senior seminar.

Although some of the topics discussed in classes can be difficult, Lexi says that “being able to have discussions and being respectful too is a very important lesson.” She says that the lessons learned in the program can be applied to almost any field of work.

“The person I was my freshman year has been dramatically changed by this program,” Lexi explains, “The advisors, the students, the professors, just every person in the program has made an impact on my life, and I am so proud to soon be an alumni of the program.”

After graduation, Lexi hopes to help women through an international program such as Global Rights for Women. She has applied for several jobs and has already received two offers.

About Women, Gender, and Sexuality Studies Program
About International Studies

This story was written by University and Marketing and Public Relations Communication Assistant Izabel Johnson, who is a UMD student majoring in journalism and minoring in communication.