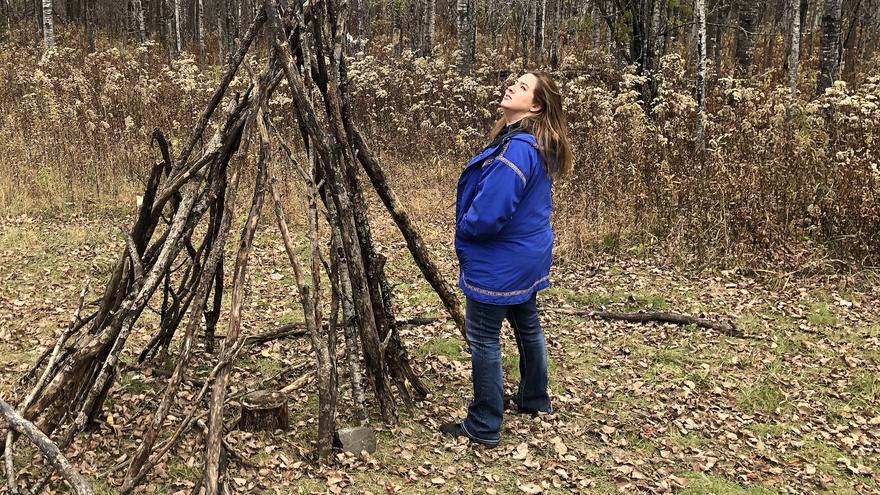 Stowe Elementary students are playing outside on a chilly day. They have abandoned their coats and are calling to each other and running around. Leslie Bucar is close by, unphased, smiling at the kids. While most adults would be upset at the lack of layers, she knows this is not disobedience.

Instead it is a result of her past year of work. Her students have been with her in the classroom, recreation center, and forest through all seasons at Stowe. She says, “The students have become acclimated to the cold since I began my position with the environmental education program.”

Built with an Environmental Vision
In the nineties, Stowe Elementary School, which is located in Gary New Duluth, was improved with a new building with environmental education in mind. It helped that they had 19 acres containing forest, trails, a lab, a pond, and a courtyard to set the foundation for their new environmental school.

The progress started out successfully but, at some point, the funding ran out. In addition, Stowe suffered from tougher standardized tests and a state mandated curriculum. That's when Jennifer Frisch, a UMD associate professor in the environmental education program, jumped in to help with grant writing.

When Nathan Glockle took office as principal a year later, he championed the original environmental vision for Stowe. He became the administrative support needed to pave the way to renewal. He continued using Jennifer's help, and the school restarted the environmental education program at Stowe.

The perfect fit
Jennifer wanted the program to be bigger than just the classroom. She wanted to have an environmental impact on the community.

Jennifer learned of graduate student Leslie Bucar who seemed to be the perfect fit for Stowe. A member of the Gary New Duluth community for over 13 years, Leslie had studied teaching life science and biology as an undergrad.

Jennifer hired her, and Leslie began making the transition to this program easier for the community.

Leslie had support from a University of Minnesota system Grant-in-Aid. Her efforts have not only affected Stowe students and families, but Gary New Duluth as a town.

The community involvement has been vital. Members have shown up at the school and volunteered their own time and resources, including teaching gardening during recess clubs.

In fact, some members turn Stowe’s food waste into food for their pigs. The community benefits. The new recreation center, forest trails, soccer fields at Stowe are now accessible to everyone living in the area.

Leslie’s Impact
The recess clubs created by Leslie when she first came to Stowe are still in place today. Recess gives the students a taste of new outdoor experiences such as snow shoeing, gardening, and fort building. Students sign up for after school clubs during recess.

“I wanted to be a resource for teachers rather than a burden,” Leslie said. Creating all that activity in the school was spurred on by the teachers’ assistance and willingness to change their curriculum. They too received support. The teachers' efforts developing and implementing environmental education were supported by a National Oceanic and Atmospheric Administration Bay Watershed Education and Training grant.

Students are getting more than the ability to recognize tree species. The active work allows them to release energy productively, and become more focused when they are back in their classroom. Jennifer also has the goal of getting students to see the outdoors as a safe space. While students come from many different home lives, they can appreciate the outdoors on many levels.

Making the Forest Available to All
Leslie is most proud of the school forest accessibility. She had marked two trails in the forest, an accessible one and a longer one. Teachers can choose what fits best, and it solves the issue of getting lost in the forest.

Now, students of all needs can experience environmental education. She also honors the large Indigenous student population. She painted the courtyard benches white, yellow, red, and black, the colors of the medicine wheel, and aligned them in the traditional way of north, east, south, and west.

Indigenous names and teachings are also currently being worked into the curriculum, and there are plans to bring in members from the community to teach their traditional knowledge to students.

As a second-year graduate student, Leslie is preparing her thesis on the effect of mentoring in environmental education on elementary teachers. "I learned a lot,” Leslie says. “I was surprised by teachers who have taught for over 20 years being so willing to add new things and ideas to their curriculum.”

About the Master of Environmental Education

This story was written by Britney Leanos, a UMD student majoring in environmental science.