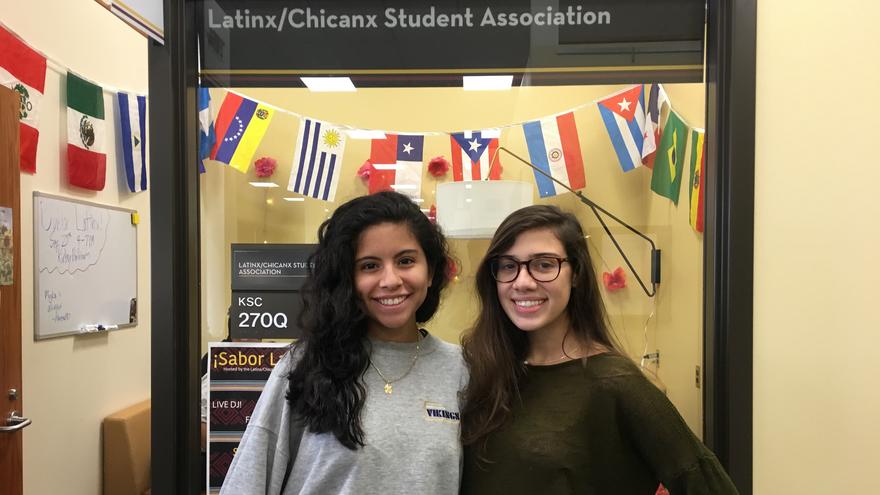 Two UMD students make it their priority to welcome all students.

Clouds hovered above a group of students as they breathlessly made their way up the 105 stairs of Enger Tower. The color of the blue sky blended with Lake Superior in the distance, as the students stared out from inside of the stone building. Then they turned towards a camera and posed. The view overlooks the places where most students find recreation. The Aerial Lift Bridge in Canal Park shone in the distance as a beacon. This was their new home.

Tanya Granville and Lesley Fierros were among the group that day at Enger Tower. Now, they are leaving their mark on UMD’s campus. Through taking on roles of leadership and a drive for setting an example for minority students to come, these two juniors at UMD are impacting the Multicultural Center. Their ability to prioritize the progression of diversity and knowledge about the minority groups is invaluable.

Tanya, a UMD public health major, came into UMD as a first-generation student. She came with ambitious goals. She wants to go on to grad school, and not only is she on track to do this, she is leaving her mark on her journey. Tanya’s goal is to become a pediatric occupational therapist. Tanya’s niece sees an occupational therapist that Tanya is very thankful for. That is the reason Tanya wants to give back to that community.

Tanya broke ground when she made the Dean’s List in spring 2019. Tanya’s family was extremely moved. Tanya says, “I was so excited I called my family and I was crying. They were saying how proud they were. It made all the early mornings and late-night struggles worth it.”

As a volunteer for the Office of Diversity and Inclusion and a treasurer for the Latinx Chicanx Student Association, Tanya extends a helping hand to other students. When speaking about why she has such an active role in the Multicultural Center, she says, “I want people to know there is a safe space here. I am your advocate.”

Lesley, a UMD  communications major, also has a role in leadership as an event coordinator with the Latinx Chicanx Student Association. In addition, she works within a mentorship program; she “dips her toes” in work for the Black Student Association; and she volunteers to help out the Office of Diversity and Inclusion.

As a first-generation student, Lesley hopes to set an example for her younger brothers, “Being first-gen is being a kind of model for my younger brothers who are in high school.” Lesley tells them, “ You can do it, you can go to college and get an education and get a degree.” Unsure of her dream job, Lesley says she just wants to help people and make the world better in any way that she can.

Tanya and Lesley are strong advocates for UMD, but they have suggestions. “I like that a lot of the staff here are really understanding and acknowledge people’s backgrounds to provide a more accepting environment,” says Tanya. “But the classes where professors are really accepting are the few places besides the Multicultural Center where people of color feel comfortable. There needs to be more safe spaces for people of color,” suggests Tanya.

Lesley appreciates having the Multicultural Center, advisors, and the Office of Diversity and Inclusion to welcome students to campus. However, she suggests that while freedom of speech is important, it is equally important to hold accountable the speech that is harmful or insensitive to other students.

Tanya and Lesley are taking on roles to make an impact on how diversity looks at UMD. They give credit where it is due, and where they see places for improvement, they respond. They write their names down, put up the posters, and raise awareness.

This story was written by Rikkia Walker, a student majoring in journalism. Rikkia works in the University Marketing and Public Relations office at UMD.