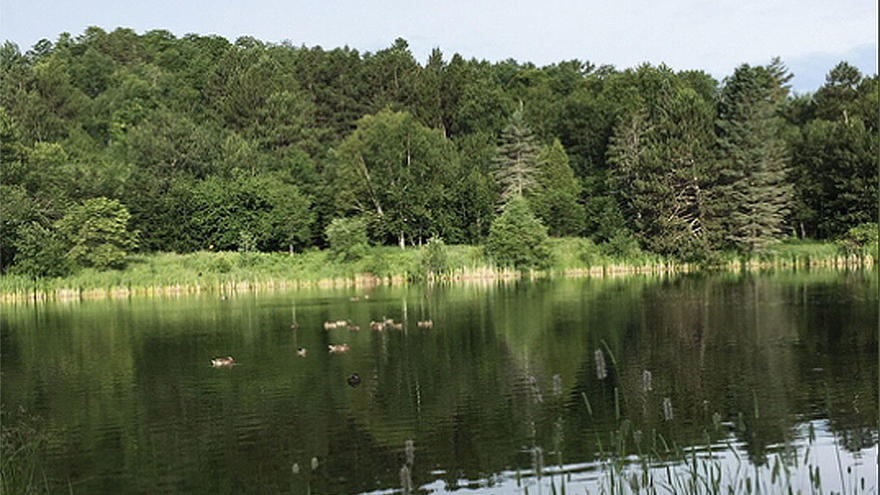 Respecting indigenous peoples and their enduring relationship to the land.

When Wayne Dupuis ’87, was asked about the Land Acknowledgement under development at UMD, he shared insights about the Duluth that existed hundreds of years ago.

“The whole hillside was covered in white pine,” he says. Not the white pine we see today. Many of the trees were over 400 years old. Their girth was often more than 10 feet around, and they grew to heights of 150 feet.

Wayne is the environmental program manager for the Fond du Lac Band of Lake Superior Chippewa. He also has the responsibility to supervise the Tribal Historic Preservation Office. “The area that is now Duluth was called Onigamiising, or the place of the small portage. The creeks were called ziibiins." In the creek that runs through campus, trout climbed uphill from Lake Superior, Gichigami.

The land that is now occupied by UMD was home to bear, moose, rabbit, and deer. Porcupine, mink, marten, fisher, and partridge were plentiful. Nearby maples provided maple syrup and birch bark yielded the material to make canoes and shelters. Throughout hundreds of years, the site was occupied by several Native American tribes.

UMD recognizes that it is located on the traditional, ancestral, and contemporary lands of Indigenous people. A formal Land Acknowledgement was crafted over many, many months and discussions involved groups across the campus. It was endorsed by the Minnesota Indian Affairs Council on June 4, 2019.An event will be held on Tuesday, October 22, 2019 at 3 p.m. in the UMD Kirby Ballroom to read the Land Acknowledgement, a formal statement that recognizes and respects the relationship between the Indigenous peoples and their ties to traditional lands.

One part of the statement refers to Wayne’s description of the physical properties and significance of the land. “The University resides on land that was cared for and called home by the Ojibwe people, before them the Dakota and Northern Cheyenne people, and other Native peoples from time immemorial. Ceded by the Ojibwe in an 1854 treaty, this land holds great historical, spiritual, and personal significance for its original stewards, the Native nations and peoples of this region.”

An important section details UMD’s commitment to healing. “We recognize and continually support and advocate for the sovereignty of the Native nations in this territory and beyond. By offering this land acknowledgment, we affirm tribal sovereignty and will work to hold the University of Minnesota Duluth accountable to American Indian peoples and nations.”

The Land Acknowledgement is part of a story of centuries of oppression, but it is also a story of strength and resurgence. The Ojibwe language is an example. “There was the loss of a language by the generations that were impacted by acculturation imposed by the colonizers,” says Wayne. He talks about the boarding school days when children were taken from their homes and punished for speaking Ojibwe.

Now, classes, workshops, and language gatherings of all kinds are being held. UMD teaches dozens of American Indian Studies classes every semester. And even though it will never be the same, “many are learning to speak Ojibwe again.”

The Land Acknowledgment asks the entire campus to be accountable to its part in history. It’s one step toward recognizing the unique and enduring relationship that exists between American Indians and their territories. The university community wants those connections to grow strong and for all to increase their awareness of the history of the land on which UMD resides.

About the UMD Land Acknowledgement