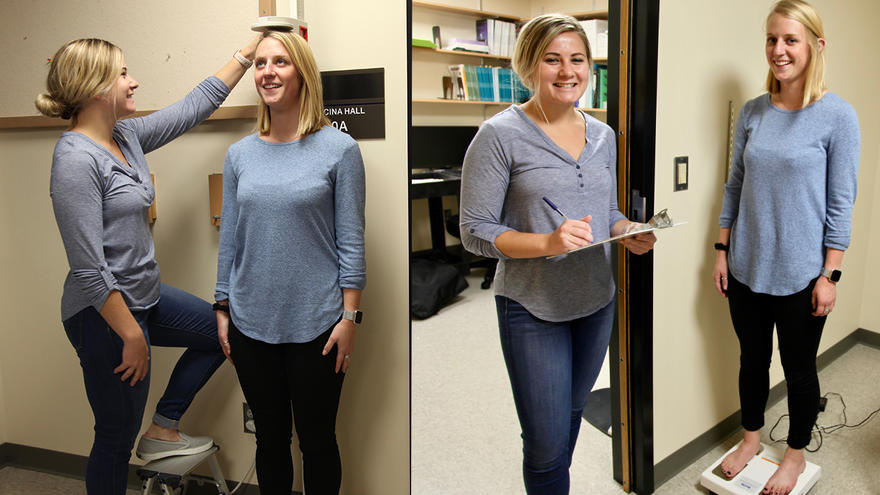 As a fresh-faced college student, it’s easy to slide into unhealthy eating habits.

Weight gain is so common that “freshman 15” was coined to describe the additional pounds a student might pack on in that first year.

Associate Professors Lara and Rick LaCaille are embarking on a longitudinal study at UMD this fall to help better understand what’s behind such weight fluctuations. The husband and wife research team are based in the College of Education and Human Service Professions’ Department of Psychology.

Lara notes that this weight gain in that first year of college could be more accurately described as the “freshman five,” as studies have shown that students typically gain three to five pounds. Though a few pounds might not seem significant, the weight gain—and the behaviors that led to it—can still be problematic.

As Rick points out, “People don’t become obese over the course of a year. It’s the little, daily decisions that add up to have that result.”

The LaCailles run the Healthy Living and Learning Lab (H2L), which is focused on investigating topics at the intersection of psychology and health. “We look broadly at general wellness and how it’s linked with self-regulation. More recently we’ve been interested in the social context and how that influences psychological needs, such as one’s sense of autonomy or competence,” says Lara.

The team’s preliminary, cross-sectional survey of UMD students indicated weight changes and unhealthy weight control behaviors are related to students feeling that their psychological needs are not being met. This data informed their new study, which targets first-year students and is anticipated to extend beyond this year.

“Beginning college is an important transitional point in life. Students are relocating, leaving their families, meeting new friends—and in many ways starting over,” explains Rick.

With such a major life change comes stress and an opportunity for negative behavior patterns—such as unhealthy eating—to emerge. The study will seek to tease out the factors that exacerbate this. “What is it about the college experience that is not supporting or is actively thwarting student needs?” asks Lara.

A team of 10 psychology students (six graduate and four undergraduate) will play an important data collection role, interacting with participants to take height and weight measurements. They’ll also be involved in initial survey testing and recruitment as well as data interpretation.

Ultimately this work could inform strategies to intervene, including education, programming, or even considering university policies to help mitigate negative health outcomes. “The hope is that our results can include recommendations at the individual, social, and institutional level about changes that could be made to help students,” Lara says.

If students complete both parts of the study, they’ll receive $25. For more information or to participate contact: umdfreshmanplus@d.umn.edu.