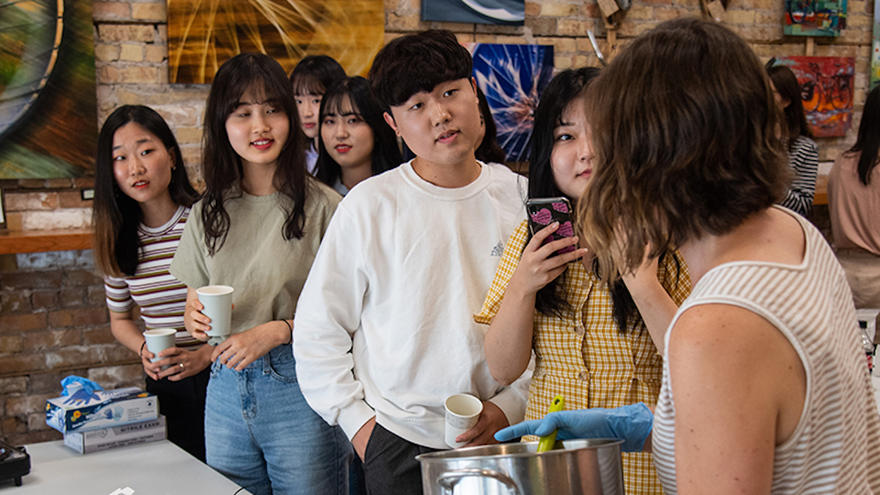 Twenty undergraduate students from South Korea are spending a portion of their summer at UMD. For the first time, UMD is presenting an Introduction to American Environmental Writing from the North Woods to students from Kyung Hee University.

The students alternated their daily intensive writing classes with visits to UMD programs and community organizations. Habin Kim, one of the students, was pleased with his experience, "The program is teaching us many fields: literature, linguistics, history, philosophy, and environmental studies," he says. All of the students are English majors, and while a few of them want to be English language teachers, their career goals are varied.

Surim Back also says the program is valuable. She eventually wants to be a public official. "I want to learn diplomacy," she says. "I'm very interested in the relations between South Korea, North Korea, and the United States."

Songhee Cheon, who comes from a small town outside of Seoul, is looking forward to a career as a "cultural marketer," a job that is similar to Chamber of Commerce personnel in the U.S. "We need to tell the story of the best parts of our cities," she explains. "We also need to educate others about the negative effects people are having on the environment." She says the program at UMD will help her prepare for that goal.

Linda LeGarde Grover, an American Indian writer and faculty member at UMD, is meeting with the Korean students about her book, "Onigamiising: Seasons of an Ojibwe Year." The class is also visiting the cultural museum at the Fond du Lac Band of Lake Superior Chippewa. Yurim Jeong has a special interest in the topic. "I plan to work as a translator, and I'm curious about different cultures," she says. Yurim is an avid reader of Korean literature and is quick to point out books in English that have been translated from the Korean language.

The field trips have exposed the students to American culture and environmental sustainability. A class at the Duluth Folk School (see top photo) gave them hands-on experience using natural methods to make hand soap. A trip to the Mall of America (MOA), was a crash course on consumerism, but it was also a lesson in how the MOA recycles and reuses more than 90 percent of its waste, from cardboard to cooking oil.

Other sites the group visited included the Large Lakes Observatory's Blue Heron research vessel and the Natural Resources Research institute. Excursions to Bayfield and the Apostle Islands in Wisconsin, as well as the Glensheen Historic Estate, rounded out their immersion into the Upper Midwest.

Geonhee Kim, who is pursuing a career teaching the English language, was especially attracted to the UMD summer institute because of Lake Superior. "Relaxing in the environment, breathing clean air, and spending time on the beach are wonderful," she says. "The outdoors is so beautiful, it's really comforting."

UMD staff are pleased the program is going well. "The students are participating in discussions facilitated by UMD faculty members," says Dr. Susan Maher, a professor in the Department of English, Linguistics, and Writing Studies. "They are studying three Minnesota writers, sociolinguistics, and learning new theories and perspectives on American environmental (nature) writing."

For more information: Department of English, Linguistics, and Writing Studies.