The Continuation of a Calling 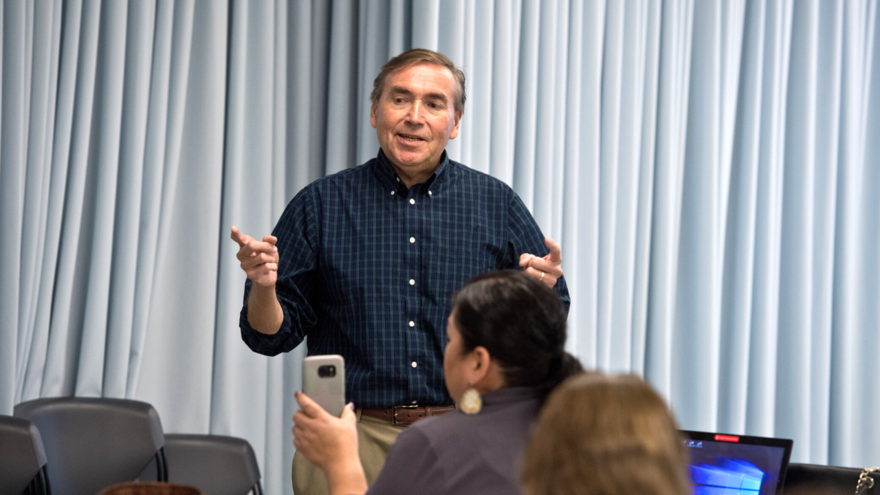 A brand new position with the University of Minnesota system is allowing UMD's Tadd Johnson to continue his life's work.

"My life has been listening to the tribes."

One of Tadd Johnson's favorite Ken Kesey quotes is serving as the edict of his career's third act: "Always stay in your own movie." So before Johnson accepted the role of the University of Minnesota's first senior director of American Indian Tribal Nations Relations, he asked himself, "How does this jibe with the plot I've been following?"

It's a story that started 45 years ago with the signing of the Tribal Self Determination Act, which empowered tribes with self-governance legislation. Johnson says this has been the center of his career. "That whole act and movement came out of listening to Indian Country, and my life has been listening to the tribes."

The Catalyst for His Career

Johnson grew up in Duluth's Lakeside neighborhood as a member of the Bois Forte Band of Chippewa. He worked for decades as a leader in Federal-Indian law and policy and as a tribal attorney and a tribal court judge. A career highlight was being appointed to chair the National Indian Gaming commission by President Clinton in 1997.

When he got to UMD in 2010, Johnson continued his work by consulting with tribes to develop a program that would teach every aspect of tribal governance. "After the Tribal Self Determination Act, the bureaus were off the reservation, and we wanted to train tribal leaders to govern their reservations." UMD's Master of Tribal Administration and Governance program was built through two years of Johnson consulting with tribes. "When I asked applicants why they pursued the program they answered, 'Because you did exactly what we asked you to do."

When the University of Minnesota began looking for someone to serve as a liaison between the University and tribal nations, Johnson, the director of the Tribal Sovereignty Institute and of Graduate Studies in the American Indian Studies department, was on the radar. He'd advised the Board of Regents about consulting with tribes in the past.

Johnson was named the University's first director of American Indian Tribal Relations in November, but will be housed at UMD and continue his work on campus and with surrounding tribes. This expertise and connectedness is what U of M Vice President for Equity and Diversity Michael Goh highlighted when the inaugural role was announced, adding, "We look forward to working with Professor Johnson to consider ways we can demonstrate our deepest respect for the sovereignty of our Tribal Nations."

Johnson has a vision for what can be accomplished through this elevated opportunity for consultation. He sees tribes engaging with the University in the same way that the Minnesota Indian Affairs Council engages with the State of Minnesota. "The ideas are in Indian Country," explains Johnson. He sees a lot of projects in which tribes could utilize the University of Minnesota and vice versa.

And importantly, this allows for an ongoing dialogue between the University and tribes, who often feel invisible. "That's the most common term I hear when dealing with Indian folks. They feel a little invisible."

"If I can help the University of Minnesota listen to the tribes in a better way, I think that could lead to some enlightenment on both sides– probably more on the University side. I think they might learn more than they had expected from the tribes. I always have."