Vietnam, a Professor, and a Pandemic 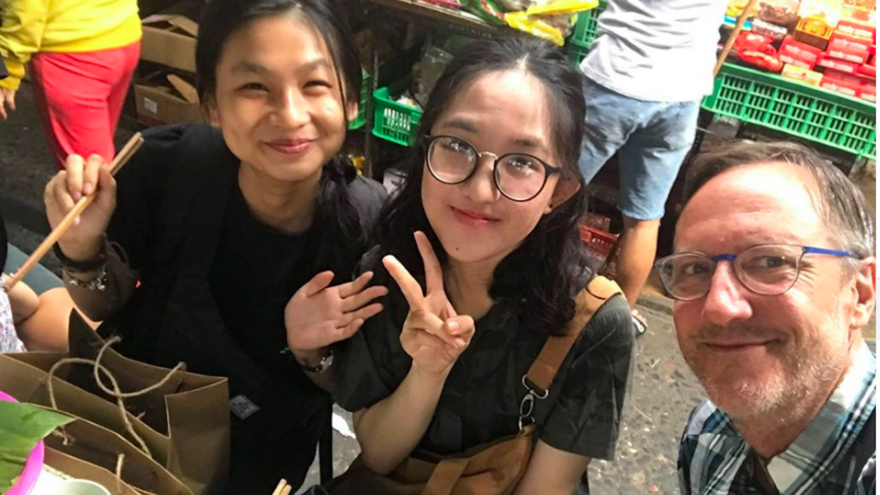 John Hatcher, UMD associate professor in the communication program, arrived in Vietnam in September 2019 on the Fulbright Visiting Scholar Program. For three months. he taught classes at Ho Chi Minh University of Social Sciences and Humanities (USSH), Vietnam’s national university. “When my teaching obligations [at USSH] ended, I spent the month of November traveling to other universities around the country,” he says.

That November, he made a long visit to the University of Danang and other universities, giving workshops, presenting guest lectures, and meeting with faculty and students. He made valuable connections with professionals in his field.

Then, just after the Tet holiday, the coronavirus completely changed life in Vietnam. He wrote, “No school. No travel. No visits from family or friends.” He waited, but the pandemic continued, and John had to cut his Fulbright short.

The last day was the hardest. On a narrow lane, below John Hatcher’s Ho Chi Minh City apartment, breakfast was in the works. “You know, it's a restaurant and it’s not a restaurant. It's like a food stall with a grill and folding tables,” he says. 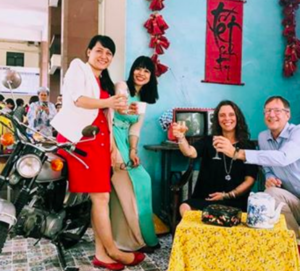 The family, a husband, his wife, and her two sisters, set up the chairs and, around 5 am, started cooking in the narrow lane.

Most mornings, John and his partner, Heather-Marie Bloom, would wake to smells coming from the small alley. They left their apartment before the city heated up.

The canal was a beautiful place to walk. There, older people exercised in groups. “They do calisthenics… aerobic dance, and tai chi.” Then, the two Minnesotans would come back to their restaurant for Cơm Tấm, (pronounced cough-tom), a dish made with rice, pickled vegetables, egg, and BBQ pork. Vegetarians, John and Heather-Marie skipped the pork.

But the last day wasn’t like the others. It was time to say goodbye. John approached the husband. “He spoke a little bit of English. I told him we have to leave because we were going back to the United States.” Word had already traveled throughout the alley neighborhood.  The man says, “Yes, yes, yes, we know,” and there were tears.

“It was not the way we wanted to… to say goodbye,” John says.

John made many friends on his abbreviated Vietnamese adventure. At the university, he taught a small class of 20 students. “It was a similar kind of journalism as I do here in Minnesota, where I had them go out and discover the stories of life in the community.” They produced a website that the students named, “Hey Saigon.” 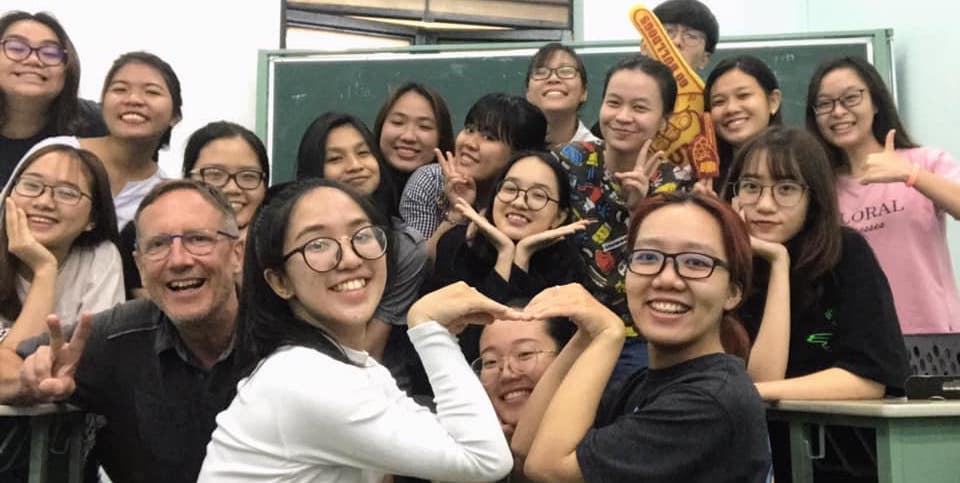 One of John’s first friends was Doan Khuyen, a professor and journalism historian. “She was just so kind to me. She invited me to her lovely home to meet her daughter, Dang Thuy An, who's a high school student."

John, Doan, Heather-Marie and An developed “a wonderful relationship” as the months passed. 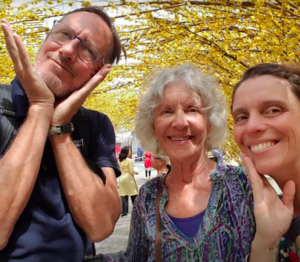 Friends of Doan and An joined the group for cooking lessons. “They taught us how to make Vietnamese dishes,” John says. The recipes became favorites, spring rolls and a dish called bánh xèo (pronounced ‘bahn say-oh’), a rice crepe with shrimp. John’s mother, a spry octogenarian named Maxine, came for Tet, the national new year holiday. They celebrated with flowers, lion dancing and fireworks. The air pollution index dropped from hazardous to moderate, so they were able to remove their face masks.

Maxine, John, and Heather-Marie toured the lively Thi Nghe Market with two of John’s students from the fall semester (see the banner photo above). A highlight was bánh xèo prepared by one of his student's grandmothers. The student's mother and two great aunts also worked in the market.

For Maxine’s 12-day visit, they took in the Saigon sights, and wandered, too. They saw Vung Tau, a peninsula city surrounded by ocean on three sides, and they traveled to Cat Tien National Park.

When John’s new year vacation was over, he returned to the university. COVID-19 had hit other parts of the world, but not Vietnam, still, classes were postponed. 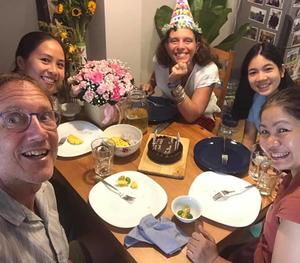 A birthday party with Lan Zoukactera, a Fulbright scholar, Heather-Marie, Dang Thuy An, and Đoan Khuyen.

Rather than sitting around waiting for things to change, John took An and her high school friends on a trip to the American Center. They learned about the EducationUSA program and opportunities to study in the United States. “These young people are fun, smart and engaging. I would love to have them as students in my own classroom.” he says. He’s hopeful that An can come to the states. “Who knows, maybe she'll be a Bulldog.”

With classes cancelled, John and Heather-Marie were able to explore. They went to Phong Nha province and visited the site of the Ho Chi Minh Trail.

Reality eventually arrived. “I had just finished doing a workshop with faculty,” John says. “We all made connections and I was going to come visit their classes when they resumed. It was so much fun, we all took pictures together.”

When John walked out of the classroom, he turned on his phone. The subject line on the email said, “Urgent.” It was from the U.S. State Department to Fulbright scholars around the world. John got the message, “They wanted us to go home.”

John says, in spite of the turmoil, “I was honored to carry on the Fulbright tradition of representing our country overseas.” In fact, because of the crisis, he may have built even more of the one-on-one “intercultural relationships” the program was meant to foster.

With his continued frequent Facebook posts and email messages back and forth to Vietnam, John has a unique perspective. “Vietnam started to shelter in place long before most countries,” he says. It’s a Communist country and the leadership was decisive. “Our friends in Vietnam couldn't believe we were leaving,” he says. They worried that John and Heather-Marie weren’t going to be safe. “They were so surprised, because they've done a much better job of controlling the virus.”

As of early May, 2020, that story is still true. Vietnam has population of 95 million people, primarily with very low incomes. Yet, they have less than 300 cases of the virus and no deaths. “School just opened again.” John says.

John isn’t certain if he’ll work with the Fulbright program again, but he’s sure he wants to go back. He regrets missing opportunities. “I was supposed to partner with a woman faculty member in Danang.”

Everybody's checking in on each other and John still looks at his planning calendar. It helps him “think about all the all the other relationships and partnerships that we were supposed to have.” It also helps him stay connected to Vietnam. “I’ll never forget the people I met.”