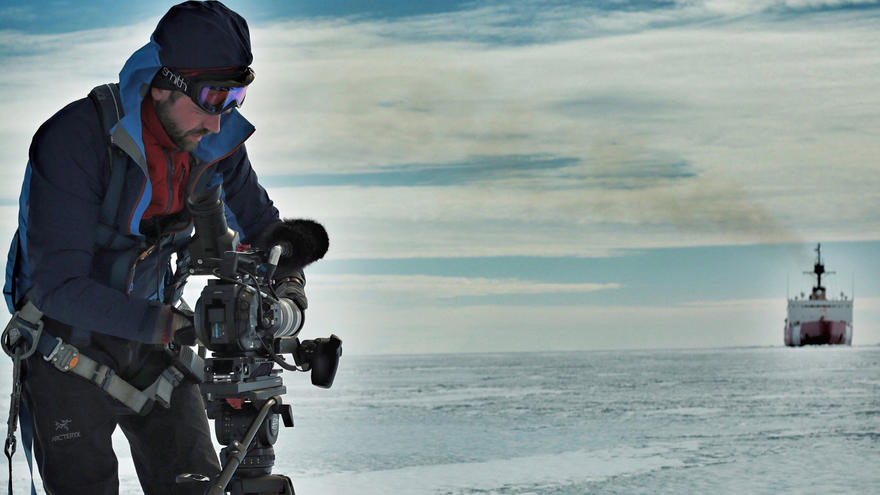 The Environmental and Outdoor Education program graduate ('07) has traveled the world to work on a variety of film and journalistic projects. His work has appeared on National Geographic Channel, NOVA, Discovery Channel, Outside, PBS, and more.

The intrepid explorer and Emmy-nominated filmmaker is the host of “Lost in the Wild,” a new Travel Channel series that premieres Sunday, December 29. He’s also the keynote speaker at the AdventureMN Film Fest on November 7 in Minneapolis.

Kelley grew up on a farm in Taylors Falls and his adventures began in the forests around his home. Trail hikes turned into off-trail adventures as Kelley began to crave a challenge. “I walked in every direction I could,” he says. “I wondered, ‘Can I find my way from point A to point B?’”

High school treks fueled Kelley’s curiosity and desire to venture beyond his hometown. The day after graduation, he flew to Manila to help a classmate who had been adopted from the Philippines find his birth mother. The pair spent two months searching and eventually found her.

During these travels, Kelley says he experienced a wide range of emotions, from profound loneliness and culture shock to euphoria and bliss. The dramatically different environment and perspectives energized Kelley, who says he became “thoroughly addicted to getting out of my comfort zone and seeing what this planet had to offer.”

Choosing a Life You Love

After his trip to the Philippines, Kelley started college. But his original plan to study ancient language and culture wasn’t the right fit. After a year, he quit, packed up his pickup, and started driving.

“That thing I went to school for initially I didn’t love. It wasn’t making me happy,” he explains.” “I felt like I was wasting a precious life. We’re only given 60 or 70 years—if we’re lucky—on this planet. Why do something that you don't love?”

Alaska proved to be a more suitable classroom for Kelley. He lived in a tent, worked as a kayak guide and became enamored with an adventurous outdoor lifestyle. Then he traveled some more.

When Kelley learned about UMD’s Environmental and Outdoor Education program he decided to move to Duluth to pursue his passion. “I was the happiest person in the world when I realized I could go to school for this—for teaching about and protecting the outdoors,” he says. “And it was amazing that a program existed in the state I was from.”

While at UMD Kelley immersed himself in academics, he loved the classes as well as extracurricular activities like the Nordic ski team and outdoor club. But his wanderlust also prevailed. After a semester, he left school for a year to hike the Appalachian Trail. It took three months to prepare for the arduous trip and five months to journey by foot from Maine to Georgia.

“That expedition made me realize so many things,” says Kelley “It was a lot of hard work to do it, but I had profound breakthroughs and epiphanies. I thought it was a shame to waste that and I started to wonder if there was a way to tell those stories and share them with others.”

An opportunity for storytelling came in Kelley’s final year at UMD. One of the course assignments was to organize and execute an event. His vision for the project extended far beyond the campus boundaries.

The “event” he dreamed up was a 1,200-mile bike trip across Alaska, from the Pacific to the Arctic Ocean. Kelley and a friend made the pilgrimage together, captured their travels on video, and created a documentary, “Pedal to the Midnight Sun.”

Kelley credits UMD faculty in the Department of Applied Sciences like Professor Ken Gilbertson for supporting this idea—though unconventional—since it fit with the program’s mission and they saw his passion for it. Making that first film was a key step in solidifying Kelley’s career path.

When it was time to cap off the program with an internship, Gilbertson had an idea. “Kelley showed exemplary skills in communicating through videography,” he says. “I knew the senior editor for National Geographic and suggested Kelley aim high and apply for an internship there. Well, the rest is history. That was certainly an internship well spent with a man of exceptionally high talent.”

National Geographic staff were impressed with Kelley’s application. They not only offered him an internship in Washington, DC, they also aired a version of his bike documentary on the network. After that three-month internship, they hired him.

Kelley credits the internship with jump-starting his career. “I love that the program requires an internship,” he says. “I wouldn’t be where I am professionally if not for that,” he says.

Because of his penchant for travel, Kelley likes to take jobs that allow him to see more of the world. He’s now been to 100 different countries in the course of his work. And he’s proven his versatility, assuming a variety of roles related to storytelling. He’s worked as a cinematographer, host, and director. “I’m the only person I know that will get hired for all of those different aspects of filmmaking,” he says. 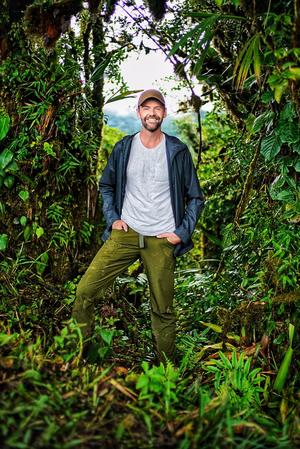 Lost in the Wild

In the last several years, Kelley has been embracing the new role of telling stories on camera. He worked as a producer and correspondent on the “Explorer” National Geographic Channel’s flagship documentary series.

When the Travel Channel approached Kelley to host “Lost in the Wild,” it was a challenge he couldn’t resist. “I transitioned pretty seamlessly to being the on-camera person,” he says. “Now it’s my job to be completely engaged with the story. To become a nerd about every aspect of it. To be mentally present and engage with the experts we have on a story.”

Making the eight-episode series has entailed months of near-nonstop travel. The show is set in remote locations around the globe like the Galapagos Islands and the Panamanian jungle. Each episode Kelley and his co-host Kinga Philipps delve into “some of history’s greatest adventures gone wrong.”

The first show of the series looks into Christopher McCandless’ mysterious death in the Alaskan wilderness. Kelley remembers reading about this story years ago and it still resonates with him, as he says McCandless was someone who lived passionately and sought out adventure but was a little naive and had some bad luck.

As someone who has been on plenty of risky expeditions, Kelley recognizes he’s been fortunate so far. He thinks episodes of “Lost in the Wild” can serve as cautionary tales that will hopefully teach people to be safer as they make their way through the world.

Action for the Planet

Kelley’s ongoing concern for the planet is a theme in his projects: many contain elements of environmental activism. He’s covered a range of topics, from the impact of ocean trash on wildlife in Alaska to the enduring effects of the 1989 Exxon-Valdez oil spill.

One of the career accomplishments he’s most proud of is a yearlong investigation into the slaughter of elephants for their tusks. Making “Warlords of Ivory” entailed substantial risk. It involved the creation of fake elephant tusks with GPS tracking devices that ultimately helped pinpoint the location of nefarious ivory traders and gun runners. It also landed Kelley and his colleague in a Tanzanian jail (the faux tusks were so realistic that Kelley and his colleague were arrested for illegal wildlife trafficking) for a night.

The film earned Kelley an Emmy nomination for cinematography. More importantly, the documentary and a related National Geographic magazine cover story raised awareness, eventually helping prompt the closure of Chinese ivory-carving factories as well as a crackdown on illegal poaching in Africa. When the investigation started, elephants were nearing extinction, now their population has started to rebound.

Kelley never really knows where the next job might take him. And that suits him. He’s pleased to be at a place in his career where he can be discriminating about what projects he takes on.

“I do have control over the body of work that I can create and the message I can tell with my work,” he says. “And what I can leave behind is the stories that I’ve told and how that influenced society. So, I try to choose projects that I believe are creating good.”

The Bachelor of Applied Science (B.A.Sc.) in Environmental and Outdoor Education is a degree offered by UMD’s College of Education and Human Service Professions. It familiarizes students with informal outdoor education settings and provides extensive training in outdoor education methodology and program delivery. Learn more.