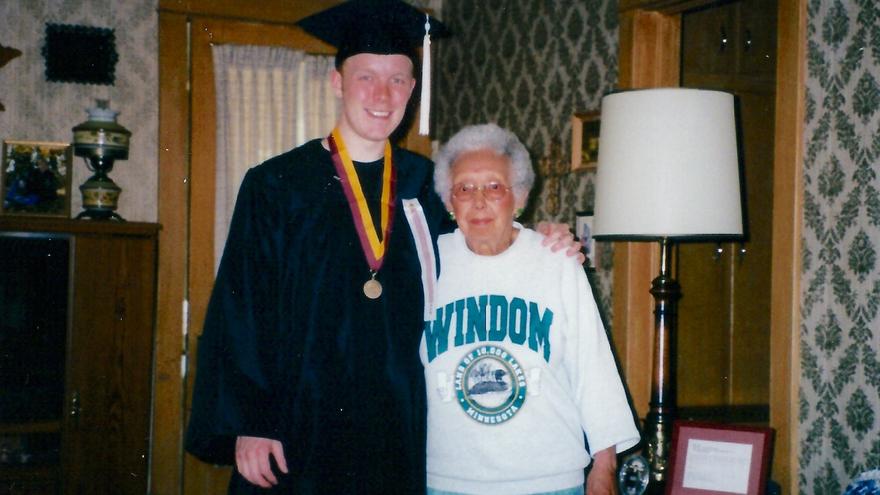 When James Lehnhoff ’02 was growing up, he spent nearly every vacation and half of his summers with his best friend, Betty Jacobson. The two would sit on the porch on warm evenings, eating ice cream, playing cards, greeting neighbors, and talking. The 60-plus difference in their ages didn’t matter.

She was a “second mother, grandmother, and mentor,” to him, especially because his parents moved frequently. “Windom was a quiet little town with a town square and a small business district. We moved nearly 20 times when I was a kid and although my family moved away from Windom when I was a baby, it came to be my home because of Betty.” 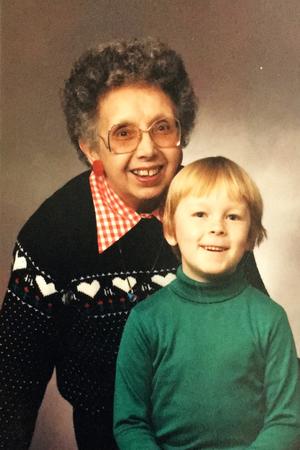 The friendship between James and Betty started when James was a baby. Betty worked as a waitress at his grandparent’s restaurant in Windom. When his mother was first looking for a babysitter after he was born, Betty quickly volunteered to watch him.

Even as James’ family moved to different towns throughout Minnesota, he continued to visit her. The relationship between James and Betty remained close friends until she passed away at the age of 99 in 2009.

“Betty let me turn her front porch into my own fort,” James says. “I remember putting up a sign that she had to knock to enter, and eventually I rigged up a little doorbell.”

Betty treated James like an equal, giving him private space, paying attention to his opinions, and loving him unconditionally. “We had so many adventures together. We would go to Iowa to visit her family, take the bus to the Twins games at the old Metrodome, and walk to downtown Windom to get ice cream.”

Betty encouraged James to go to college and when James faced paying tuition, Betty gave him a $5,000 check. “I was shocked when she gave me that check, and I knew I was going to be O.K.” James says. “It wasn’t the money, it was that someone had my back.”

At least once a semester and over holiday breaks, James would drive down to Windom and visit Betty. She was unable to attend his graduation, so James came down afterward and posed for a photograph in his cap and gown with her. 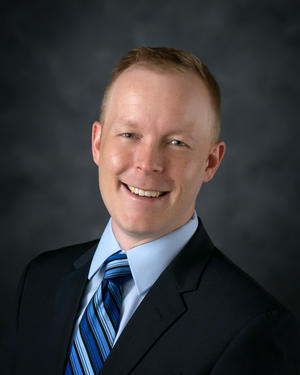 At UMD James took a while to find his calling. “I started in electrical and computer engineering but then went to the business school. However, I loved all the geography classes,” he says. James did well in the geography program and received the Matti Kaups scholarship.

Two of James’ favorite geography professors, Scott Freundshuh and Gordon Levin, encouraged him to apply for a summer National Geographic internship. He was one of nine interns selected to work at the National Geographic Society office in Washington, D.C. in 2001.

There he worked on their website, the National Geographic Expeditions website, and wrote content. “I met amazing leaders from all kinds of fields,” he says. His supervisors would arrange for famous experts to share lunches and dinners with the staff and students.

James was able to spend time with a renowned urban planner, and he came away with a new resolve. He felt a strong calling to pursue the urban planning and community development field.

After graduating from UMD, James was on an urban planning trajectory. He earned a master’s degree in urban and regional planning from the Humphrey School of Public Affairs and launched right into in the field.

He started as a consultant planner for the Community Growth Institute in Brainerd, Minn., and then went on to be the city planner and Community Development Directory for the City of Arden Hills, Minn.

In 2010, he began as a senior project manager and later rose to vice president of housing development with Aeon, a nonprofit affordable housing developer based in Minneapolis. His next position was as a municipal advisor at Ehlers, an organization that works with local governments on bonding, economic development, and housing development.

In March 2019, he was appointed as the new assistant commissioner for the multifamily division at the Minnesota Housing Finance Agency. At Minnesota Housing, James leads the state’s efforts to develop and preserve rental homes that are affordable throughout Minnesota. “I am honored to work at Minnesota Housing with an amazing and talented team that cares so deeply about providing affordable homes,” James says.

All along the way, James says, “I wanted to help make Minnesota better for everyone.” James says that Minnesota as a state will be stronger if it can provide stable housing that is affordable to those that need it. “Housing is the starting point for better health and education outcomes, especially as we work to build strong communities and a strong workforce for the future.”

Betty lived a long, full life. Her husband died in the 1950s and they did not have children. Betty semi-retired from the Toro lawnmower company in the 1970s but ended up working at two different restaurants and then a laundromat until she completely retired in 1995. 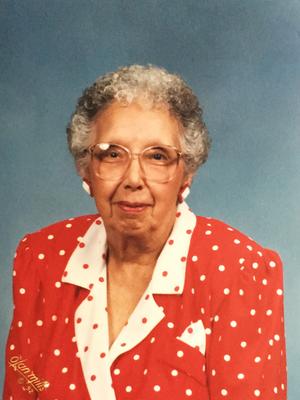 Shortly before Betty turned 95, she wasn’t able to stay in her home any longer due to health reasons. She moved into the local nursing home and made James the executor of her estate.

“I saw how much she sacrificed to help me make my life better. She showed me the importance of hard work, education, and listening. She also let me be a goofy kid that needed to learn lessons along the way,” he says. “That made a deep impact on me.”

With James by her side, Betty passed away when she was 99 years old. “She was an amazing woman,” James said.

This past year, James contacted UMD to set up scholarship in Betty’s name. “I wanted to honor her in a way that she would be proud.”

The multi-year scholarship will support a student studying geography. He’s paying it forward. “I’m so grateful to Betty. I don’t know where I would be without her. She was always helping people, and this feels like something she would want.”

About the UMD Geography Program

Photo above: James and Betty in Betty's home in Windom.