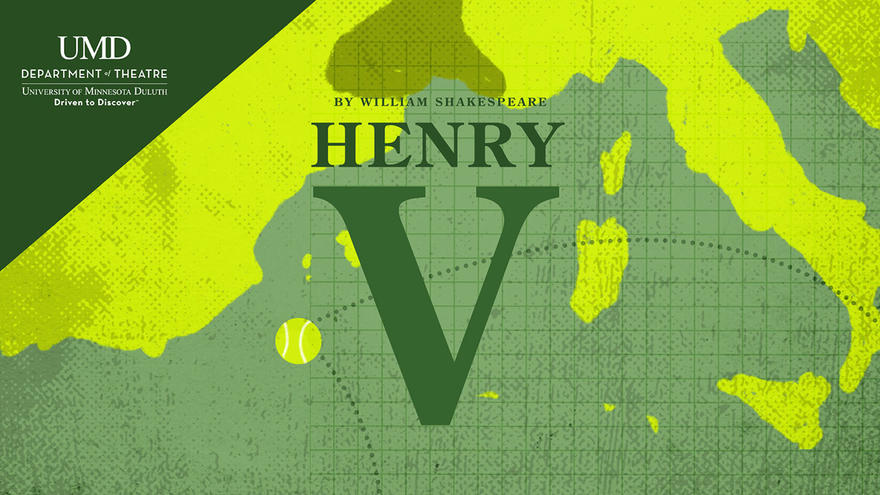 UMD Theatre's first production of the 2020–21 season will be free and outdoors.

Registration is now open for this FREE event @ z.umn.edu/henryv. Space is limited. Register online now to reserve a spot.

Due to COVID-19, safety protocols will be in place at UMD Theatre's performances of Henry V for cast, crew, and audience members. Masks required: UMD Theatre is asking cast, crew, and patrons to all wear masks for the safety of everyone involved.

"For 'tis your thoughts that now must deck our kings"
Professor Tom Isbell adapted the play and is directing the show. Before the pandemic, the play would have been performed inside the Marshall Performing Arts Center, but Isbell believes that performing it outdoors in UMD's Ordean Court has its advantages. "The actors are discovering a rawer, more organic form of theatre than maybe what they're accustomed to . . . and maybe that's for the better. There's not as much reliance on the traditional spectacle, which is just how Shakespeare describes it in the opening prologue to the play. It couldn't be more apt."

The venue gets them in touch with early 17th century productions of the play. "I think the thing that's most exciting is that, because we're outdoors and the audience is as illuminated as the actors, the actors are discovering a truer sense of what it was like to perform in Shakespeare's day, when performances were mid-afternoon. The actor/audience relationship is really different when everyone is in sunlight, and frankly, I think it's closer to how Shakespeare intended his plays to be performed."

In addition, everything that would normally be printed and handled by staff and audience members, such as tickets and programs, will be accessible via smartphone, so there should be no exchange of paper.

The current plan is for UMD performances to be either outdoors or online until it has been determined safe for large groups to gather indoors. Admission to fall 2020 UMD Theatre outdoor or online events will be free of charge. UMD Theatre views its tentative 2020-21 schedule as a goal rather than a promise. The Department will continue to adapt the 2020-2021 Season as circumstances regarding the pandemic continue to evolve.