A Gift of Rare Books 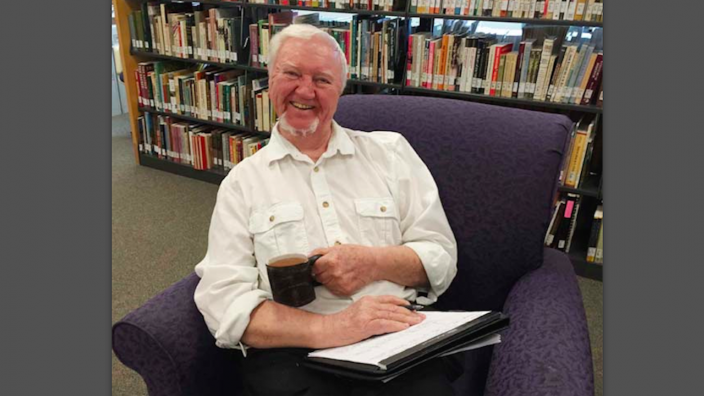 UMD receives an impressive collection of books about the lives and histories of indigenous people.

Pharmacy Professor John Staba is a book lover of the highest caliber. His appreciation for books and his five extensive book collections have taken him across the United States in search of hardcover gold.

“I’ve spent decades in bookstores, antique stores, and libraries,” John said. He’s been to library sales and flea markets too, making mental lists of important books that could fill holes in his sets. “When I found a book that could enhance my collection, I was thrilled.” 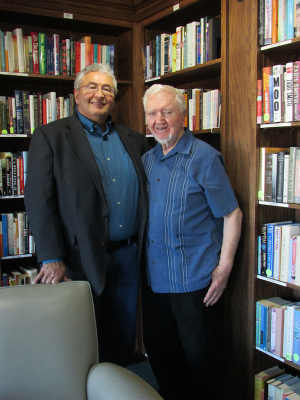 These books are landing on these shelves not because of the quality of the collections and the library facilities they join, but due to the relationship that developed as John and Rick traveled the Northland to visit the librarians and trustees from these institutions. During this time, the two forged a strong connection, which developed the trust in which John could faithfully place his collection.

John, a professor of pharmacy in the Department of Pharmacy at the University of Minnesota, is now at a point in his life where he is giving away his books, lots and lots of books.

“My wife and I have five children and my collections had taken over our house and all of our storage room,” he said. It was time.

He has given over 1,500 top-shelf scholarly gems to UMD.

John is making the donation to UMD's Kathryn A. Martin Library and the blossoming Mishoomis Collection Library in the American Indian Learning Resource Center (AILRC). Matt Rosendahl, the library director, helped the transaction with a rapid cataloguing process. "John's collection consists of American Indian/Alaskan Native scholarly research materials," says Matt. "John’s books are unique because they cover the indigenous people, not settlers, from South America to Canada during the development of the western United States from 1700 to 1900." 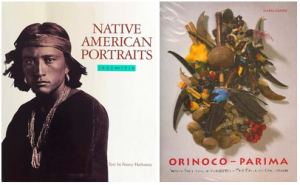 Four of John's favorites: 1) Native American Portraits 1862-1918, by Nancy Hathaway. Over 100 haunting images of warriors, medicine men, and families from many tribes taken between end of the Civil War and the end of World War I by photographers including Alexander Gardner and William Henry. A factual, anecdotal, and visual history. 2) Orinoco-Parima: Indian Societies in Venezuela - The Cisneros Collection, by Herzog-Schroder, Gabriele et al. This book presents essays about the culture of Amazon Indians as well as photos of masks, ritual objects, feather decorations, cooking utensils, and weapons.

“The Mishoomis Library is a perfect fit,” he said. “UMD already has people coming to campus to use the library. It already has students across campus using the books. Students in the American Indian programs especially use it as a resource for class discussion and papers.”

The Mishoomis Library is a force in its own right. When John offered 2,400 books to UMD, the Mishoomis Collection already had about 900 of them. John is giving the duplicates to Fond du Lac Tribal and Community College, the Fond du Lac Reservation Community Center Library, Red Cliff Reservation, and Bayfield Schools Library. 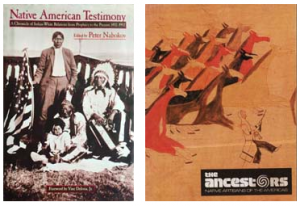 3) Native American Testimony, by anthropologist Peter Nabokov. In a series of powerful and moving documents, this work presents a history of Native American and white relations through Indian eyes and voices. 4) The Ancestors: Native Artisans of the Americas by Museum of the American Indian. Historical documentation includes art genre and cultural context for Sioux, Karaja (Brazil), Haida (Northwest coast), Panama, Pomoans of California, Araucanians of Chile, and pre-Columbian cultures.

“It's like giving away my children,” John said. “All my collections have given me much enjoyment over the years and much, much more information.” But going forward, John wants his collections to have a new life where they can give enjoyment and information to many people.

John is still looking for a home for his collection on shamanistic practices around the world. "There are secrets in those books: medicines and rituals," he says. The shamanism collection has information from the present back to life 15,000 years ago, long before civilization. “It has opened my eyes to many directions,” he said.

Great Volumes in a New Home

As a bit of a challenge, John has selected four books for people interested in the collection to review (see photos and descriptions). "These are a few of my favorites," he says. "You'll see gorgeous photography, incredible objects, and narratives about brutality and courage... it's all there."

The Mishoomis Collection is an incredible treasure,” John says. “My books will add to the depth of the collection. This is the legacy I’ve always dreamed of.”

About the Mishoomis Collection Library