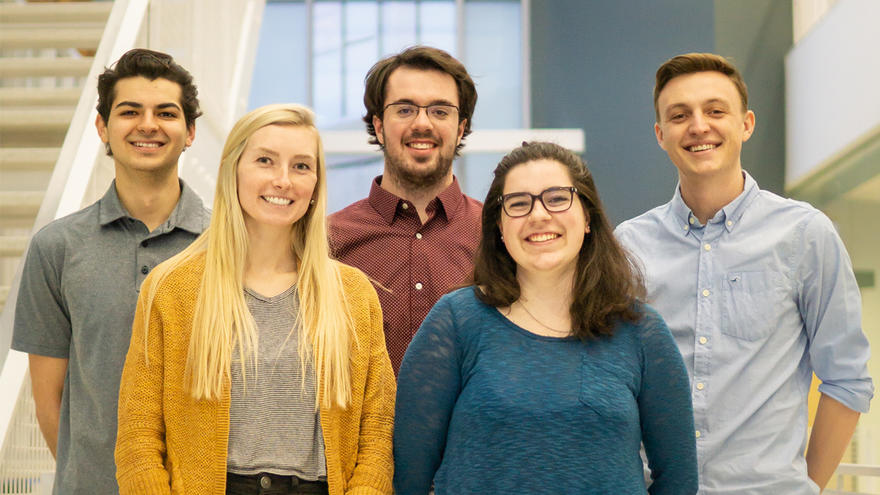 Increasing the awareness of proper trash sorting was the goal of a class project.

STOP! Before you put that next item in a campus garbage can, take a moment to think about if it truly belongs there. Overall, the campus community has not understood how to throw their disposable items away. In fact, only 47% of items in trash bins across campus has been actual trash, according to a UMD waste audit.

Taking the data from that audit, the student team of Megan McCarty, Riley Primus, Cole Sherwin, David Voss, and Grace Wateland worked with UMD’s Sustainability Office to tackle the garbage problem as an assignment for LSBE’s Advertising and Marketing Communications class.

They comprised one of eight student teams that took on class projects and operated as if they were real advertising agencies working for clients.

“I connected students with local businesses or communication initiatives so that they got very close to real-life situations,” said Marat Bakpayev, assistant professor of Marketing. To ensure that students felt more like they were working as ad agencies, Dr. Bakpayev had either an LSBE Marketing and Graphic Design student or SFA Graphic Design and Marketing student on each team who assumed the role of creative director.

For the fall semester-long project, the students who wanted to bring the garbage issue to the campus’s forefront conducted research, surveys, and interviews and developed components for an awareness campaign targeted at students—though most everyone could use some guidance in garbage disposal.

“Our hope was to help students and staff recognize correct trash sorting,” said Primus, a senior and one of this team’s Marketing and Graphic Design majors.

Sherwin and McCarty brought the idea of partnering with the Sustainability Office to their team, and the group established the trash audit and campaign—which the team branded Do Your Part—as their project.

“Megan and I had previously worked with the Sustainability Office in another class,” said Sherwin, a senior who has a Marketing major and Sustainability minor. “We found the knowledge we gained there to be beneficial and applicable in our own lives and wanted to share it with others.”

UMD Athletics and Kirby Student Center also played a part with the campaign, which features various forms of advertising mediums. One component is a video that is to be played around campus and at sporting events. Other parts of the campaign are posters, radio spots, social media posts, events, information on food-court trays, and garbage can stickers.

“Our idea was to start small, only in certain areas of campus, and hope that this initiative would grow to be a campus-wide project,” said McCarty, a senior who is a Graphic Design and Marketing major.

The anticipated result of Do Your Part is that as of December, 2020, the percentage of incorrectly disposed of waste will have decreased 5%.

Additionally, the group anticipates that the knowledge gained by people from the campaign will have a greater impact.

“We hope that if the students participate in these acts on campus, they will continue them in their daily lives and into the future,” said Wateland, a senior Organizational Management major with a Marketing minor.

“As a group, we are excited to see what the impact will be,” said Voss, a senior Marketing major.

So what was the other 52% that wasn’t trash and should have been disposed of in a different bin? Of that amount, 27% was compostable, 21% was recyclable, and 4% was liquid.

The final project is in the hands of the Sustainability Office to implement.