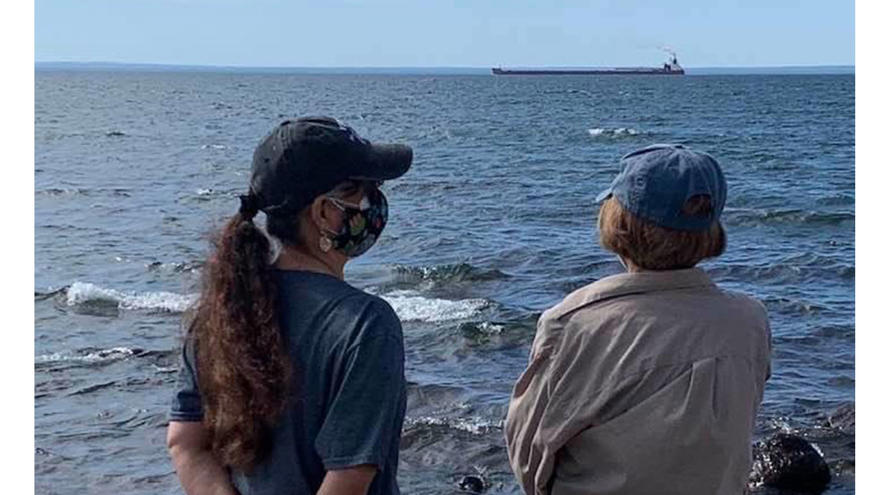 A $1,077,000 grant from the Andrew W. Mellon Foundation is allowing University of Minnesota scholars to explore an alternative methodology for environmental problem-solving.

The Environmental Stewardship, Place & Community Initiative is driven by humanities faculty. The approach being taken isn’t new, it’s informed by traditional Indigenous knowledge, which emphasizes nature as sacred and the interconnectedness between people and the environment.

“People are beginning to realize Indigenous people have been able to live for thousands of years as good relatives to the natural world, without damaging it—that they may have answers to issues facing the world going forward,” explains Roxanne Gould, associate professor in the University of Minnesota Duluth’s Department of Education and Ruth A. Meyers Center for Indigenous Education.

The project has participation from three University of Minnesota campuses (the Twin Cities, Morris, and Duluth). Gould and Assistant Professor Wendy F. Smythe, UMD's Department of American Indian Studies, are leading the UMD portion of the project, which is an Institute for Advanced Study initiative that started in the summer of 2019.

Each campus team is tasked with engaging local community partners to identify local environmental issues and work collaboratively to develop potential solutions. The Morris group is working with the Dakota community on food sovereignty issues. The Twin Cities project focuses on reclaiming Dakota homelands to build sustainable, off-grid communities. The UMD project is prioritizing the protection of the Lake Superior watershed with its extensive network of 200 tributaries.

Water is plentiful in Minnesota, with access to more than 10,000 lakes. But Gould stresses that clean water shouldn’t be taken for granted. “We assume because there’s so much water in our state that it will be good, potable drinking water,” Gould says. “But drinking water is a huge issue around the globe. And 40 percent of Minnesota water is terribly polluted.”

Gould is Grand Traverse Band Odawa/Ojibwe and her work lies at the intersection of education, sustainability, and Indigenous connection to place. This project will expand upon Gould’s recent research, which involved interviews with 26 Indigenous women activists from across the United States that touched on how water scarcity, rising water levels, climate change, development, and oil pipelines jeopardize community water supplies.

Gould notes that American Indians have strong ceremonial, cultural, and subsistence traditions linked to water. “Indigenous people look at the Earth as mother and water is her lifeblood. They recognize water as sacred and the source of life,” she says. “Therefore, how should you be in relationship with water? You certainly shouldn’t treat it as a commodity. You’re always conscious of that sacred relationship.”

Indigenous women—and mothers in particular—have an especially strong connection to water. “Our first home is water. We carry our children in water,” Gould says. “In ceremony, it is always women who speak for the water.”

It was important to Gould to assemble a strong cohort with varying yet complementary expertise to work on the project. She enlisted Smythe as a co-leader due to her scientific background as well as her proven ability to integrate science education with Indigenous knowledge.

Smythe, who is Alaska Native Haida, is an assistant professor with a joint appointment in the Department of American Indian Studies and the Department of Earth and Environmental Sciences. She has worked with tribal communities to bring her expertise in geoscience and oceanography to K-12 educational settings.

The idea is to help build confidence in Native children to learn about and appreciate science. Smythe has done this by finding ways to creatively couple science with traditional stories as well as relate science back to Indigenous life.

“These kids know more than they think they do. If you ask them ‘Do you know science?’ they say, ‘No.’ But many of them by age 8 are hunting and fishing to help feed their families,” she explains, noting that these skills require a great deal of knowledge about the natural world.

Curriculum development is one of the deliverables of the Indigenous Women’s Water Sisterhood project. Smythe notes that local Anishinaabe people have cultural connections to water that can be tied to scientific learning and anticipates creating lesson plans for different grade levels. She adds that integrating the two distinct systems of knowledge in this way can help give students critical thinking advantages.

Additionally, the group plans to work with faculty at UMD to develop toolkits to prepare them to respectfully and thoughtfully engage with students about issues that relate to American Indian people, such as the fact that UMD was built on ceded land.

The Sisterhood also intends to work with the City of Duluth to create educational signs for the lakewalk, both in English and Ojibwe, about the history of Lake Superior from an Indigenous perspective as well as policies that impact the lake.

Smythe and Gould are hopeful the relationships they establish with tribes, scientists, educators, policymakers, and other stakeholders will help to extend the project beyond the life of the grant, which ends in two years. Ultimately the goal is to “tie it all together and be able to influence regional decision-making” as it relates to water policy, according to Smythe.

Image: Roxanne Gould and her mother making an offering of asema (tobacco) at Lake Superior.