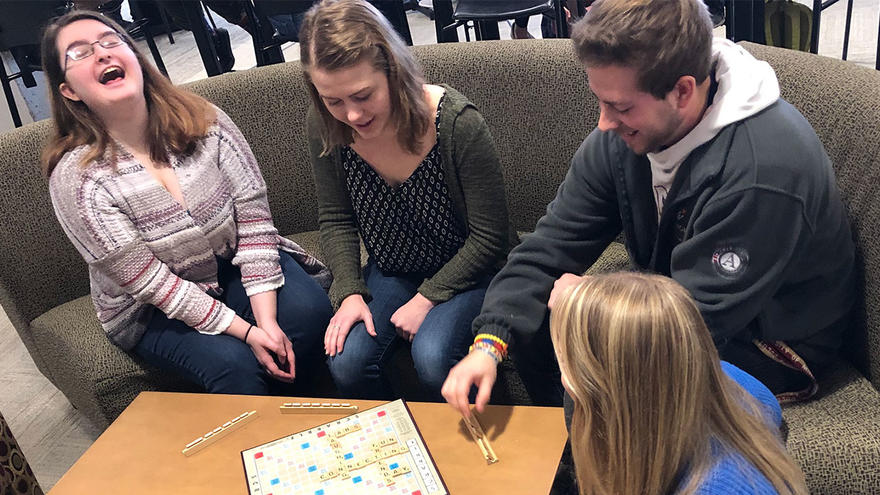 Students invite others to declare their independence from technology.

You feel knots tangle in your stomach. Your breath quickens just the smallest bit, and your palms dampen. You hold onto the arm of the chair to steady yourself and take a deep breath. In and out. There are students sitting all around, but no one makes eye contact with you. Each one of them is looking at a screen: scrolling through social media, texting friends, snapping selfies. You pick up your phone on the table and then stop. What if you put it down?

That is exactly what UMD students Kelly Gilomen, Kendra Kvebak, Trevor Peterson, Tiana Forbes, and Paige Wagner decided to do. They put their phones down.

These five students are challenging the UMD campus to join them on Connection Day, Tuesday, February 18, 2020. Kelly, Kendra, Trevor, Tiana, and Paige invite you to join them by unplugging from technology and connecting with other UMD students. They’ll be tabling for Connection Day in the Kirby Garage and the rest of campus, from 10 a.m. - 3 p.m. They've written an editorial for The Bark student newspaper and designed posters to put up around campus. 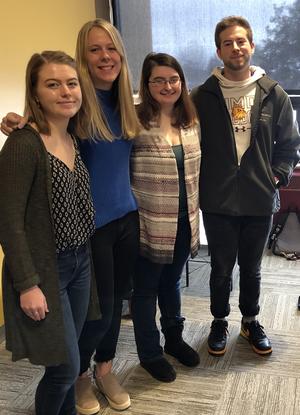 They are partnering with Kirby Student Program Board to provide fun activities and making name tags to help students introduce themselves to each other. The library is also sponsoring events in the Zen Den in the Library Annex.

Everyone is welcome to participate in Connection Day. The group calls it a "chill version" of Welcome Week. Creating Connection Day comes from a real need. Each of the students have a story to tell.

The Road to Connection

Kelly Gilomen: Kelly’s story starts in her nutrition class, which was held in a large lecture hall with around 100 students. She arrived before the 10 a.m. class started, sat in a fixed seat, and looked around.

Kelly says that almost everybody was on their phone unless they were sitting next to a friend, “Everyone just stays in their little cube of space.” 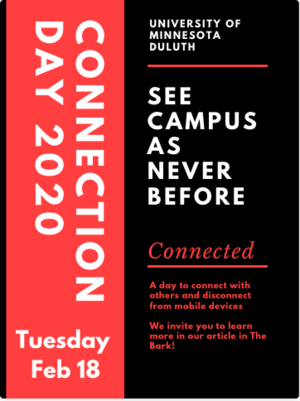 Kelly is especially aware of connections, because she is a transfer student. She didn’t have a group of friends who met during their first year, and she’s consciously trying to reach out. Unplugging has helped. “I’ve made a lot of friends… I feel like I’m really involved in the class, and I’m getting more out of the class because of it.”

Kendra Kvebak: Kendra’s first unplugging experience happened by accident. “In high school my phone broke, and my parents refused to buy me a new one, so I didn’t have a phone for like two months.” Being a student without a phone in Detroit Lakes sometimes felt isolating, but Kendra emphasizes that she felt more alive after unplugging.

Kendra agrees that If all goes well, the group would like to make this a recurring event. She said future Connection Day activities could include game nights and even the life-sized board game Settlers of Catan.

Trevor Peterson: The negative experience of navigating the UMD hallways inspired Trevor to join the Connection Day effort. “It’s frustrating to walk down the main hallway…everyone is just bumping into each other...no one’s looking up.”

He says he wants to see change. “I’d like to see people engaging with each other.” In an effort to “un-zombie” himself, Trevor decided to detox from social media apps like SnapChat and Instagram.

When he unplugged, he lost a main way to connect with a military friend stationed in Virginia, so he wrote letters to him. “It was fun to send a letter,” he says. “It felt refreshing.”

Trevor and the friend sent letters back and forth for a few months. “It was fun getting them back, in return, from him.” Trevor enjoyed receiving a letter in the mailbox, instead of news or bills. It created enjoyable moments of surprise.

The detox wasn’t Trevor’s only reason to support Connection Day. His research on college student social media usage and the associated negative correlations were “heartbreaking.” He found that 20% of college students experienced depression. He said that he knows everyone “has their own stuff,” but he wanted to help show what a break from technology could do. “I’d like to see people engaging with each other. I just think social connection is so important.”

Paige Wagner: Paige’s story echoes Trevor’s views. She fears for the safety of some people in the hallways, especially those with visual impairments, due to the inattention of people who are glued to their phones. In Paige’s family, nearly everyone on her father’s side is legally blind.

In an effort to experience what it would be like to be visually impaired, Paige recently underwent some mobility training. She walked down a hallway blindfolded, with only a cane for guidance. Paige said that people ran into her simply because they just didn’t care to pay attention. Being only 5 feet 2 inches tall is also an obstacle for Paige when it comes to the halls of UMD. “Even without the blindfold, it can get scary sometimes,” she says.

These UMD students brainstormed the Connection Day initiative in fall 2019 in the Advanced Writing for Human Service Professions class. Susan Perala-Dewey, a faculty member who taught the class, and Associate Professor Jennifer Moore encouraged the students to make the project a reality.

They are urging the community to unplug from day-to-day pressures for a short time. They’re inviting people to disconnect from technology and enjoy some face-to-face quality time for just a few hours. And they are certain it will make a difference.

This story was written by UMD students Izabel Johnson, who is majoring in journalism and minoring in communication, and Bailey Jacobson, who is a double major in English and writing studies. Izabel and Bailey work with Cheryl Reitan in University Marketing and Public Relations.

More about the College of Liberal Arts

More about the College of Education and Human Service Professions