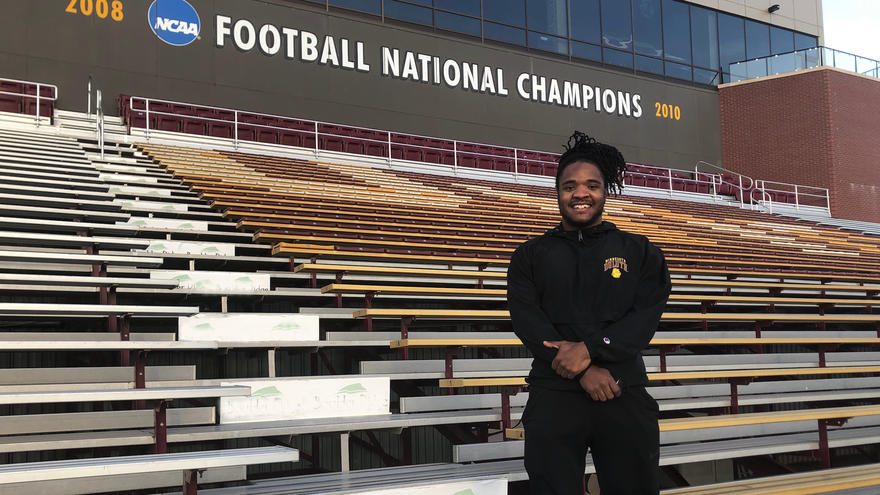 Cazz Martin aspires to take his future to the next level.

In 2011, there was a special person in Cazz Martin’s life. He called her his “football mom.” Several days each week, Martin arrived at his football mom’s house on his bike. When entering her house, he left the worries of school behind and instead indulged in playing video games, eating pizza, and staying out of trouble. 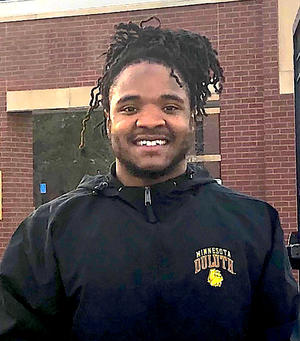 Mrs. Strife was Martin’s football mom. She was his middle school teacher in Chicago's South Side. She had noticed his unacceptable behavior in class, but she didn't punish him. Instead, she told him she knew what it was like to grow up in a bad neighborhood. She promised she was going to help him. Martin would never forget that kindness.

Later, the Martin family made the move from Chicago to Rochester, Minnesota. Their goal was to escape the inner city violence, to find a safe place to grow, and to succeed. This move eventually brought Martin to a Rochester high school and then a community college football team. Finally, he arrived at UMD, where in 2020–21, he is a Bulldog football running back.

Even with Mrs. Strife's support in middle school, Martin didn't take his high school courses seriously enough. He loved football. His coaches called him a great player, and Martin thought that was all he needed to stay on the field.

Everything changed when his low G.P.A. in high school didn’t get him into a university. Martin took an alternate route, community college.

He was still able to play for the Yellow Jackets at Rochester Community and Technical College. That’s when his football coach had a serious talk with him. “He told me if I didn’t have at least a 2.5 G.P.A., I could kiss football goodbye. I realized that junior college would give me a second chance.” Martin dedicated up to five hours each day in the college learning center with his tutors.

At the same time, he posted his football highlights on Twitter. After seeing Martin’s moves on social media, UMD Head Coach Curt Weise and Assistant Coach Marcus McLin went to Rochester to witness Martin's talent for themselves. After Martin graduated with his A.A. degree with a 3.6 G.P.A under his belt, he received a scholarship to play football at UMD.

His academic career and his athletic career took off. During Martin’s first university game in UMD's James S. Malosky Stadium, he noticed his family watching from the stands. “Coming from South Chicago, and growing up in Rochester, I never thought I’d play for a big university like UMD.” says Martin.

Martin’s first play took him dashing down the field, catching a toss, and leaping over an opponent. “In that first game I made a highlight play," he says. It was captured in a video. "I didn’t believe I could perform that well, but I did it.”

Martin has a special mentor, Marcus Sherels, a graduate from the same high school as Martin and a player for the Minnesota Vikings. Sherels believes Martin can run so fast, he has the potential to be drafted for the NFL. That confidence gave Martin strength to train his hardest in the 2020–21 season, in spite of the restrictions of the pandemic.

Towards A Successful Future

Martin isn’t only succeeding in football, he has also been honored by the College of Education and Human Service Professions as a physical education student. In the summer of 2020, he received the Maulius and Mildred Brink Education Scholarship. “It felt good to be recognized for my academics, in addition to athletics,” says Martin.

He plans to use his degree to become a football coach or phy-ed teacher. "My grandmother always told me to get an education," Martin says. He will be one of the first in his family to graduate with a bachelor’s degree.

Martin volunteered at Laura MacArthur Elementary School in Duluth. “Bonding with the young athletes is something that I look forward to doing every year,” says Martin.

When Martin returns home to Rochester, he coaches flag football to third and fourth grade students. People in his community call him a “hometown hero” and repeatedly tell him he has a “God-given talent.”

Martin listens to his mentor Sherels and stays on a path that can get him into the NFL someday But he has an equally important goal. He wants help others and change lives. He wants to give back to the community. Martin says he goes about life with this motive, “Life is about giving to others and helping out those who don’t have the opportunity I have.” Because so many people have helped him, including his football mom, Mrs. Strife, he says, “I feel obligated to help change people's lives and steer them in the right direction.”

About the UMD Physical Education Bachelor of Applied Science program