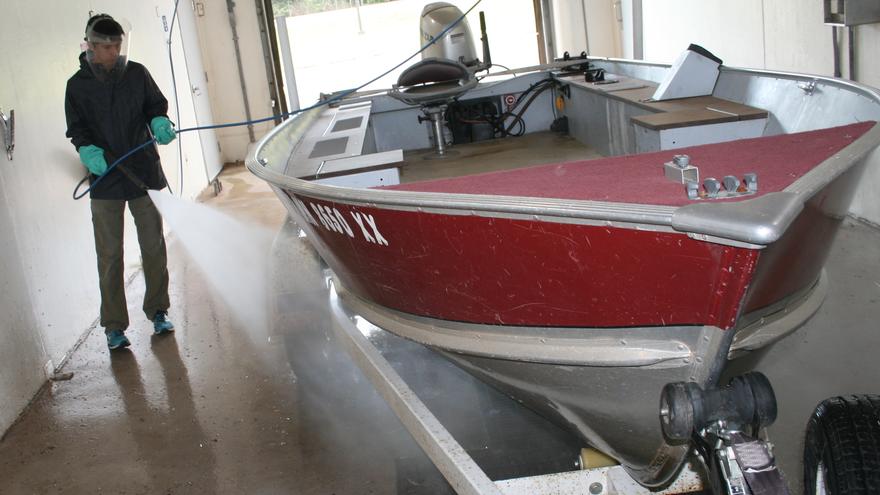 Anglers aren’t the only ones who need to worry about clean-drain-dry. NRRI researchers travel from lake to lake to study the impacts of aquatic invasive species, among other things, and they sure don’t want to contribute to the problem.

The solution –a high temperature, high pressure wash station with a specially engineered drainage system – was expensive. So Aquatic Biologist Josh Dumke sought another solution off site that could benefit more than just NRRI scientists.

A local car wash had almost everything needed, except the super-hot water.

“Our target is water temp of 150 degrees Fahrenheit,” said Dumke. “Hot, hot water and high pressure will get the job done fast. It can kill many aquatic species in seconds.”

Mike Podgornik, owner of Corridor 53 Car Wash, had the truck and trailer length bay with two spray wands. Working with NRRI, a boiler was added to achieve the hotter temperatures with a controller that only NRRI researchers can activate under a 10-year contract to reimburse the boiler expense.

Most importantly, the water runoff goes to the Western Lake Superior Sanitary District for processing before being released into the St. Louis River, which flows to Lake Superior.

“The St. Louis River Estuary has the most invasive species in the whole region and we’re doing a lot of work there,” said Dumke. “Before we go anywhere else, such as inland lakes, we decontaminate our gear, boats and trailers. And now we can do it quickly by just pulling into this car wash.”

NRRI is working with Podgornik to expand safe invasive species decontamination services to other users, like agencies and Universities doing water research, or fire and police water rescue squads.

“This is a really creative and collaborative solution,” said NRRI Executive Director Rolf Weberg. “And it’s always a bonus when we can extend great ideas beyond our own walls.”