Race to a Degree 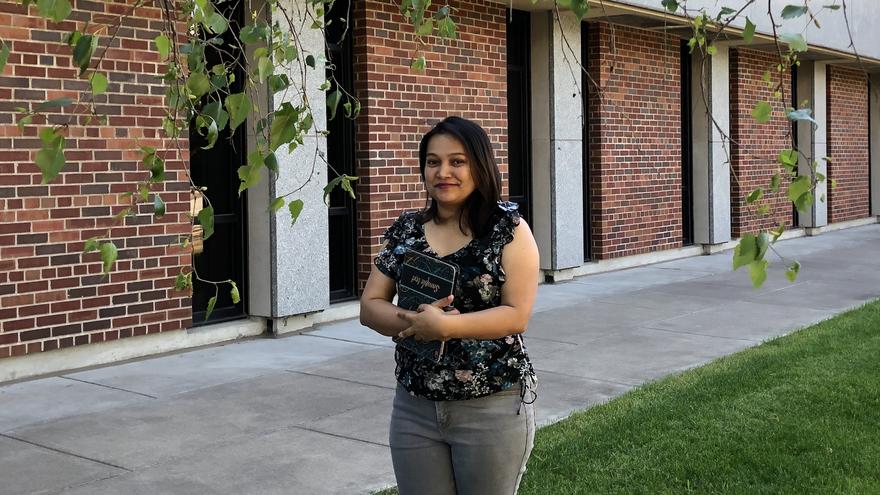 Asmita Ghimire, a graduate student in the Department of English, Linguistics, and Writing Studies (ELWS), stood at the front of the room and presented a research project she had been working on for nine months. Elizabethada Wright, an ELWS faculty member and co-author of the paper, sat with the rest of the crowd in the packed Minneapolis conference room.  Ghimire’s project focused on the racial bias non-native English speakers receive, particularly those in the United States.

When Ghimire finished, one person in particular asked her some hard-hitting questions. Ghimire admits she was a little nervous as she presented her research but she felt more confident as she answered all of the questions. Another conversation immediately after her talk gave Ghimire even more confidence. She was approached by a faculty member from the UM-Twin Cities, who invited Ghimire to apply for an open staff position. The person said, “We need people like you.”

Later, at the featured presentation, Ghimire and Wright were surprised to see the keynote speaker was the same person who asked Ghimire all of the “hard hitting” questions. She was Meredith McQuaid, the associate vice president and dean of international programs at the UM-Twin Cities. Wright said, “McQuaid started talking about the amazing papers and singled out Ghimire for the brilliance of her work.”

Ghimire traveled to the ELWS department at UMD in 2019 to work on her second masters degree. She already had received a masters degree in Nepal and had presented lectures and taught English classes at Kathmandu University.

When she traveled to UMD, she faced a tough situation. For a variety of reasons, she wasn’t allowed to be the instructor of record for classes in her department. Additionally, the funding for graduate students in the English M.A. program had been stopped.

These difficulties didn’t stop Ghimire. With Wright’s assistance, she turned her roadblocks into an opportunity. She decided to complete the two year degree in one year. She began to research the topic of transnationalism and multilingualism in the rhetoric and composition classroom, building on the existing research regarding microaggressions against international faculty, specifically international faculty who didn’t have white skin. Additionally, she started publishing.

Ghimire’s research found that most American students do not speak more than one language and that the U.S. student viewpoint considers American or British Englishes the only correct versions. In reality, East Indian English, and Nepalese English and other forms are different from American English, but they all are part of the English language.

“Students in the United States grow up thinking ‘my way is the right way,’ yet we are increasingly in a transnational world,” says Ghimire. “People have to be able to communicate effectively with people all over the globe. English is becoming a lingua franca, but it's not only American English.”

Wright added, “There are some people who think that what we teach in writing classes is grammatical correctness. That is not what we teach, because language is always changing, and what is considered correct is changing as well. Instead, we teach students how to write appropriately in given situations, and many of the situations that students will be given in the future will involve non-American Englishes.”

Ghimire found through personal experience and her research that “racial bias also plays a role in how non-native English speakers are perceived.” She makes the point that non-native English speakers have an important role in teaching, and multilingualism should be introduced in all classrooms. Additionally, Ghimire says, “There's a huge amount of research about the microaggressions and bias” among students who aren’t exposed to people from cultures different from their own.

In fall 2019, Ghimire wrote a paper for a graduate class, Teaching College Writing. Wright could see it had the potential to be considered for an upcoming publication in a special issue of the journal, Academic Labor: Research and Artistry. With the deadline looming, Ghimire and Wright revised the paper and submitted it. Weeks later, they found a second call for papers on a similar topic. Again, Ghimire and Wright used Ghimire’s data to reach a second audience: both submissions have resulted in forthcoming publications.

Ghimire’s English M.A. Plan B, "Reading the Protest Signs: Justice System as 'Rapist,' explores yet a third angle of transnationalism, and it too has been accepted for publication.

The University of Texas El Paso is Ghimire’s next destination. She plans to get her Ph.D. in rhetoric and composition with an emphasis on critical digital humanities, transnational rhetoric, and transnational feminism.

UMD wishes her well and looks forward to seeing more of her work in academic journals.

About the Department of English, Linguistics, and Writing Studies