A Lifetime of Music 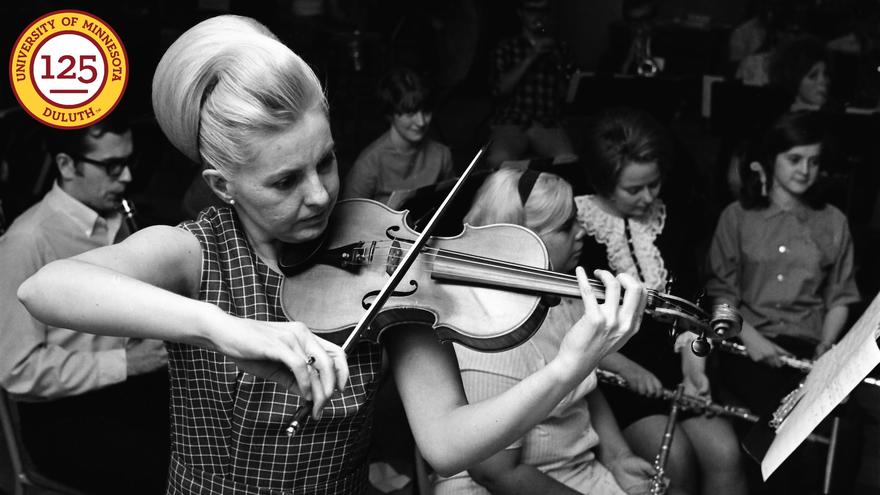 It is 1956. The crisp violin notes reverberate in a basement room of Olcott Hall. Deep inside the Georgian mansion, music student Ann Carlson is practicing for the UMD orchestra. The notes strike against the plaster walls. The room, formerly used to store coal that heated the huge house, provides a sound barrier between Ann and the rest of the world.

The practice rooms, two floors above, have gleaming wood floors, carved woodwork, and huge windows that look out on Lake Superior and one of Duluth’s opulent neighborhood. The rooms are filled with other music students, all practicing. But on this day, Ann can’t practice there. She needs solitude. The orchestral piece she is working on is difficult, and she needs to concentrate. 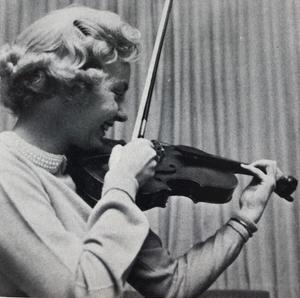 Ann as a student at UMD

After those moments as a student at UMD, Ann went on to a long career. Her story, both before and after her time in the coal room, is rare and remarkable indeed.

Life wasn’t always easy. Ann grew up in Austin, Minnesota, where she proved to be extremely talented in music and a good student as well. She was named the high school salutatorian and received partial scholarships to Carlton and St. Olaf colleges. But the cost of the rest of tuition and living expenses at those colleges were still too much for her family to support.

By the end of her senior year, the prospects for college looked bleak. But Ann’s role in the Austin High School Orchestra and her performance at the Big 9 Festival changed everything.

Southern Minnesota had a special yearly event called the Big 9 Festival. It had its first year in 1927 and is still the oldest music festival of its kind in the United States. To this day, it showcases select high school ensembles in southern Minnesota. Every band, orchestra, and choir shows up from area schools that include Albert Lea, Austin, Faribault, Mankato, Northfield, Red Wing, Rochester, and Winona.

It was spring 1953. “I was at a practice for the Big 9,” Ann says. "Students from all the schools made up the orchestra; and we had a guest conductor, Herman Hertz from the Duluth Symphony." During the practice, all of the orchestra conductors from all of the schools were walking between the students. "I didn't really know what was going on but when the piece was over, I had been named the concertmaster."

That concert led to another opportunity; she was invited to apply to UMD. Unknown to Ann, developments were falling into place. Mr. Hertz returned to Duluth and met with Gus Andreson, who was on the board of the Duluth Symphony. Hertz also met with the UMD music faculty band conductor Pete Magnell. Gus Andreson made Ann an offer. In exchange for Ann's full tuition as a violin major, Ann would perform as a student member with the Duluth Symphony.

Ann began attending UMD in 1953 on the full ride scholarship. She played piano and performed in the UMD orchestra as a gifted violinist. She also played clarinet in the band, but she admits, “I wasn’t very good at the clarinet.”

UMD provided Ann with an education, musical experience in the orchestra and the band, and life experiences like eating eyeballs and worms. Well… that's a story. 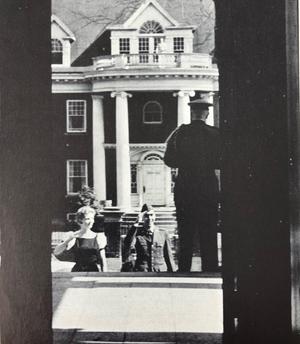 Looking at Olcott Hall from the entryway of Tweed Hall in the mid 1950s.

Piano teacher E. Ruth Van Appledorn was Ann’s favorite. Miss Appledorn was the faculty advisor for a music club known as the Buckhorns, and they had a special initiation for new members.

Ann’s initiation involved blindfolds, eyeballs (peeled grapes), and rattlesnake meat. The freshman were blindfolded and instructed to eat or touch something. Ann did neither. She ran away screaming, dodging her slimy fate, and sending the rest of the group into unstoppable laughter.

Classes and music practice filled Ann’s days. Most of Ann’s classes were at the lower campus. Only five buildings were on the upper campus at the time: the Science Building, Athletic Building, Kirby Student Center, ROTC, and the Vermilion Hall residence, although more construction was on the way.

The music students spent lots of time in opulent mansions. “Olcott Hall was the music center,” says Ann. Olcott Hall, at 2316 E. First Street, is noted for being Duluth's most impressive example of Georgian architecture, and it was a treat for Ann and her classmates to spend time there. The home was donated to the Duluth State Teachers College (DSTC) in 1939 and sold in 1958.

Across the street, at 2309 E. First Street, was Tweed Hall, the location of UMD’s Arts and Humanities Department. “The art students had their classes there, and there was a gallery for art exhibitions too,” Ann says.

Ann spent many days in Tweed Hall’s carriage house, or as she calls it, “the garage.” That’s where the orchestra practiced. Recitals were held in the living room.

Tweed Hall was a grand mansion for those fortunate students. It was built in 1908 by Joseph Cotton, a lawyer, and sold to George P. and Alice Tweed. The Tweed family donated the Italian Renaissance mansion to the DSTC in 1941.

The two halls, along with the Old Main auditorium, offered lots of places for students to perform concerts, musicals and operas.

Out in the World 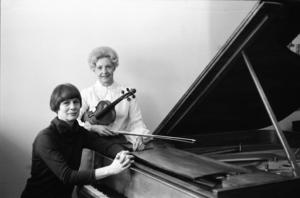 Pat LaLiberte, at the piano, and Ann, with her violin, traveled to area schools to give concerts and encourage students to come to UMD. This photo is from 1982.

Ann turned to music for solace. She threw herself into her work and took her first professional position as a violinist with the New Orleans Symphony. She went on to stints with the Indianapolis Symphony, the Metropolitan Opera National Co., the Aspen Festival Orchestra, and the American Arts String Quartet.

In 1968, Ann was giving concerts with the American Arts String Quartet based in Green Bay, Wisconsin. They had been recently flown to Duluth twice to perform with the Duluth Symphony, but one day, Ann received a different kind of call. It was from UMD. There was an opening for a music teacher, and UMD wanted her to apply.

Ann returned to UMD to teach the musical arts. “It felt like home,” Ann said. “I had so many friends here, and the students were so eager to learn.” More than ever, the days were busy with class, private lessons and concerts.

During this time, Ann became one third of a musical ensemble with Pat LaLiberte, who played the piano. Sometimes Eugenia "Jeanie" Slezak, who played the cello, joined them, especially when they traveled to high schools across Northern Minnesota. They performed and encouraged students to attend UMD after graduation.

Among the many awards Ann has received over the years is the 1992 Master Teacher Award from the Minnesota American String Teachers Association and the honor of serving as an outreach artist by the St. Louis County Heritage and Arts Center. In 2012, Ann was inducted into the School of FIne Arts' Society of Prometheans. This honor recognizes individuals who have demonstrated passion, commitment, and talent to achieve the highest levels of excellence in their art and profession.

Now, Ann is happily retired. She drives around Duluth to events nearly every day and continues to play music. Every year, her scholarship, the Ann Carlson Anderson Symphonic String Scholarship, is presented to a UMD student. And she still performs in the Duluth Superior Symphony Orchestra and holds the title as the Associate Concertmaster Emeritus.

“Coming back to UMD was one of my best decisions,” she says.

The banner photo at the top of the page is of Ann Anderson at a UMD orchestra practice in 1969.

About the School of Fine Arts