Improving the Lives of Older Adults 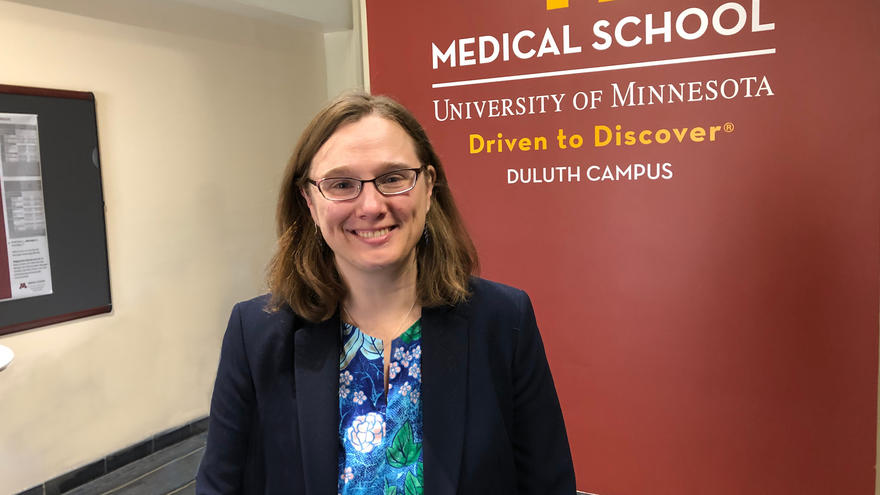 “Reminiscence therapy uses all the senses — sight, touch, taste, smell and sound." It helps patients regain a sense of their personal history.

“Many years ago I had an elderly patient who suffered from a condition that left her unable to express herself,” says Amy Greminger, a faculty member in the University of Minnesota Medical School, Duluth Campus. “As a physician, it was my job to treat her physical illness. This is challenging when there are communication barriers.” After noting a decline in the patient’s condition, Greminger worked to treat the patient’s medical condition, but the patient still struggled.

Greminger spoke with the family and care team: nurses, a social worker, and certified nursing assistants (CNA’s) about the timing of the decline. It correlated with the time when the patient's friend was no longer able to visit. Because of this information, the team decided to focus on wellbeing, and was able to get the resident on a list for regular pet therapy.

“The patient began to improve. Consistent visits from a pet brought a lot of joy,” says Greminger. “We will never know if she got better on her own or if it was because of the pet therapy.” Greminger acknowledges that a combination of factors affect a patient’s health. “There is one thing I do know: having meaning in one’s life makes a difference."

The Data
Greminger says it’s important for all medical doctors to stay abreast of developments in elder care because the number of people in the aging population is growing at a staggering rate. According to the Center for Disease Control, the population of U.S. citizens over the age of 70 is predicted to increase from 37 million to 66 million people by 2030. Now, in 2019, according to the Alzheimer’s Association, an estimated 5.8 million Americans of all ages are living with Alzheimer's dementia. Furthermore, by 2050, the number of people age 65 and older with Alzheimer’s dementia may grow to a projected 13.8 million, barring medical breakthroughs to prevent, slow, or cure the disease.

The situation is especially concerning to Greminger because, in addition to her work at the medical school, Greminger is a physician on the hospice care team at Essentia Health in Duluth. She often cares for people suffering from dementia.

“Patients need to find meaning and purpose in their lives as dementia progresses,” she says. “We see patients who have lost many of their family connections. Most are unable to do their previous jobs, and their sense of purpose is diminished.” As physicians, Greminger and her colleagues are starting to look past the physical ailments of patients in order to help them maintain a sense of who they are.

Finding Answers
A few years ago, Greminger and a medical student  reviewed the literature about which activities maintain the quality of life for nursing home patients. The results shaped Greminger’s current practice.

“We found that an integrated approach on the side of the caregiver was beneficial," Greminger says. "When physicians joined forces with case managers, nurses, CNA’s, chaplains, social workers, and specialized therapists, good things happened. When all aspects of a person were considered, and specialized therapy was introduced, the quality of life was much higher.”

Specialized therapy for patients includes art therapy, music therapy, pet therapy, and even reminiscence therapy. Greminger explained how reminisce therapy allows patients to conduct a life review with a caregiver, and how it helps patients regain a sense of their personal history.

Singing a popular song, eating a chocolate-covered cherry, getting a nuzzle from a dog, or smelling a rose, are all forms of reminiscence therapy.

“Reminiscence therapy uses all the senses — sight, touch, taste, smell and sound. It can take the form of art, where residents make magazine collages depicting moments in their lives,” she says. It can be as simple as making a book of a few important photos. Singing a popular song, eating a chocolate-covered cherry, getting a nuzzle from a dog, or smelling a rose, are all forms of reminiscence therapy.

Greminger also discusses the importance of providing a wide range of activities to nursing home residents because of the benefits they provide. “Bingo is a common activity in memory care centers,” she says. “It isn’t so much playing the Bingo game as it is attending a social event, visiting with other people, and connecting to a past life activity.” Sometimes it’s just the anticipation of the event that is stimulating to a resident. “It’s an opportunity for residents to reminisce and remember who they are,” Greminger says.

Lessons for Everyone
When Greminger began teaching at the medical school in 2017, she was able to help lead a week-long course for first year medical students covering end of life care. “So often people approach death as the failure of medicine. It’s hard for them to face mortality.” says Greminger, “We try to teach our students to work with the family to have a better death for the patient — to help relieve pain and suffering even when we can’t cure the underlying illness"

As a teacher, Greminger has the opportunity to share her love for elder care with her students. “I find hospice and elder care immensely rewarding,” says Greminger, “The work I do reminds me of why I went into medicine in the first place. "Medicine can be stressful, but is so fulfilling to help elderly individuals have a sense of self and truly be at peace.”

Greminger doesn’t forget the simple things that make a difference. “Setting the table, watering flowers, or taking care of baby dolls can bring back that sense of meaning,” says Greminger. ""It's beautiful to help patients with what they can do instead of focusing on what they can’t."

About Memory Keepers
Greminger is affiliated with the Memory Keepers Medical Discovery Team at the University of Minnesota Medical School Duluth Campus. The team is focused on understanding the dynamics of diabetes and dementia as interacting conditions among people living in tribal and rural communities. Led by Dr. Neil Henderson (Oklahoma Choctaw), the team works to preserve brain health by collaborative, community-based research and care.

This story was written by UMD Marketing and P.R. staff member Cheryl Reitan and student employee, Nora Curtis, a biology major with a minor in professional writing.